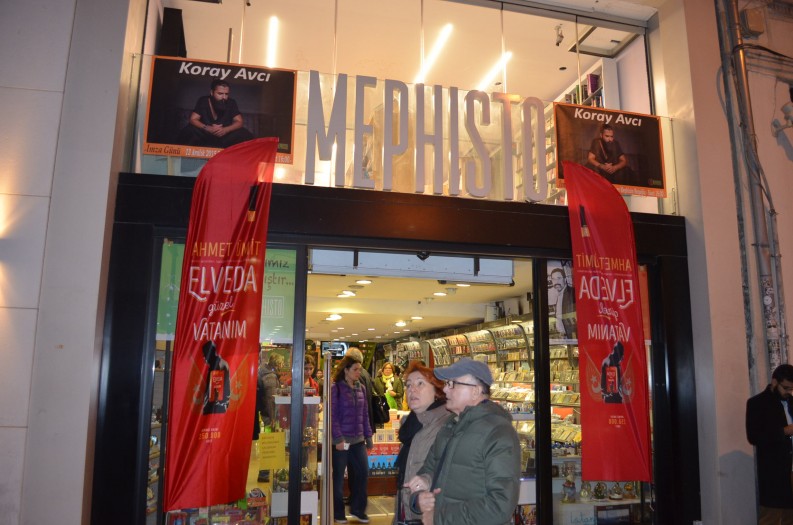 Mephisto Bookstore is on a very busy pedestrian street in Istanbul.

Istanbul’s Mephisto Bookstore bustles with business and proves there is hip, happening indie bookselling all over the world.

Bricks-and-mortar booksellers in Istanbul do not have Amazon to contend with as yet, but it seems they are already offering something that online retailers cannot replicate. Mephisto is a cool, upmarket indie on Istanbul’s ridiculously crowded Istikal street (Doesn’t anyone work? Doesn’t anyone go home?) that offers an attractive mix of curated books, related non-book product like CDs and DVDs, cafés, and a sense of surprise and atmosphere that Amazon would find very hard to compete with, if it ever does arrive.

Opened in 1997 and one of the biggest bookstores in the city, Mephisto is a general bookstore that also sells plenty of other product, from toys to stationery to vinyl albums. Indeed, it was interesting to see young customers ignoring the small display of the Callibro e-reader — of which more anon — and browsing the racks of Pink Floyd albums instead, while watched over by jazz icons on the wall like Wes Montgomery. One section of the ground-floor boasts what director Aytekin Sahin calls “long sellers,” those titles “that you are happy to always have with you.” It was a fascinating and eclectic range that included Lao Tzu, Descartes, Stefan Zweig, Sylvia Plath, Murakami, Hemingway, Hesse, Charles Bukowski, Antonin Artaud and Ray Bradbury.

The store is spread across nine floors, around four of which saw a long, snaking queue for Ahmet Umit, who was signing copies of his new novel Farewell My Beautiful Motherland, at his launch earlier this month. Among customers was the former Minister of Culture. The main fiction floor at Mephisto.

Turkey does not have fixed prices but it seems that if you mention this topic — and RPM (retail price maintenance) and discounting — to booksellers you receive a blank look. It doesn’t appear to have ever been the issue it has been in other parts or the world. Suffice to say, discounting is allowed, but only happens in a small way at Mephisto. Its three stores — it has two others in the city — have a membership card which offers 10% discount for cash, 5% for credit card and 5% for local students.

So to that e-reader. Mephisto is selling the Calibro e-reader that links to Turkish online seller babil.com. It is a similar arrangement to the one Waterstones had with Amazon in the UK — and, according to Sahin, similar in another way too, because, with a smile, he admitted: “We don’t sell very many.” Waterstones MD James Daunt would smile at this too, and nod in recognition because in the UK, Waterstones has just abandoned its Kindle departments.

Literary agent Nermin Mollaoglu, who was acting as interpreter, doesn’t think Amazon will come, or will find it very hard if they do. She believes at present “ebooks are less than 1% of the market”. But she added that outside the big cities, bookshop numbers had fallen, largely due to the well-meaning government policy of offering textbooks for free for schools to give students. “Suddenly, the bookshops lost those customers. It would have been good if they had allowed the bookshops to distribute the textbooks.”

Despite the lackluster sales of its e-reader, Sahin still feels that digital is the future and that “you cannot swim against the tide”. Yet he runs a bookshop that is doing all the things necessary to combat the onslaught! It was interesting that in an hour in the shop, which was very crowded, the e-reader stand remained largely ignored, lacking the colorful impact of the displays of books. Perhaps, like in the US and UK, people prefer their mobiles and tablets now.

Sahin has worked at the store for six years, after studying Librarianship at Istanbul University. He likes to read politics and sociology, which caused some gentle mockery from Mollaoglu, so he threw in Orhan Pamuk and the poet and writer Ahmet Tanpinar, too.

Talking of poetry, it is striking the reverence in which that literary form is held in Turkey. The poetry section in Mephisto included almost a whole shelf devoted to the work of the Turkish poet Nazim Hikmet. Mollaoglu observed: “In Turkey, all good students would buy their girlfriends poetry,” she said. “Isn’t that right?” she added, looking at Sahin and laughing. He grinned broadly.