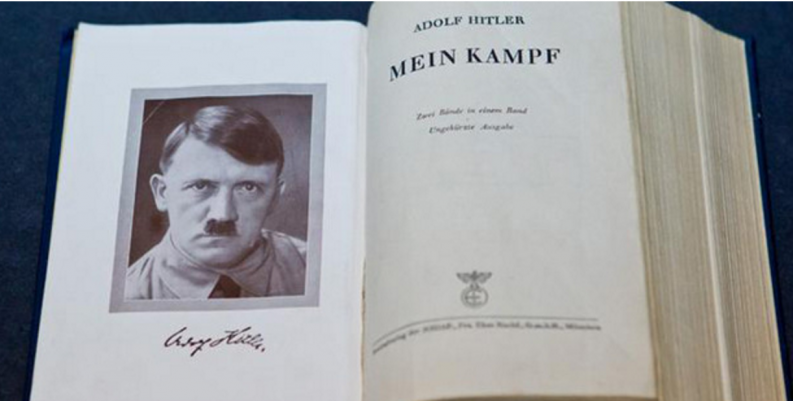 For the first time since the end of the World War II, Adolph Hitler’s Mein Kampf will be available in bookstores in Germany.

Rt.com reports that for the first time since the end of the World War II, Adolph Hitler’s Mein Kampf will be available in bookstores in Germany.

The book, formally titled Hitler, Mein Kampf: A Critical Edition, will be published by the Munich-based Institute for Contemporary History (IFZ) with a limited print run of between 3,500 and 4,000 copies. The new edition includes, along with Hitler’s original text, close to 3,500 annotations, written to “denounce Hitler’s “propaganda and lies.”

The director of the Institute for Contemporary History, Andrea Wirsching, said that the book will go on sales in bookstores between January 8 and 11, at a price of 59 Euros per copy. The edition will not be available online.

In a statement, the IFZ declared that the publication of the new edition is being handled “responsibly.”

“Making annotations to Mein Kampf is not only a scientific task.There is no single book surrounded by so many myths and received with so much disgust and fear. [The book] attracts [people] due to curiosity and speculation, accompanied by an aura of secrecy and prohibition, a taboo that serves itself. The only purpose behind republishing the Mein Kampf is to end the “distribution of Hitler’s propaganda, his lies, half-truths and hate rants,” the statement says.

Wirsching, who has chaired the project since 2009, told RT that the new edition is meant to serve as a scholarly alternative to some “irresponsible” and uncritical versions available around the world.

Magnus Brechtken, the deputy director of the IFZ, said that the new two-volume edition will include comments by both historians and academics that will undermine the “absurdity of Hitler’s statements and politics.”

RT cited The Daily Express, which quoted him as saying that while “some would immediately feel uncomfortable when a book that played such a dramatic role is made available again to the public, he insisted that,“what we are publishing here is in fact an anti-Hitler text.”

Even so, there are some in Germany who believe that the book should not be allowed back on book store shelves. “This book is too dangerous for the general public,” Florian Sepp, a historian at the Bavarian State Library, which keeps original copies of “Mein Kampf,” told the Daily Express.

German Justice Minister Maas was quoted at ynetnews.com as saying that judicial authorities in his country would act to prevent the use of a reprinted version of Adolph Hitler’s book “Mein Kampf,” for incitement. “Banning the publication is no simple task. With that said, we must make a clear distinction between the issues of publication rights and incitement. The Judicial authorities will fight against any cases of incitement.”

A recent poll by YouGov seemed to indicate that two out of five Germans were concerned that the new release of Mein Kampf “could facilitate that rise of the far-right in the country.”