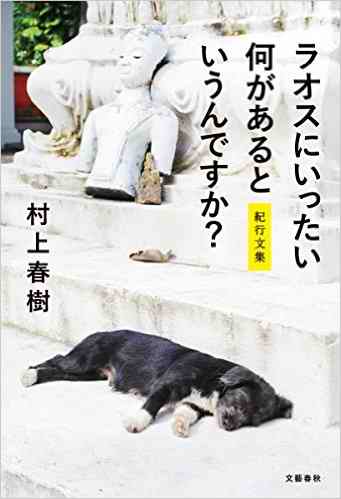 Haruki Murakami made a rare, surprise appearance at a Fukushima literary event, where he compared the loneliness of writing with frying oysters. Haruki Murakami’s latest novel is What on Earth is There in Laos?

The word “Fukushima” has been associated with mostly bad news since the big earthquake four years ago, so when the native Fukushima writer Hideo Furukawa organized a literary event there, he asked his friends to join in the merriment. Then the usually reclusive Haruki Murakami popped in at a panel on Nov. 29, he started off his discussion about … frying oysters.

First reminding the audience that his wife does not like fried food in general so he makes his po’ boys by himself, Murakami said, “Frying oysters is fun, but a solitary experience. Just like the relationship between loneliness and freedom, searching for what’s inside you, word by word, is a solitary activity. Writing a novel is like frying oysters. You do it because you like doing it. Next time you hit a writer’s block, remember, it gets hard if you think to yourself you’re writing a novel, but gets easy if I think of it as frying oysters.”

Murakami’s latest book is a travelogue titled, What on Earth is There in Laos? that went on sale November 21st.