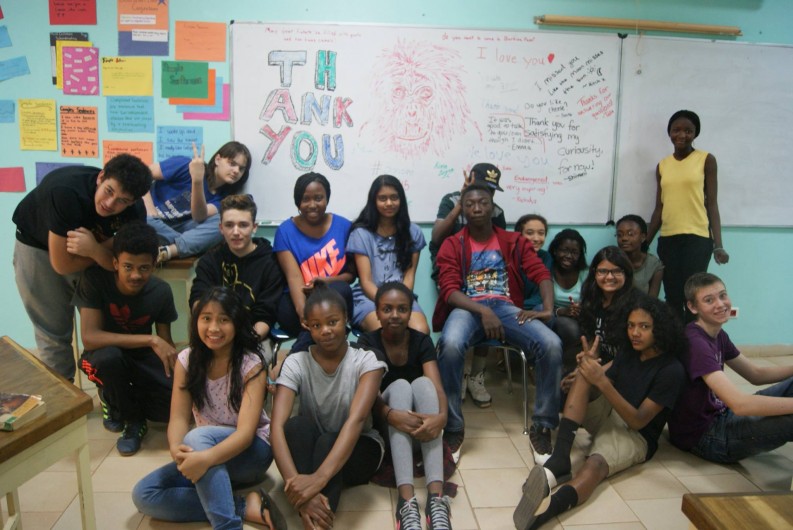 YA novelist Eliot Schrefer, who writes about Africa, and Eric Spreng, a teacher in Burkina Faso, discuss the impact of fiction on young African adult readers’ lives.

Eliot Schrefer is a New York Times best-selling author whose widely acclaimed YA novels, Threatened and Endangered (both finalists for the National Book Award), have helped introduce a generation of readers to life in modern Africa and the ties that bind humanity to our primate relations.

Eric Spreng teaches English at the International School of Ouagadougou, in Burkina Faso. He writes about teaching, traveling, and books here and on Medium.

This is a conversation between the two.

Eric: How does this audience (African students at an international school in Ouagadougou) differ from the audience you imagine while writing a work like Endangered? (To what extent are these differences reflected in students’ personal responses to the novel?)”

Eliot: “One response I’m used to when I do school visits in the states is to hear someone say “you got Congo right—I really felt like I was there.” Those comments are generally from people who have never been to DRC, interestingly enough. What I really take them to mean is that my book contributed to the imagined space that reader had created around the concept of “Congo.” It makes me nervous to hear it. All the same, I don’t think it has to mean that Endangered contributed to cliché, though I’m sure it has done just that in hundreds of ways that are below the level of my conscious (and which your students’ incisive blog entries helped tune me to—more on that in a moment). Verisimilitude can also come from a level of surprising detail, too. It’s possible that folks in the US feeling the book really captured Congo is about artistic effect… but I have no doubt it’s also as much to do with troubles with the Adichie “One Story” effect, as one of your students wisely pointed out.

“To more directly answer your question, though: Your students’ responses are far more informed of the problems inherent in Western depictions of an African country than those from a typical class I might chat with in the US. I was imagining the kind of responses you collected here while I was writing Endangered—getting raked over the coals was part of why I was nervous to write the novel, why I almost didn’t start in the first place. I’ve been lulled by the cottony, supportive interpretations of fellow Americans. As I was reading the moments your students identified as contributing to Western stereotypes of Africa, I was nodding my head yes, even as I felt challenged, anxious, and relieved to finally get to the moments where they were instead feeling identification with Sophie.” Eric: Probably more of the latter. We explore the novel in terms of identity and perspective. The reason that I wanted to teach Endangered when I read it is that Sophie is such a compelling character who must negotiate two seemingly disparate identities. This is something that many students in international schools experience, obviously.

Identity intersects with perspective when we begin to consider Africa in the western imagination. My students read an essay from Chinua Achebe, which begins with an extended geographical analogy to highlight what he calls the “paradox of proximity”– the fact that London and Accra share the same longitude and time zone. He writes:

…longitude is only half the story. There is also latitude, and latitude gives London and Accra very different experiences of midday temperature, for example, and perhaps gave their inhabitants over past eons of time radically different complexions. So differences there are, if those are what one is looking for. But there is no way in which such differences that do exist could satisfactorily explain the profound perception of alienness which Africa has come to represent for Europe. (“Africa’s Tarnished Name” in The Education of a British-Protected Child, p. 77.)

My students in Ouagadougou come from Burkina Faso, Ivory Coast, Mali, Niger, Rwanda, South Africa, Europe, Asia, and the States. I don’t think any of them had actually been to DRC, or even Nigeria, which is a bit closer to home for us in Burkina Faso. Certainly their knowledge of those places is limited. (There was one student who became quite interested in the DRC while we were reading Endangered, and started doing his own research outside of class and sharing his discoveries in class discussions.) Sophie experiences the distorted perceptions of a place she is connected to, and loves, and my students, both those from African countries and those whose lives have brought them to African countries, are able to relate to that.” Eric: Is there anything that you found surprising in students’ responses to the novel?”

Eliot: There’s an undercurrent to these responses of “here are things the author got wrong, but I’m glad the book exists.” Especially in teen readers, that’s a really strikingly level of maturity. They’re saying “I have a beef here, but am still grateful for this flawed thing. I’m glad to see someone like me in contemporary YA, even if there are aspects of the interpretation that irked me.” I’m touched by the generosity of that impulse, and I’ve learned from what they said.

Eric: As a writer, did you let yourself think much about how your portrayal of Africa / Africans would fit in with (conform to / diverge from) the history of representations of Africans by Europeans / white people?

Eliot: Definitely. While I was researching before I wrote Endangered or Threatened, I read a lot of what I came to think of as “Africa Cowboy Lit.” There’s a large number of contemporary quest memoirs out there, generally by white American/British/Australian middle-aged men who went through a divorce/death-of-a-child/illness in the civilized global north and went to Congo/Nigeria/Kenya to prove they could face survival in the face by piloting-a-canoe/bushwacking/following-lions, and returned home the triumphant conqueror of the self.

It’s not a new story, of course: Africa as a playground for the internal lives of Westerners. I was scared of contributing to that trend. I was also scared of presenting Africa as one monolithic place, a zone of uniformly impoverished people who should get 1% of your GAP purchase prices as long as they aren’t killing baby elephants. I made Sophie (the main character of Endangered) half-American, half-Congolese partially as a hedge against the biases I wouldn’t be self-aware enough of to correct for. She spends her school years in the States, even though her mother is Congolese, so her viewpoint oscillates from insider to outsider and back. I deliberately had her start out with some stereotypical views. But there are also other moments that your students point out as stereotypical (the warm mother with the rolling laugh, e.g.) that I, the author, was contributing to without being conscious of it.”

Eliot: I’m curious, from your experience teaching at international schools in Burkina Faso and now Uganda, what have you come to see as the sum effect of contemporary children’s/YA lit about Africa? More harm than good? More good than harm? Something else entirely?

Eric: It’s gotta be for the better. Adichie describes a reality in which all of the stories she loved as a young person in Nigeria featured blue-eyed white people, apples, and snow. That my students in Africa today can experience a broader range of stories and experiences is certainly good. As a teacher, one of my main goals is to engender lifelong learning in my students. Reading is a rabbit trail that begins wherever it happens to begin– and it is more likely to begin if a student can relate to a character. There is an axiom in social justice teaching that the curriculum should be both a mirror that reflects who we are and a window that gives us a glimpse into worlds we otherwise wouldn’t know.

Eric: When you chat with students at schools in the US, have you found that your work has created more interest in Africa for these students? (Do your readers very often move from your work to other works about Africa or by Africans?)

Eliot: To be honest, I’m afraid that the answer to this question is probably “not much.” When I visit or Skype schools, it’s generally because the class is reading contemporary YA lit—and there’s just not a lot of that set in Africa. At all. I’m sitting on an award jury this year, for example, and of the nearly 300 titles we received, very few were set in Africa—few indeed were set anywhere other than the United States or Canada.

Eliot: I’d be really curious for your thoughts on this one, Eric. Where would you send students who wanted to know what to read after/alongside/instead of Endangered?

Eric: As you’ve pointed out, there is not as much to choose from as we would like. Teri Lesesne’s work Reading Ladders (influential among English teachers and librarians alike) aims to help point kids in the right direction once they complete, and love, a book.

I have pointed kids toward Nnedi Okorafor’s work. The protagonist of her YA fantasy novel Akata Witch is American-born, phenotypically-African albino and living in Nigeria. The graphic novel, Deogratias, set during the Rwandan genocide deals with the complexities and contradictions of what is left unsaid. Marguerite Abouet’s Aya, Life in Yop City, also a YA graphic novel, is a fun coming-of-age tale that explores love and sexuality, and reads like a love letter to Abidjan, where it is set. I taught Aya alongside Romeo and Juliet last year and my students loved it.

“There is so much great stuff coming out these days as well. Adichie’s Americanah has gone viral with my high schoolers. (It didn’t hurt that Beyonce sampled her TED Talk!) Helen Oyeyemi’s The Icarus Girl, Okey Ndibe’s Foreign Gods, Inc., Taiye Selasi’s Ghana Must Go and Teju Cole’s Open City. Chigozie Obioma’s The Fishermen, which was shortlisted for the Man Booker this year is very good. Diriye Osman’s short story collection, Fairytales for Lost Children, whose protagonists deal with questions of gender identity, sexuality, and LGBT issues in Somalia and London, is tremendous– and has created some of the most authentic and challenging conversations I have seen among grade 11-12 students. I’d also include Child of Dandelions by Shenaaz Nanji, which takes place at the moment Idi Amin expels everyone of Indian descent from Uganda, after God tells him to do so in a dream.”