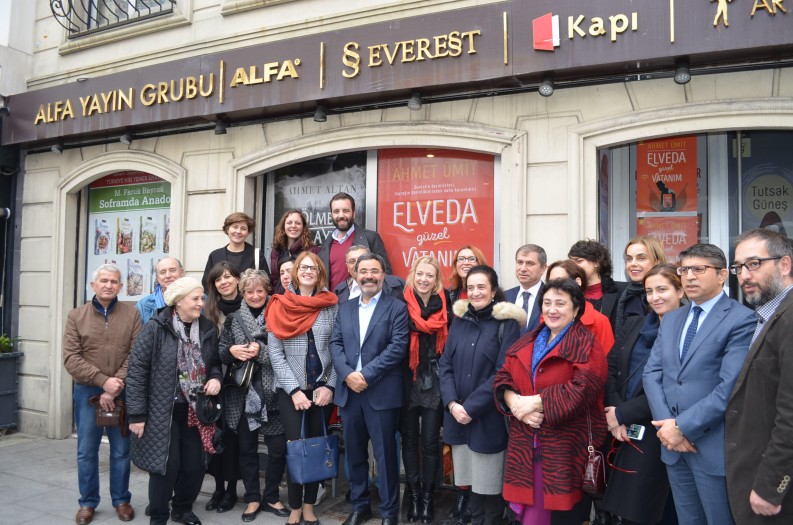 Ahmet Umit, centre, with his foreign publishers and translators outside the offices of his Turkish publisher, Everest.

Istanbul’s Kalem literary agency hosted a three-day celebration of Turkish novelist Ahmet Umit’s new novel Farewell My Beautiful Motherland this past week, flying in many of his European publishers and translators, putting them up in the sumptuous (and highly literary) Pera Palace Hotel, where guests from the heyday of the Orient Express used to stay, and holding a press conference for a writer whose sales figures across the country – and translation deals – keep rising.

“We wanted to do something special for Ahmet,” said Kalem’s co-founder, the indefatigable Nermin Mollaoglu, who hatched the idea for the grand event and worked on the details with both the author and his Turkish publisher Everest. “It is wonderful to bring together all the people who publish and translate Ahmet. Our print-run for the new novel is 250,000 which we think is a record. I am so happy to have everyone here all together talking about Ahmet and about Turkish writers.” The launch boasted these branded glasses

Umit himself helped fund the extravaganza too, and there were numerous lovely touches, from the chocolate cake bearing the jacket of the book which awaited guests when they arrived in their glorious hotel rooms, to the shorts glasses that also bore the cover of the book at the evening dinner.

The Pera Palace is certainly not short on literary connections. Hemingway and Ian Fleming stayed here, and Agatha Christie has her own plaque outside room 411 where she apparently wrote some of Murder on the Orient Express.

Among the foreign translators present was Russia’s Evgeniya Larionova who translated Umit’s children’s book Fairytales within Fairytales, just published by Nigma in Russia and the author’s first title in that part of the world. “I hope that the name of Ahmet Umit will now become well-known in Russia,” she said, “despite the problems between our two countries.” This was a reference to continuing tensions between Turkey and Russia, following Turkey’s shooting down of two Russian warplanes which it claimed were in its airspace. She added that her flight to Istanbul was half-empty and assumed that many people had cancelled their trips on the advice of the government. However, she said she’d had no problem getting her visa. There were foreign publishers and translators from a wide range of countries including Armenia, Azerbaijan, Bulgaria, France, Georgia, Germany, Greece, Lebanon and Macedonia. Among them was Ursula Bergenthal, Editor-in-Chief of Random House Germany’s btb imprint which will publish Umit’s Momento for Istanbul next year, and Aneta Matovska from Macedonia, who has translated the new novel and said it had a personal resonance for her. “Part of the book takes place in my hometown, which is also where Kemal Atatürk [the founder of the Republic of Turkey who died in 1938] attended military high school.”

Out in the city, Umit’s new novel was hard to ignore, with many of Istanbul’s faded buildings and graffiti-covered walls boasting the bright red posters of the book’s jacket, part of a nationwide campaign. A slick promotional video is also clicking up the hits on social media. Everest publishers has a big campaign for Umit’s novel

Farewell My Motherland is a drama about a young man who wants to live the life of a writer in Paris with his lover, Esther, but becomes caught up in the turbulence of the pre-First World War years in eastern Europe, a time when Greeks were declaring their freedom, Jews were forced to leave Thessaloniki, Bulgarians were fighting for independence and Ottomans were seeking to found a new country. It raises questions about identity and asks: ‘Is the state sacred, or is it the human being?’

Questions of identity are nothing new to ‘Istanbullus’ (Orhan Pamuk’s term for those from the city), of course. With its famous split between its European side and its Asian side, its successive layers of history and its glorious collision of cultures Istanbul is perhaps the perfect inspiration for a writer. Certainly, the importance of cities is noted by the hero of Farewell My Beautiful Motherland. “Death begins with the loss of one’s city,” he observes, “and is completed with the loss of the homeland.” Scout Carmen Pinilla from Berlin, left, with Anna Pataki from Greek publisher Patakis, in front of the famous Hagia Sophia

What does Istanbul mean to Umit? “Istanbul is a female city,” he said. “It is a woman that never gets old or ugly, a woman that you can never stop loving – and that is not always a good thing. Istanbul is not always honorable too. She is always ready to cheat, but still you cannot give her up. She is always full of surprises. She can break your heart, but in a sudden she will give a smile and you will forgive her everything. This is my beautiful city.”

He believes cities like Istanbul “can be more important than real characters in novels” and when asked what the city in which he still makes his home can teach the world, he replies: “It is how to live in peace. We have 8,000 years of history in Istanbul – Greek, Roman, Ottoman … Istanbul is about the necessity of being multi-cultural. We have the struggle of religion and culture, of course, but for thousands of years we have lived together in peace. That is what Istanbul can teach the world.” The Pera Palace Hotel, where Hemingway and Agatha Christie stayed.

What is it like to be a writer in Turkey just now? “Unfortunately it is not good. The title of my book is a reference to this. Unfortunately, we are getting far away from democracy every day. Two important journalists were arrested this month, and we have civil unrest in the south east of the country. It is hard to feel happy in this climate. I worked for years on this novel, but I didn’t feel happy when I finished it because of the current political climate.”

Nonetheless, he admitted that it was good that he could say as much and that he was happy to be quoted. Then he was whisked away to a signing session in the city to meet the first buyers of that record-breaking print-run.