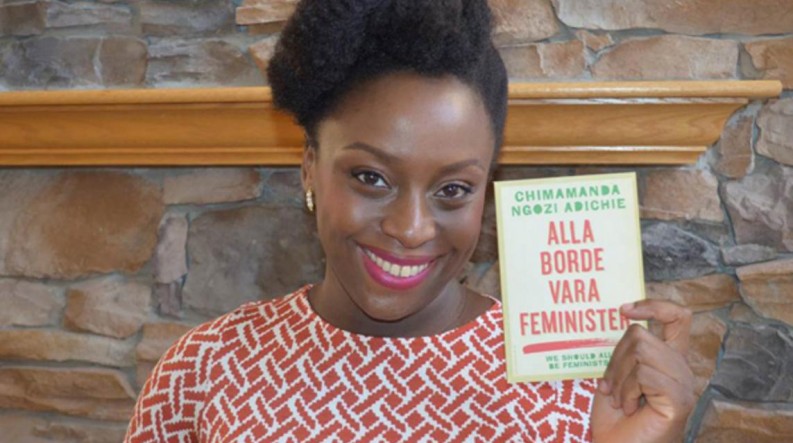 A copy of Chimamanda Ngozi Adichie’s We Should All Be Feminists will be given out for free to every 16-year-old in Sweden.

It started life as a widely acclaimed TED talk. It was quickly developed into a published essay. And now acclaimed author Chimamanda Ngozi Adichie’s We Should All Be Feminists will be given out for free to every 16-year-old in Sweden by the Swedish Women’s Lobby and publisher Albert Bonniers, in the hope that it will “work as a stepping stone for a discussion about gender equality and feminism.” As Madeline Davis reported for Jezebel, the groups behind the project, with the support of the UN Association of Sweden, the Swedish Trade Union Confederation, the Order of the Teaspoon, Unizon and Getrud Åström, “hope that teachers will integrate We Should All Be Feminists into their teaching” and will distribute guidelines for classroom discussions.”

In her essay, cited in The Guardian, Adiche writes:

“My own definition of a feminist is a man or a woman who says, ‘Yes, there’s a problem with gender as it is today and we must fix it, we must do better,’” she writes, “All of us, women and men, must do better.”

“Some people ask: ‘Why the word feminist? Why not just say you are a believer in human rights, or something like that?’ Because that would be dishonest,” Adichie continues. “Feminism is, of course, part of human rights in general — but to choose to use the vague expression human rights is to deny the specific and particular problem of gender. It would be a way of pretending that it was not women who have, for centuries, been excluded.”

And in a video message played for students at the project’s launch in Stockholm, she said:

Adiche continued: “When I was 16, I don’t think I knew what the word ‘feminist’ meant. I don’t think I knew the word at all. But I was a feminist. And I hope that the 16-year-olds that will read this book in Sweden will also decide that they’re feminists. Mostly, I hope very soon that one day we will not need to be feminists. Because we will live in a world that is truly just and equal.”

Clara Berglund of the Swedish Women’s Lobby said that, “This is the book that I wish all of my male classmates would have read when I was 16. It feels so important to contribute to this project. It is a gift to all second-grade high-school students, but it is also a gift to ourselves and future generations.”

Publisher Johanna Haegerström was quoted in The Guardian as saying: “Our hope is that the Chimamanda Ngozi Adichie text will open up a conversation about gender and gender roles, starting from young people’s own experiences.”

The first copies of We Should All Be Feminists were handed out last week at Norra Real High School in Stockholm.