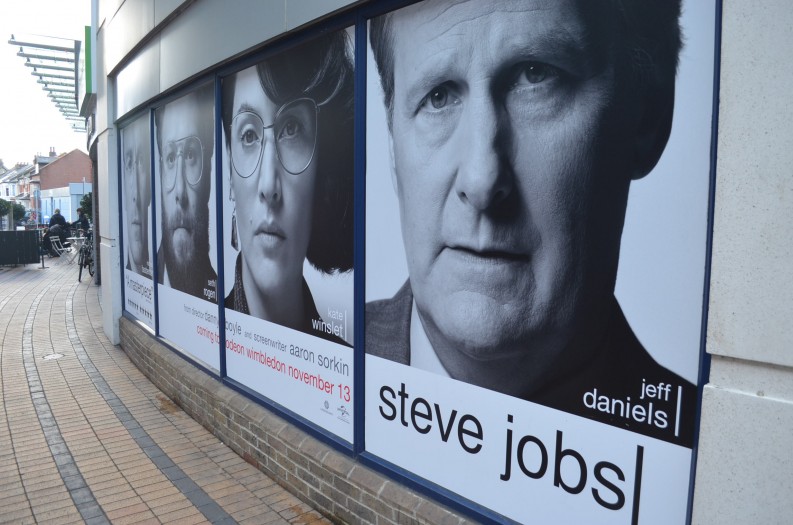 The Steve Jobs biopic based on Walter Isaacson’s book depicts Apple as paranoid and closed — and quite the opposite of the publishing business.

The cult of Apple is caught well in the Steve Jobs biopic, which is based on  Walter Isaacson’s best-selling biography. All those product launches in places like San Francisco’s Symphony Hall; all those upturned adoring faces in the crowd; all that adulation. This is almost Tom Cruise addressing that well-known church.

These scenes have a flavor of Orwell’s 1984 about them — an irony because ‘1984’ was the name of the Ridley Scott-directed commercial used by Apple to introduce the Apple Macintosh computer at the end of 1983.

In the commercial, glimpsed in the movie, Apple is seen as ‘rescuing’ humanity from conformity — the unintentional irony being that, 30 years on, it can seem like we are fast-moving towards a kind of Apple conformity today, one in which it is the Samsung and the Android folk who are the rescuers, with Microsoft bravely chipping in from the wings.

If Orwell’s world was all about control and Big Brother, then Jobs rather fits this well. In one scene he talks about developing a “closed system, end to end control, complete incompatibility with anything.” In today’s world of interoperability versus ‘walled gardens’ these quotes have an added resonance.

Apple can seem a somewhat closed, “walled garden” company itself. If the book industry is like a giant family, then Apple is the cousin who is brilliant but distinctly unsociable. If you do manage to collar him/her at a party, they are rather paranoid. “You won’t quote me, will you?” But this could be just the familiar gripe of journalists. There’s not necessarily any reason Apple should be open — it’s just that, hell, most of the worldwide book industry is. Even Amazon’s Senior VP Russ Grandinetti speaks at conferences.

If you like arguments, then the movie comes highly recommended. Not just arguments really, full on rows. They never stop. Jobs with his ex-wife; Jobs with Apple co-founder Steve Wozniak; Jobs with former Apple CEO John Sculley; Jobs with Judge Denise Cote of the United States District Court of the Southern District of — well, all right, that last one is made up. The film stops at 1998 before we get to any of the price-fixing/collusion allegations, which is a shame really — all those accounts of publishers meeting in upscale Manhattan restaurants would make great drama.

Watching these rows play out, often accompanied by repetitive, Philip Glass-like see-sawing violins to ratchet up the tension, one is struck by the huge contrast between what people like about Apple products — clean lines, calmness, ease of use — and the messy, uncomfortable scenes being shouted out in front of you. If you opened up the MacBook box and it behaved like this, you’d take it back.

Sadly, for book-spotters, the film is a disappointment. There are no glimpses of any. However, it does open with an author and an extraordinary clip. It’s Arthur C. Clarke, predicting with uncanny accuracy back in 1974, on the Australian science program Perspective, the connected world we live in today. Referring to the interviewer’s young son who is staring up at him (how many in the audience thought this was the young Jobs, one wonders) he says that by 2001 (yes, really), every home will have a computer that is connected to the world and will provide “all the information he needs for his everyday life: his bank statements, his theatre reservations, all the information you need over the course of living in a complex modern society.” Computers will enrich our society, Clarke continues, and will let us conduct business from wherever we like, “allowing us to live away from major cities.” Respect to Mr. Clarke for his foresight.

So we’ve had a Facebook movie (The Social Network), a Google one (The Internship) and now an Apple one. We just need an Amazon one (Steve Carrell to play Bezos?) and a Bill Gates one and then they can all be sold as a Tech Movie Box-Set.

The Microsoft movie could be good, what with Gates’ famous antitrust court case over Microsoft’s business practices in the late Nineties, followed by his redemption, if you like, with the charitable work of the Bill and Melinda Gates Foundation. The only problem will be that every few minutes the movie will have to close down to install updates.