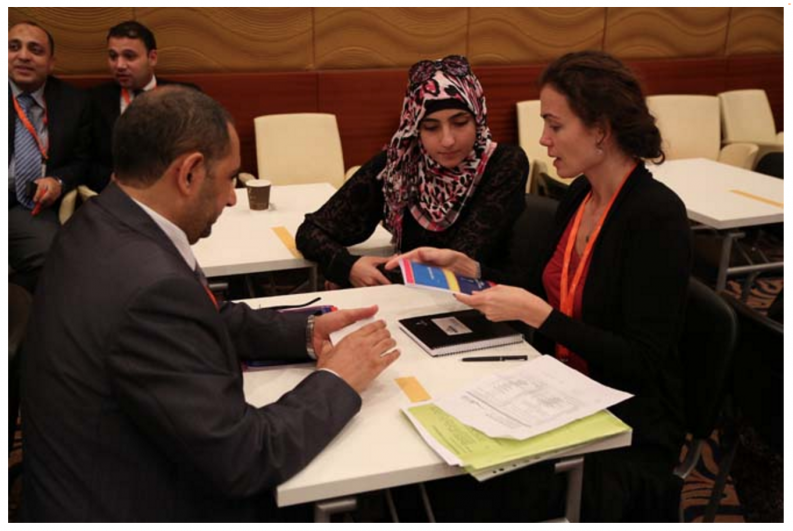 The Sharjah Book Authority is offering a 2 million UED ($563,000) prize for a book translated from Arabic, an new incentive for the 200 international delegates at this year’s Sharjah International Book Fair.

The 34th Sharjah International Book Fair opened in customary style yesterday (Wednesday) morning, with a glitzy, multimedia show at which a new, 2 million UED ($563,000) award for translation was announced and the emirate’s Ruler, His Highness Dr Sheikh Sultan Bin Mohammed al Qasimi, called on all Arab leaders “to put out the fire of sedition and raise the flag of knowledge.”

In his opening address, His Highness touched on one of his favorite themes — the book as “the light dispelling ignorance, leading us to faith and certainty.” As in previous years, he also referenced issues affecting the wider Arab world, or “this blighted Arab world,” as he put it. “We must expel the Devil from the world of the Holy Qu’ran,” he said, in a clear reference to Daesh (which spells out the acronym of ISIS’s full Arabic name, al-Dawla al-Islamiya fi al-Iraq wa al-Sham). “To that end I invite all Arab intellectuals to attend a conference — the Arab Cultural Democratic Conference — where people from different backgrounds, from the right and the left, can meet and talk, and where we will draw up a charter that we will all sign. We will meet as makers of culture during this dangerous time.” In a week that has seen much discussion of the freedom to publish, he noted the importance of forums like the Arab Publishers Conference, which preceded the fair, and the SIBF itself, and referred to discussions with his daughter, Sheikha Bodour, on some “obstacles and hurdles that some publishers who wished to come to the fair” had faced. With a nod to Lord of the Rings perhaps, he said that he had put his daughter’s mind at rest by exclaiming “Let them pass! Let them pass!” Sheikha Bodour’s face had “lit up with joy” at this, he said.

However, it was unclear as to what obstacles he was referring to. He went on to note that some publishers had acceded to the International Publishers Association and that the Arab Publishers Conference was “entering the field of global activity.”

In remarks that demonstrate the tricky line between criticism and hate speech, he observed that countries have “their own policies and faith which may collide with one another. But I reached a conclusion with Sheikha Bodour. I knew that many countries wished to take part in this international event and I guaranteed them no hurdles. The book is the light against ignorance, but there is some writing that does not rise to this level. The Sharjah Book Authority can correct some of these mistakes. At the Sharjah International Book Fair almost all books are allowed. But to attack a person, or God, or the principles of any religion — we do not accept this. I don’t think we should mix culture with political ideologies.”

The Crown Prince of Saudi Arabia, Khalid al-Faisal Al Saud was guest of honor this year, and Ingram Chairman John Ingram from the US and Bloomsbury Executive Director Richard Charkin from the UK were among those who joined dignitaries from across the Gulf states on the long — very long in Sharjah — top table.

The Sharjah Award for Translation is sponsored by Air Arabia and will be run by the new Sharjah Book Authority which is also the body behind ambitious plans to create a ‘publishing hub’ and free zone in the emirate. The award will be given to a title translated from Arabic into any other language, though it is unclear as yet as to how the money will be split between author and translator.

There are some 1,547 publishers from 69 countries at this year’s fair, which runs until November 14. Two hundred international delegates were flown in for the professional program and match-making sessions with Arab publishers, including representatives from UK agencies Andrew Nurnberg, Ed Victor and the Loralla Belli Literary Agency; US publishers Simon & Schuster, Michigan State University and Poisoned Pen Press; as well as Nigerian publisher Cassava Repulic and Bulgarian house Prozoretz. The SIBF gets more international every year.

Among the first-timers was Gvantsa Jobava from Intelekti Publishing in Tbilisi, the capital of Georgia. She is Chair of the Georgia Publishers Association and explained: “Georgia is country of honor at Frankfurt in 2018 so we are coming to as many fairs as possible. We are looking to translate Arab authors into Georgian — the Arab market is so huge, it is important for us to meet with them.”

Authors here this year include novelist Ben Okri, who was interviewed on stage by Jacks Thomas, Director of the London Book Fair, and John McCarthy, who was held hostage in Lebanon from 1986 to 1991.