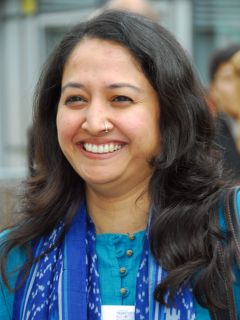 Vinutha Mallya surveys the evolving rights and licensing scene in India, especially for sub-markets in Tamil, Bangla, Malayalam and other languages. Although India is dubbed to be a fast-growing, “emerging” market for books, it is also a very complicated one.

India has the unique distinction of being one of the largest markets for books in the English language while being a country where publishing of books is officially supported in 23 other languages. Not to forget hundreds of mother-tongues, many in which books are also published. Hindi is the official language, and English is the other official administrative language.

It is estimated that among trade books published in the 24 languages, those in English make up 24% of all books published in India. Hindi (with its many dialects) produces about 26%. The rest of the pie is split into books in other languages, including Tamil, Bangla, Telugu, and Marathi, all ranked, with Hindi, among the 20 most spoken languages in the world. Both Bangla as well as Malayalam have a long history of publishing translated works. Readers in these languages have, for long, had access via translation, to books by writers from Europe and Latin America. Hindi, Marathi and Tamil readers too are reading far more writers in translation than ever before.

This complex schematic of a multilingual country poses both opportunities and challenges for publishers within and outside India.

The Conundrum for Indian Languages

Opportunities exist because the Indian sub-continent is not one market but a cluster of many markets.

“When foreign publishers sell India territory rights (in the case of an English title), to an Indian-English publisher or the subsidiary of a multinational brand, these publishers retain the rights for the other Indian-languages too,” says the Kerala-based editorial and rights consultant, VC Thomas, who specializes in acquiring rights for Malayalam publishers.

When Hachette Book Group’s I Am Malala was the big draw at Frankfurt Book Fair, in 2013, Thomas was keen to acquire rights for a Malayalam edition. But he was told that Hachette India had asked the U.S. counterpart to seal the rights until three months after the release of Hachette India’s English edition. Publishers from other Indian languages were also interested and had been trying, so he brought together a consortium of publishers from four Indian languages. “We thought a ‘substantial’ offer might be attractive to the rights department in Little, Brown and Company. And I felt that they were not clear about our Indian market as well,” he says. They managed to pitch and acquire the rights as a group. There are no agents to facilitate the complex sub-division of rights to other languages. Apart from a couple of exceptions (especially HarperCollins India, according to Thomas), Indian-English publishers including subsidiaries of international trade publishers don’t have departments or experienced staff to handle the sub-territory rights. In general, very few literary agents exist in the country, and nearly all of them service Indian writers writing in English. A few publishers have successfully acquired rights directly from publishing houses abroad. Publishers like Vani Prakashan and Yatra Books (Hindi), Kalachuvadu Pathippagam (Tamil), Deecee Books (Malayalam), Mehta Publications (Marathi) have been investing in publishing translations from European languages and international bestsellers in English.

But India is a price-sensitive market, which, combined with a small print run for translated books, does not translate into much money that can be offered. According to Kannan Sundaram, publisher of Kalachuvadu, “publishers of European languages are happy when a Tamil publisher like me contacts them. Perhaps because they give more importance to cultural diversity, they don’t look at the monetary aspect too much. This is not true of American publishers, who upon seeing the money offered, seem to consider it not even worth their time to email back a response rejecting the offer.” On an average, Sundaram produces 1,000 copies of a translation. Online stores have helped widen the reach for Indian-language books.

Ideally, the rights for India subcontinent (or South Asia) should be assigned along the lines of languages, without necessarily leaving it to the English-language publishers or subsidiaries. “Hindi, Bengali, Malayalam, Marathi, Tamil and even Gujarati markets have evolved as independent territories for successful international titles now,” says Thomas.

Indian-languages publishers have only recently started to plug into global publishing protocols, especially in rights-related matters, and they are gaining a better understanding of licensing and contracts. But much remains to be done to create awareness about copyright and the rights trade, among publishers, translators and authors.

In the Realm of the Commonwealth

The notion of a homogenized India territory in standard contracts of English language publishers is a legacy of the British Commonwealth Market Agreement, which came into force in 1947. British publishers came together to agree that when they sold rights to American publishers they would retain the exclusive right to distribute and sell the book throughout the British Commonwealth, which included India. Although newly independent as a country that year, the majority of publishing industry in India was in English, with the presence of subsidiaries and sales offices of international brands from the UK and US. By 1960s the Indian government adopted a liberal policy for book imports and things began to open up. Growth in literacy, the nationalization of school textbooks and a multi-lingual language policy led to a steady growth in books produced in the languages. The British Commonwealth Market Agreement collapsed in 1976 when it was challenged in the US under anti-trust laws. But the presence of British Commonwealth rights has endured in contracts. Most of the top English publishers in India are subsidiaries of foreign companies. India allows 100% foreign direct investment in publishing. Books are published and distributed through licensing, direct imports, and by local origination. “As English-language publishers in the Indian subcontinent, the Commonwealth territory can be tricky for us,” says Manasi Subramaniam, Commissioning Editor and Rights Manager, HarperCollins India.

“We often find that some incredible books do automatically come to us when HarperCollins UK has the UK and Commonwealth rights. Then again, we also encounter situations where this territory bracket works against us,” she says.

HarperCollins India is addressing this in a few healthy ways, she points out. “For example, Farthest Field by Raghu Karnad, is a book on which we jointly bid with HarperCollins UK. We worked together with colleagues in the UK on this book and we did buy our own rights to it even though the UK rights are within the company.” Another example she cites is of a forthcoming novel by Karan Mahajan, The Association of Small Bombs, which HarperCollins India will publish in the Indian subcontinent, but other publishers will publish in different territories. “In these two cases, we were invited to bid separately. So in sheer terms of business, sometimes it goes our way and sometimes it doesn’t.”

The India growth story is obviously attractive to publishers now, while taking on rights. “So far I have managed to keep India subcontinent rights separate from most sales in the UK and US. I can see it changing of late. India can sell up to 5000 copies of the kind of books likely to sell as foreign rights, so increasingly publishers want India included in their territories,” says the literary agent, Jayapriya Vasudevan, whose Jacaranda Agency represents books from India, Kenya, Singapore, Somalia, The Phillipines, Indonesia and China.

She warns, unless the publisher has a good way to distribute in India, taking on India rights will not work. “We need to examine each sale individually. Though the norm is for publishers to want World English rights, which I was happy to do earlier, I think a rethink is needed, to go back to separate territory rights. Being published locally is the right way to do it. It is better for both the author and the publisher,” says Vasudevan.

“Very often, our authors offer us World rights on books because we are able to sell rights internationally and offer distribution in the US and the UK as well. We find that we are more likely to sell rights to the US than the UK simply because UK publishers, particularly the large ones who have distribution in India, are unlikely to want to offer on a book when Indian subcontinent rights are not available. The result of this is that we end up working with more with independent presses in the UK and large publishers in the US,” adds Subramaniam.

According to Vasudevan, “The complication arises with e-books. Defining territories here is difficult at times.”

India is expected to remain a price-sensitive, print-strong market for the foreseeable future. Publishers, agents and authors looking to do business with India would benefit from keeping some of these facts in mind, about the country’s complex market structure.