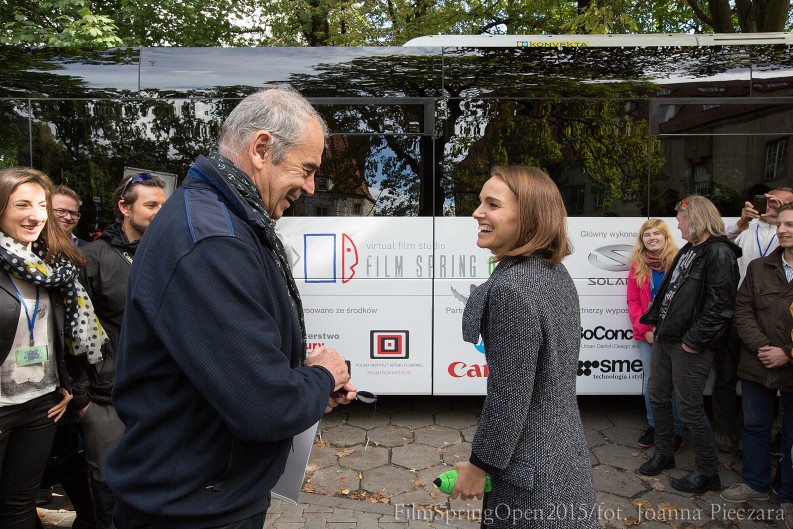 Polish cinematographer Slawomir Idziak hosts and annual film camp for visionaries to experiment with the new equipment shaping the future of storytelling.

Slawomir Idziak has an eye on the future. The Polish cinematographer who shaped the look of Kieślowski’s Three Colours Blue and was nominated for an Oscar for his work on Black Hawk Down has spent the last decade developing an innovative concept that brings together master storytellers with those of tomorrow. Recently he welcomed Natalie Portman to the 10th Film Spring Open Air where she presented her directorial debut “A Tale of Love and Darkness,” on which Idziak worked as director of photography. I caught up with the Polish master following the screening at Krakow’s Jagiellonian University to learn more about his vision for the Film Spring Open Air.

Slawomir Idziak would like to find the perfect English word for his Film Spring Open Air creation, because it isn’t a film festival. The world has enough of those, he says.

Instead, the Film Spring Open Air (FSO), which just finished celebrating its 10th edition, is more closely related to the 19th-century tradition of artists and masters coming together to paint during the day and discuss artistic trends in the evening.

“We use the French expression ‘en plain air’ for this process of traveling somewhere to have a series of workshops and exchange ideas and interdisciplinary approaches,” he explains.

“It’s a hybrid between a symposium, a workshop and many other well known ideas, and has developed over ten years based on the feedback from participants.”

The ten-day event takes place in the picturesque surroundings of the stately Jagiellonian University’s guest house and its associated complex on the outskirts of Krakow.

Participants can attend lectures about the latest trends in audiovisual storytelling in the location’s rooms and lecture theater temporarily converted to showcase Polish cinema from the country’s leading film-makers — both established and those new to the scene.

Around the talks, young professionals and students team up and use over $2 million worth of equipment, including super high-definition and high-speed cameras, new lights and pre-visualization software, to quickly create short films or even interactive stories at the campus and around the city.

This year the FSO also welcomed students and masters from the realm of animation, game design, visual- and special effects to create a truly interdisciplinary event. Oculus Rift was also there, as was the latest 4K TV from Sony alongside demonstrations of motion caption and 3D film creation.

The idea of creating a future-focused ‘film-making brain’s trust’ occurred to Idziak while he was working as a visiting professor to many European film schools.

“I came to the conclusion that film education is behind the development of the techniques and the language used in the industry,” Idziak says.

“So I decided to find a way to create something like a mixed platform—a cross between a festival and a workshop. We invite the great masters who have broken through the glass ceiling in the industry to speak to aspiring, mostly young, filmmakers who are yet to face their big life examination: their first movie. The common denominator is the future of the business.”

Idziak believes that future will include two main elements: interactivity and internet distribution. The interdisciplinary nature of FSO should help participants prepare for that eventuality.

“Five years ago we put a lot of emphasis on the 3D education at the event. Later, the people working in 3D in Poland were educated here. This year we offered training in creating content for Oculus Rift. People could test and design for the equipment, even though the commercial version won’t be released until next year. We always try to stick to the development of the market.” From 2016, Film Spring Open Air will also add a year-round mobile solution as part of its activities: The Cinebus.

This film studio on wheels will be fitted with the latest equipment and software to offer tailor-made workshops for the audio-visual industry, from first-time filmmakers to young professionals coming from various creative fields.

The bus is the first of its kind in Poland, as it is both a training facility and a mobile production unit for the cost-effective creation of small-scale productions.

As to how international he sees the FSO and the Cinebus becoming, Idziak welcomed the idea that similar institutions might take root overseas, but said the concepts were principally for those people in the East who are having trouble finding funding.

“I spent most of my life out of Poland and I feel very much in touch with my country. Nationality is not as important as it was in the past, but the progress of Polish filmmakers is at my heart, since Poland is on the frontier of East and West.”

Budding local film-maker Joanna Rozniak believes the event was definitely appealing for those looking to get projects off the ground.

“I came here to make a film. Outside, there are very few events or ways to network. So if you are not at a film school, you feel kind of excluded from the film-making world. I also came to listen to the mentorship available,” she says.

Price is also a factor. Due to the heavy subsidies provided by the Ministry of Culture and National Heritage, the Polish Film Institute, Malopolska Voivodeship, the City of Krakow and other state and sponsorship funds, participants only have to pay the equivalent of €70 for access to the leading figures in not just Polish cinema, but visiting dignitaries from abroad.

Some five Oscar winners have given talks in the past, and this year’s event opened with a screening of Natalie Portman’s directorial début “A Tale Of Love And Darkness” followed by a Q&A with the director herself.

Hardly publicized further than its own webpage and Facebook account, the event nevertheless attracted over 300 participants, mostly from Poland. Internationals may request a ticket for next year’s event, however.

“Everybody who sees potential in their professional carrier is welcome.” Idziak said. “Fun is a very important element, as fun is combined with discussion about disciplinary approaches. This mix of specialization can bring something new to the market. It is a melting pot where production tools like gimbals and new lights can be introduced and discussed. All the new tools essential for the films are on display here. Film architecture is very diverse, with special effects, etc, And with the active viewer coming into play soon, we hope to prepare people for this.”

Jerome Goerke (@wiverndigital) BA, MBA, is a journalist and consultant specializing in transmedia storytelling. He is Director ofWivern Digital – a pioneering storytelling and animated production house – and the creator of the Addison’s Tales animated musical storyworld.