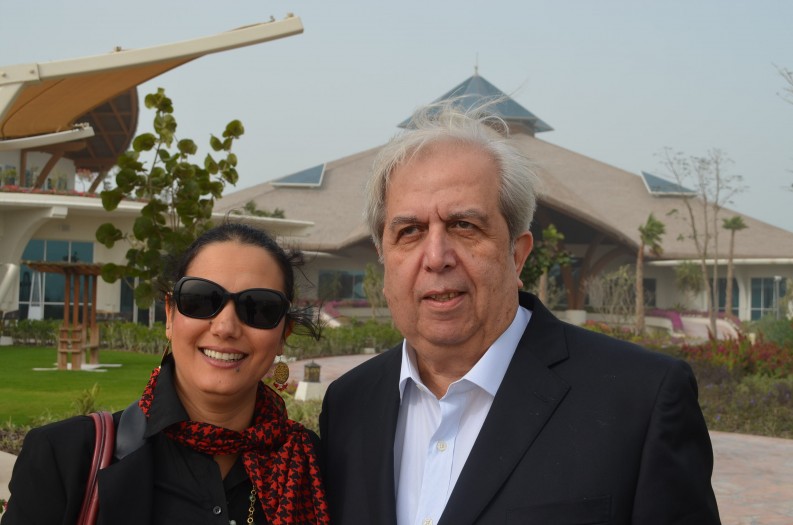 A whole lifetime seems to be written in Jarrous’ face.

Lebanon’s Nasser Jarrous has been fostering understanding between the Arab World and the West by helping open “closed markets,” such as Qatar and Saudi Arabia.

If there is one industry figure who acts as a kind of cultural ambassador between the west and the Arab world, it is Lebanon’s Nasser Jarrous. With his trademark cigar and expansive greetings, he is a much-loved personality on the international book fair circuit, someone who commands affection and respect in equal measure.

He was at the Sharjah International Book Fair earlier this month, meeting his many international contacts, talking about next year’s fairs in Qatar and Saudi Arabia, and selling books published by Jarrous Press and Publications, the Tripoli-based company founded by his father and which he now runs.

In addition to this day job, for more than ten years now he has had another role – one for which he is famous in the international publishing community. He acts as an intermediary between east and west, smoothing the way for western publishers to attend book fairs in the region, making introductions between interested parties and working hard to open up the more ‘closed’ markets such as Saudi Arabia. It is a role for which he seems born.

“For me it is a real pleasure. It is like a hobby. I like to see people, to make contact with people, to gather people from east and west together. It gives me real pleasure to see the west and the east know each other. I am a man of dialogue, although my wife says this isn’t true. ‘You never listen to me’, she says.

“I want the industry to be like an international club for all people working in international publishing. We are all friends together. I believe in global contact.” Nasser Jarrous enjoys one of his beloved Monte Cristo cigars.

Acting as an Ambassador

His ambassadorial role began informally back in 2003 when the Arab World was Guest of Honor at Frankfurt. “The comment was very positive on both sides,” he recalls. “It helped each region to know the other better and opened the door for more collaboration between Arab publishers and the west.”

This led to a more formal arrangement with exhibition-owners Reed in 2006, with a particular focus on providing links between US publishers and the Arab world for the Reed-owned London Book Fair and Book Expo America. Next year, Jarrous will celebrate his tenth anniversary of holding this special role.

Everyone has a ‘Nasser’ story – his penchant for huge cigars (Monte Cristo), his love of Turkish coffee (“well boiled”) and his nights out at various restaurants in Dubai. To this list must also be added – how can one put this – those occasions when the rigors of the day have led to the occasional closing of the eyes during a conference (and who hasn’t done this themselves?). Tony Mulliken of Midas Public Relations recalls Nasser’s mobile going off on one such occasion. “He suddenly woke up and barked ‘Hello! Hello!’ in that loud voice he has. Everybody heard – it was a lovely moment.” Nasser speaks English and French, in addition to Arabic, and has a warmth with people that is engaging. To share a taxi with him and the Tunisian children’s storyteller and consultant, Wafa Mezghani, and to hear them switch between Arabic and English mid-sentence, is a joy.

Jon Malinowski, of Combined Book Exhibit in the US, compares him to the sage in Star Wars. “Over the more than 15 years we’ve know Nasser, he’s been our Obi-Wan Kenobi in the Middle East. He’s also been a great friend, ambassador and mentor over the years we’ve spent working with Arab publishers and distributors in the region. I’m sure we would not have achieved as much as we have without him.”

Born in Haifa, Palestine, in 1947, a whole lifetime seems to be written in Jarrous’ face – the experience or war and of personal tragedy. His father ran a book and magazine distribution company that moved with the family to Tripoli in the year of his birth. He attended Italian school in that city and then studied Law, becoming a lawyer in Beirut in 1970. “I practiced in everything at first, and then moved to commercial. Because of the war, I had to return to Tripoli. This was a very dangerous time. There were kidnappings, bombs, it was a dirty war. During this time there was no contact between the cities. You were always wondering what will happen? You are afraid when your children go to school. The family of my first wife moved to the mountains because of the situation.”

You might expect some trace of anger in him, borne of the long troubled history of this part of the world. But he simply says: “We are a small country. All the big powers want to put their hand on Lebanon, especially since we have Syria to one side and Israel on the other.”

In 1974 he married Gloria, with whom he had two daughters and a son: Rania, 39, Rola, 37 and Adib, 36. Tragically, Gloria died of cancer and in 1990 he married Gina, a painter and art teacher, with whom he has another daughter, Nour, 22. He has two brothers and a sister, all of whom are involved in the family business which he joined himself in 1980.

He likes to read history and is also fond of tennis and football, though if you ask him which team he follows he says “I change all the time. I like to follow the best.”

His internationalism may have its roots in memories from his childhood in Lebanon. “When I was young I remember looking to the other side of the Mediterranean, looking to Europe and to France and Italy. I do think there is something of benefit on both sides. We have the spirit of the Orient – all religion comes from the Orient – but we need the technology and expertise of the west. If you can combine the two sides, you can create something special. You can let the west know about our way of life and culture, and this is really what has happened at Sharjah. A big relationship with the west can come through these book fairs.”

He is keen on openness and dialogue and is proud that his daughter Nour likes to use the sentence “We will fight you by the pen.” He believes talking and contact is the way forward and that over and over again the west has to know that Daesh/Isis “is not Islam – that it is not the spirit of Islam.” Jarrous himself was raised a Catholic and will still occasionally attend church.

With an eye to the future, he has established ‘JEES’ – ‘Jarrous for Events, Exhibitions and Studies,’ which will allow his children to continue the work he does now. Despite a recent hip operation, he seems as keen as ever to continue – and long may that be the case. “I am always looking to find a new project,” he says, drawing on his cigar. “I always like to have something new, something to do with publishing and reading. I don’t think I will ever retire. Inshallah.”