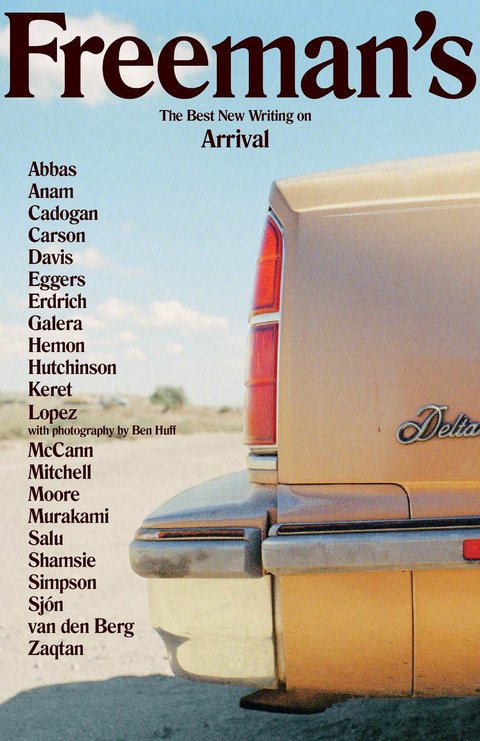 Part 2 of an interview with writer and editor John Freeman, in which he discusses publishing several books and launching his own journal, Freeman’s. Read Part 1 here. In the five years John Freeman had been working for Granta, the nearby Manhattan neighborhoods had drastically changed, displaying more excessive wealth.

“My only thought was to publish my book, How to Read a Novelist,” he said of his collection of author interviews. “What sidetracked me was New York itself, and the social changes. There was so much more income inequality, the social services were heavily strained. There were so many more homeless and so much more wealth.”

Freeman started talking with an editor friend Colin Robertson, and the idea for Tales of Two Cities was born. The book became a swirling portrait of high and low in the city, stories from Colum McCann on his travels with the homeless living in city train tunnels in the 1990s to a story by Zadie Smith of a middle-aged drag queen buying a new corset. There are stories of tenants fighting abusive landlords and a 15-year-old reflects on her gentrifying neighborhood in Brooklyn.

Freeman himself writes a devastating introduction, where he tells of buying the loft next door with a small inheritance, while his younger brother, who was battling mental illness, lives in a homeless shelter four blocks away. It is a dramatic short piece, and his brother does survive.

“Literature and fiction make people engage with issues in a way that news alone cannot do,” said Freeman. “I worked on that book with Colin. When I turned it in, I thought, ‘I want to do something similar to this.’ For me, fun is an intellectual itch, with a social component.”

It is good to have powerful friends. “When I left Granta,” said Freeman, “Morgan Entrekin of Grove Press said that if I ever wanted to go into business with him, to let him know. I went to Morgan and said, ‘I am thinking of starting a literary journal.’ It’s like saying, ‘I’m thinking of buying a 1978 Rolls Royce. Do you think it is reliable?’”

The two men met for lunch. “Morgan didn’t blink,” said Freeman. “He seemed to be onboard 100 percent. It’s the easiest big step I’ve ever taken … he talked me out of three issues a year. I am so glad he did. One issue would be too little and four issues would be too much. Two issues become more of an occasion.”

The Launch of Freeman’s

The creation of the journal Freeman’s was announced in the summer of 2014. It took Freeman six to nine months to accumulate pieces from contributors.

One coup was an unpublished short story from Haruki Murakami. “The editor at Granta Japan had told me that there was a collection of short stories being translated. I had heard that The New Yorker passed on one story. I’m friendly with Gary Fisketjon, from Murakami’s publisher Knopf, and I know Binky Urban, his agent.” Freeman approached the powerful agent, admitting that he couldn’t pay as much as he would have paid at Granta. “My phone buzzed while I was at McNally Jackson bookstore,” said Freeman. “It was Binky…she said, ‘John, you can have the story. I think it is a great story.’”

With the Murakami story in hand, Freeman was able to line up other literatis, like the novelists David Mitchell and Lydia Davis, who submitted a 56-page essay on her attempts to learn Norwegian. He also grabbed Colum McCann to write a nonfiction piece. For a while, he had the Italian novelist Elena Ferrante, but she backed out because she had her new novel to write.

Freeman’s starts with six striking, short nonfiction pieces, including work by Louise Erdrich, Mitchell and McCann. The pieces are modeled on The New Yorker’s “Talk of the Town” section. “When the Talk pieces are good, they are amazing,” said Freeman. “I like short forms, like stories and poems. I find that you sometimes get more in 900 words than in 9,000. With a journal, you can take these pieces further and make them less sleek.”

One of the best pieces in Freeman’s is Aleksandar Hemon’s “In Search of Space Lost,” a wry chronicle of Hemon’s parents’ efforts to rebuild their lives in Canada after fleeing the horrible bloodshed in Bosnia during the Balkan Wars. The parents had lost everything in Bosnia. They become supers at a large apartment building in Ontario, and the father turned old refrigerators into meat smokers in the basement.

“One of the things I love about Sasha (Hemon) is the warmth that he gives his friends is accessible in his writing,” said Freeman. “I am grandfathered into this friendship because Nicole is his agent. Sasha as a writer is never far from his ethical compass and that compass is always operating when it comes to language and how he categorizes and treats the world, especially when it comes to displaced people.”

In the time-honored tradition of literary journals, Freeman paired known writers like Murakami and Davis with new voices, like Fatin Abbas, a young Sudanese writer who was educated at Oxford and mentored by McCann at the Hunter College MFA program. “I tracked Fatin for five or six years before I got this piece, which is an excerpt from a novel.”

Some writers are easier to corral than others. Freeman had recruited the New York-based Jamaican writer Garnette Cadogan to write a piece on walking New York City’s income equality fault line for Tales of Two Cities, going between the Upper East Side of Manhattan and the South Bronx. “Garnette is the worst person when it comes to deadlines,” said Freeman with an exasperated chuckle. “His deadline for the New York piece was in November. He turned it in in April, the night before galleys went to press.”

In his new piece for Freeman’s called “Black and Blue,” Cadogan writes an unsettling but still ironic piece on being a black man and interacting with New York City police, where the suspicion is always on him and some of the encounters are perilous.

Freeman’s mother, who died in 2010, informs the first issue of Freeman’s, which has the theme of Arrival. Freeman writes of a teenage self and his mother flying to upstate New York. Both mother and son are terrified during a stormy flight. “I’ve written about my mother’s death in one form or another,” said Freeman. “I’ve always wished that my mother was around, so she could see my book work. She grew up in upstate New York. She was provincial, but didn’t live a provincial life of the mind. I think she would have loved to meet the people in my life, like Sasha Hemon, or Louise Erdrich or Tahmina Anam, some of the people in this issue. She never got to travel, to live the mind her life lived, because she died young at 68.”

“The reception of Freeman’s has been very warm,” said Freeman. “My goal is not to publish for the 1,200 writers who get all the cultural references. This journal is about narrative and storytelling. I believe that stories can reach across different levels of readers. I put out this issue to offer lots of different kinds of writers.”

Freeman has turned himself into ultimate promoter of great literature. As he travelled through Europe and America, to promote Granta, he is doing the same with Freeman’s. Soon after our interview, John Freeman went to Berlin to meet with his writers Fatin Abbas and Michael Salu in Berlin and Oslo to meet with Lydia Davis on Freeman’s.

Freeman and Aragi’s loft, which is made from two very large post-industrial spaces, allow them to throw hip book parties, complete with steaming artisanal cocktails, for Aragi’s writers like Junot Diaz and her new star Claire Vaye Watkins. In the room where Freeman and I spoke, the space was drenched with sunlight from a mammoth skylight and the walls were lined with white built-in bookshelves, full of neatly ordered books. Their parties are full of young, sophisticated writers and their agents. Aragi and Freeman have taken the mantle of important literary events from the George Plimpton, the late founder of The Paris Review.

In addition to running Freeman’s, Freeman is also an editor on the new website venture LitHub.com, where he commissions two pieces a month. He also teaches a course for MFA candidates at the New School for Social Research on running a journal. “It is basically a class on editing, reading and publishing. No writing,” said Freeman. “I am trying to encourage the students to be entrepreneurial. I tell them all about publishing journals, how much it costs and the social media aspects.”

The second issue of Freeman’s will be published in June 2016 and the theme will be Family. Freeman will publish pieces by Hemon, the 2014 Nobel laureate Patrick Modiano, the new Booker Prize-winning novelist Marlon James, the Pulitzer Prize-winning poet Tracy K. Smith and the poet Sharon Olds.

“For the first issue, I chose the writers based on who I liked, but as I step back and look at it, there are a lot of different styles and backgrounds,” said Freeman. “To me, that’s the pleasure of reading.”

How did Freeman wind up naming Freeman’s after himself? “Part of it was joking, but part of it was serious,” he said. “Part of it is personal, because I don’t have kids. I’d like to have some posterity in the world.”

For all his editorial success, Freeman is still the son of social justice activists. “I hope this project is able to work against the idea that some people are more human than others,” he said. “Great writing in the world exposes what it means to be human.”

Dylan Foley is a freelance writer in Brooklyn, N.Y.