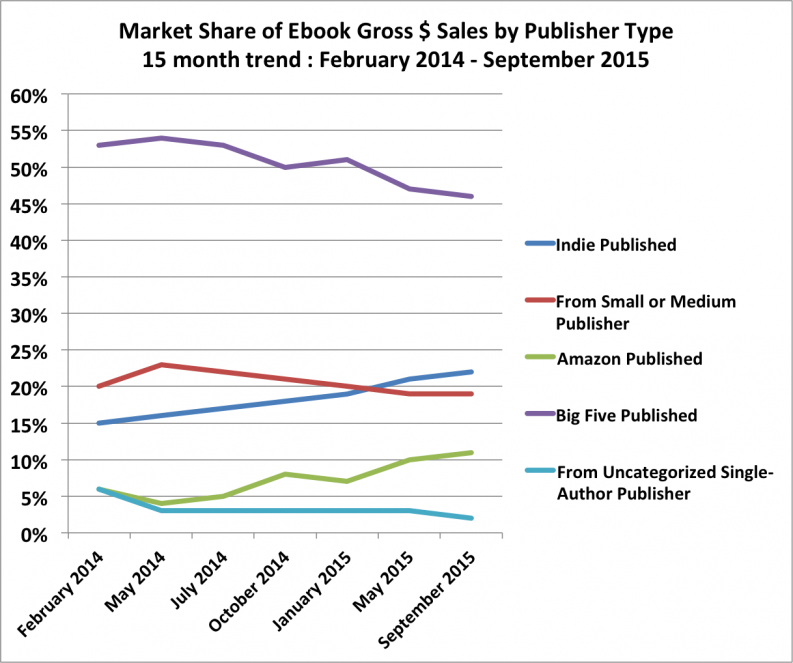 If publishers hope to grow ebook sales, they must find ways to innovate in actionable, tangible ways that will increase sales, argues Sol Rosenberg. Deja Vu hung thickly as I read the headline. “Again?” I asked. This time, it was Publishers Weekly with “Soft E-book Sales Underscore Down HBG Results,” coming on the heels of the PW article three days ago “Declining E-book Sales Hit Home.”

That makes three of big five reporting declining ebooks sales. Is this news?

Unfortunately, not so much. The stats and press articles have been reporting this neo-dramatic death march for far too long.

Prima facie, it makes little sense. While everybody and his brother has been getting a smartphone (68% according to Pew Research) and 2.6 billion (with a ‘b’) smartphones globally, while many people are juggling several devices and Pew says 45% of the population has a tablet, we have been nursing a flat (and now declining) ebook market for several years.

Of course, it wasn’t always that way. Remember the good old days? In 2012 the Los Angeles Times (among others) trumpeted “Ebook Sales almost doubled in 2012” as everyone expected the party to continue. A survey published in March 2013 projected “Almost Half of Americans Expect to Buy
Then, in mid 2013, we saw this from the Book Industry Study Group:

Once thought destined to reach 50% or 80% of all book buying and reading in the U.S., ebooks have stalled out on their way up to higher altitude.. the share of all new ebooks sold — both in units and dollars — has been flat at about 30% and just under 15%, respectively.

The news from there forward has been pretty much the same. Roughly 25-30% ebook penetration in the UK and the UK (in the consumer market, broadly speaking)

The declining sales headlines kept coming. There are too many to mention and you must have seen some of them, both in the publishing press and others. Not too long ago, for example, on March 3, 2015 TechCrunch ran this story: “Publisher Revenues Down As Ebook Buying Slows,” And in October Goodereader “eBook sales plummet 10% in first six months of 2015.”

Then of course we come back to the two headlines this past week. What do the CEOs of these companies say? Reading their comments are an ode to PC-esque PR mamby-pandyness.

In prepared remarks, HBG USA CEO Michael Pietsch said soft ebook sales in the quarter were somewhat offset by the “excellent performance of downloadable audio and our distribution business.”

“S&S CEO Carolyn Reidy said she is not too worried about the decline — yet” going on to say she did not blame the sales dip on higher prices and “… she wouldn’t be surprised if ebook sales started to rise again.”

Really? So the answer is “Let’s keep doing the same thing” and the market will magically reverse and grow?

So – why is the market declining? Why aren’t we even moving the needle a bit? The number of devices keep rising dramatically, people are spending many hours on their devices — and even reading (Remember the WSJ Article on the “Rise of Phone Reading” ) yet ebooks are declining?

There is, however one company who has been growing their market share. Headquartered in Seattle, you know to whom I’m referring. Especially when you look at the AuthorEarnings September report:

So far in 2015, the AAP’s reports have charted a progressive decline in both ebook sales and overall revenue for the AAP’s member publishers.

During that same period in 2015, Amazon’s overall ebook sales have continued to grow in both unit and dollar terms, fueled by a strong shift in consumer ebook purchasing behavior away from traditionally-published ebooks and toward indie-published- and Amazon-imprint-published ebooks.”

See the illustration below… Perhaps we are left with more questions than answers. But one thing is clear: that company in Seattle seems to be growing. They also seem to be the ones innovating the most.

We must find ways to innovate and grow our market. Actionable, tangible ways. Maybe even take a page out of what has made others, like Amazon successful.

Sol Rosenberg is the CEO of 1World Content, Inc. and a principal consultant for DDC. He has been a presence in digital content seemingly since the days of the abacus.