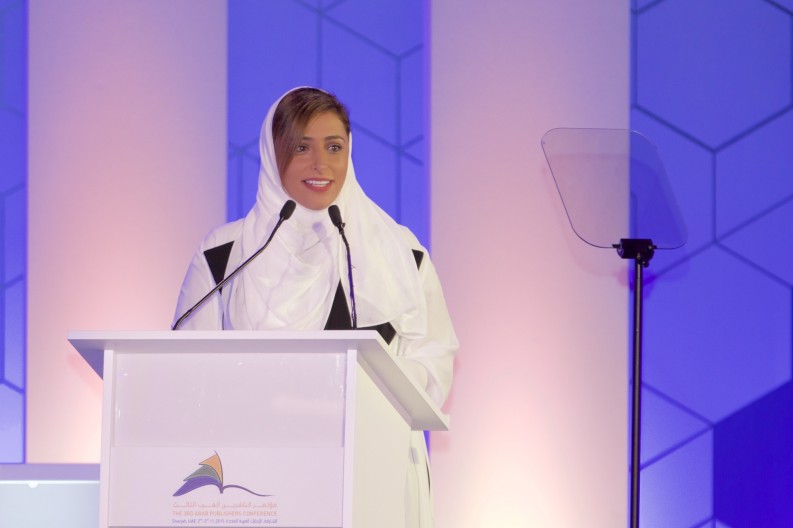 Sheikha Bodour delivering her “call to action” at the Arab Publishers Association conference.

Sheikha Bodour Al Qasimi of the Emirates Publishers Association is calling for a “serious discussion” of “redefining the principle of freedom to publish.”

Sharjah, UAE: A serious discussion about freedom of publishing both in the Arab world and worldwide needs to take place if publishers are to be able to “carry on with their mission and contribute to the prosperity and development of their societies at all levels,” Sheikha Bodour Al Qasimi, president, patron and founder of the Emirates Publishers Association told delegates at the Arab Publishers Conference in Sharjah.

On the sensitive issue of the freedom to publish, she said there wasn’t an easy, single answer. “Countries vary in their approach. Laws vary. Cultures also vary, much like the history on which they are built. This is why it is not easy to define one unified framework for freedom of publishing, but this does not mean we should not address this subject.

“So today I call on all stakeholders to launch a serious and meaningful discussion about redefining the principle of freedom of publishing. International standards need to reflect the cultural diversity of all countries involved. I am confident that we can engage in meaningful discussion about this subject with tolerance and flexibility to reflect our respect for the principle of freedom of publishing, as well as reflecting our respect for each nation’s culture and uniqueness.”

She went on to note how intellectuals refer to the world as becoming like a village, but she goes further and believes that with the rapid rise of the internet, “the world has become a single household.” This leads to a greater responsibility among publishers to promote understanding and dialogue between cultures and civilizations through supporting translation.

“Revitalizing the translation sector in the Arab world is not only a cultural requirement, it is also an opportunity to develop the publishing sector and diversity its activities and sources of income.”

Sharjah already famously supports translation through its various grants that help the deals struck in the matchmaking sessions that precede the fair. Greek agent Evangelina Avloniti of the Ersilia Literary Agency was particularly pleased with her matchmaking day. “I was keen to find Syrian writers and I met a Syrian publisher who is going to send me some things,” she said. “It is so good to meet people that you wouldn’t meet in London or Frankfurt — and I am deeply grateful to Sharjah for the opportunities this has given me.”