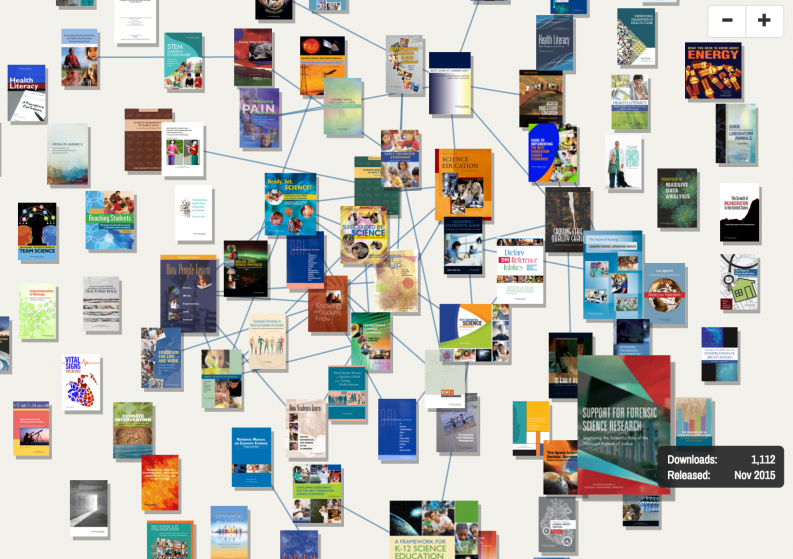 AcademyScope, pictured above, will provide a model for the AAUP’s UPScope.

A Mellon grant is funding UPScope, a new visual discovery platform for long-form scholarly writing from the Association of American University Presses.

On October 13, the American Association of University Presses (AAUP) announced the receipt of a $166,000 planning grant from The Mellon Foundation to explore the creation of a discovery and delivery platform for long-form scholarship. The platform, which they have named UPScope is modeled after the content visualization interface AcademyScope created by National Academies Press.

“Viewing AcademyScope for the first time was revelatory,” said Peter Berkery, Executive Director of the AAUP. “What if we could provide that kind of intellectual access to the greater corpus of knowledge embedded in scholarly monographs? And what if that point of discovery was also a doorway for readers and researchers to access the content in a direct and easy way?”

Using the grant, AAUP will investigate business models, create technical specs for a web-based platform, and develop a proposal for implementation over the next six months. Berkery will lead the project in conjunction with UPScope Project Manager Ellen W. Faran, the recently retired director of MIT Press.

This week also marks the start of University Press Week (UPW), a celebration to draw attention to the achievements of the sector and numerous events are being held both online and on campuses globally. You can follow along online using the hashtags #ReadUP and #UPWeek.

Tomorrow, UPW will host a free, live Google Hangouts event at 3:00 PM EST covering “Opening Access: The Reinvention of the Academic Book” moderated by Jennifer Howard (Chronicle of Higher Education). The conversation will include Frances Pinter (Manchester University Press/Knowledge Unlatched), a publisher of both traditional print and innovative Open Access monographs; Peter Suber (Harvard University Berkman Center for Internet & Society), one of the foremost theorists of Open Access; Augusta Rohrbach (author of Thinking Outside the Book), a scholar of book culture embedded in a world of digital communications; and Matthew K. Gold (CUNY Graduate Center)