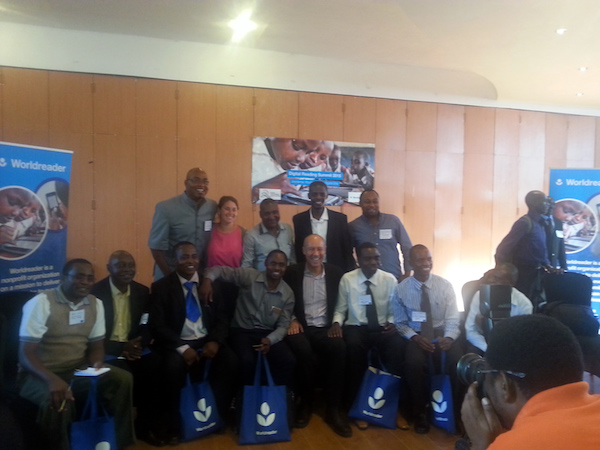 David Risher poses with some attendees at the WorldReader Summit

The first of a two-part report from the 2015 East Africa Digital Reading Summit in Kenya looks at developments in e-reading and library ebook use.

The first time David Risher, CEO and co-founder of WorldReader, came to Kenya was in 2013. He flew in from neighboring Tanzania, and the airline misplaced his entire luggage, leaving him in shorts and a shirt. As he booked into the upmarket Sankara hotel in Nairobi, he explained his predicament to the check-in attendant, stating that he was due to meet the Kenyan Minister of Education the next day and didn’t fancy doing it in shorts! The bemused staff at the hotel provided him with a dapper suit and shoes. Risher told this story earlier this year during his second visit to Kenya, to participate in “The 2015 Kenya Publishers Association & WorldReader Partner Summit.” The two-day Summit drew participants from Kenya and nearby countries, including Tanzania, Uganda and Rwanda.

Day One was a joint conference event featuring a host of speakers, moderated by Joan Mwachi-Amolo of WorldReader (Senior Manager, Kenya Operations). First up was the then outgoing Kenya Publishers Association (KPA) chairman Lawrence Njagi, Managing Director of Mountain Top Publishers. He said that after publishing the memoirs of former Kenyan Prime Minister, Raila Odinga (The Flame of Freedom), he had been inundated by US buyers to make it available on a digital platform. He quickly put it on Amazon.com. He added that although he doesn’t see a conflict between print and digital publishing, ebooks in Kenya are currently confined to “elites” who are “not the ones who need them most.” Panel session with Muthoni Muhunyo, Will Clurman and Alexander Nderitu.

The second Speaker was Maria Cherono from the Ministry of Education, Science and Technology. She opined that digital platforms have the capability of increasing reading in the country. In 2014, Chereno said, the gov’t undertook an ICT study under a program called PRIMR (pronounced ‘Prima’). They provided e-readers (tablets) to teachers and then monitored the effectiveness of the new technology in the classroom. The pilot program, which involved 150 teachers, showed tablets to be cost-effective. A National Tablet Program was then launched. The plan is to now scale up the numbers of tablet-enabled users under the program to over 1500 in 2015. She thanked affiliates like WorldReader who had partnered with the Min. of Education on such gov’t programs as PRIMR and Tusome.

Next in line was Risher (a former employee of Amazon). A slim, sociable American with almost no facial hair, he said he got the idea for WorldReader about six years ago while traveling abroad with his family. They were in Ecuador, helping a local orphanage, when Risher noticed a room with a padlocked door. He inquired about it and was told that that was the library. Books were hard to come by in that region, he was informed. He asked to see the contents. When it was opened and he saw the outdated, unread collection of books, and he wondered why trees should die to make books that will never be read. Risher realized that he could bring digital books to them – and a wide collection of literature — at relatively low cost. In other words, he “could use technology to solve the problem.”

Putting an E-Reader in Every Child’s Hand

He started the WorldReader program (providing free e-readers and e-content) in Ghana and later Kenya. The plan was to put a reading device in every child’s hand. After five years of WorldReader, two million people are now reading digitally. About 15 thousand people in Kenya read on WorldReader devices. About 16 WorldReader libraries have also been established inside Kenya. “What matters most is not the multiple devices we have but what’s in them,” Risher said, referring to the wide range of local and international content available via WorldReader devices and mobile phone app. He then read out the poem ‘Rhythm of Life’ (about Kenya’s celebrated marathon runners). The poem is from the ebook, ‘The Moon is Made of Green Cheese’, which is available on WorldReader devices. “Reading is our best and only vaccine against hopelessness in the world,” he emphasized. The founder gave way to a consumer: The next speaker was Eva Nyawira, a young student, who recited a poem that she authored herself. She said that she reads books on her cellphone at home (as mobile devices are prohibited in school), using the free WorldReader app. In the Q&A session that followed, an audience member asked her what some of her favorite books were. She said that she was a fan of Sherlock Holmes detective stories. Another participant asked her whether she reads any local content. She answered in the affirmative and cited Stanley Gazemba’s ‘Grandmother’s Winning Smile’. Joan Mwachi-Amolo, mentioned some recognizable titles that were currently popular on WorldReader were included Attack of the Shidas, a children’s sci-fi book by Muthoni Garland, and You Were Born an Original, Don’t Die a Copy, a motivational book by John Mason. The next speaker was Carol Kayoro from Kenya National Library Service (KNLS). She said that a big increase had been noted in library attendance since KNLS introduced e-readers by WorldReader. The devices had mostly attracted a young audience. KNLS has introduced innovative ways to attract readers, although adults are not as drawn to e-readers as children and may require “tailored content.” However, there is high demand for the readers from children. E-readers are now the “main attraction” in some libraries, with as many as ten schools a day now making school visits’ to libraries.

Places with places with e-reader libraries include Kisumu and Kibera but she would like to see e-readers in all 60 branches of KNLS because some branches are small and cannot accommodate very many physical books. In response to a question as to whether KNLS devices had been stolen or damaged, Carol said that so far, only one device loss has been reported, in Kisumu. However, charging the devices had been a challenge during outreaches or power outages.