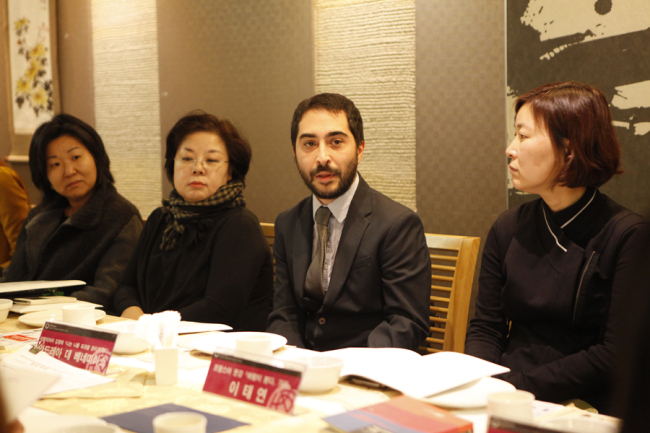 Andrea De Benedittis (center), who won for his translation of Kim Young-ha’s novel “I Have a Right to Destroy Myself” into Italian (Literature Translation Institute of Korea)

Several Korean translators and winners of the 2015 Literature Translation Awards given by LTI Korea discuss the particular nuances of the Korean language that make it tricky at times to work with. Andrea de Benedittis, one of the winners of the 13th Korean Literature Translation Awards for his work translating Kim Young–ha’s I Have the Right to Destroy Myself into Italian (“Ho Diritto di Distruggermi”) noted that “It’s always difficult to translate dialects. It sounds awkward when we translate it, so sometimes we have to get rid of it.”

The veteran Korean translator, who has translated several Korean novels into Italian added that, “… in order to properly deliver the cultural context, we need to explain the historical background, but local publishers won’t allow us to add footnotes. Properly delivering the tone of the writing itself is another difficulty.”

Zhang Li Li, who translated Young Young’s Summer into Chinese, commented that “It was difficult to read between the lines. I wasn’t quite sure what the author really wanted to deliver to the readers.”

“What was difficult about translating Korean into English was to transfer informal and formal tone of speeches that exist due to social hierarchy. Also, certain titles such as unni which can be used in different contexts or translating chonsoo, the degree of relationship in the family tree, were difficult,”

The Times reported that the books receiving awards were one which had already been translated and published by “local” overseas publishing companies. Winners included Lee Tae-yeon and Genevieve Roux-Faucard, who translated Hang Kang’s Breath Fighting into French, (Lee noted that “It was difficult to translate the abundant usages of onomatopoeic and mimetic words. Because our publishers don’t allow footnotes, I had to explain terms such as hanbok. The French don’t like repetitive expressions so I tried to get rid of those.”); Kwon Eun-hee and Seong Cho-Lim who translated Bae Suah’s Sunday Sukiyaki Restaurant into Spanish, and Vu Kim Ngan, who translated Jeong Yu-jeong’s Seven Years of Darkness into Vietnamese.

The awards are given by the Literature Translation Institute of Korea and are the only government-sponsored awards for literaturein the country.