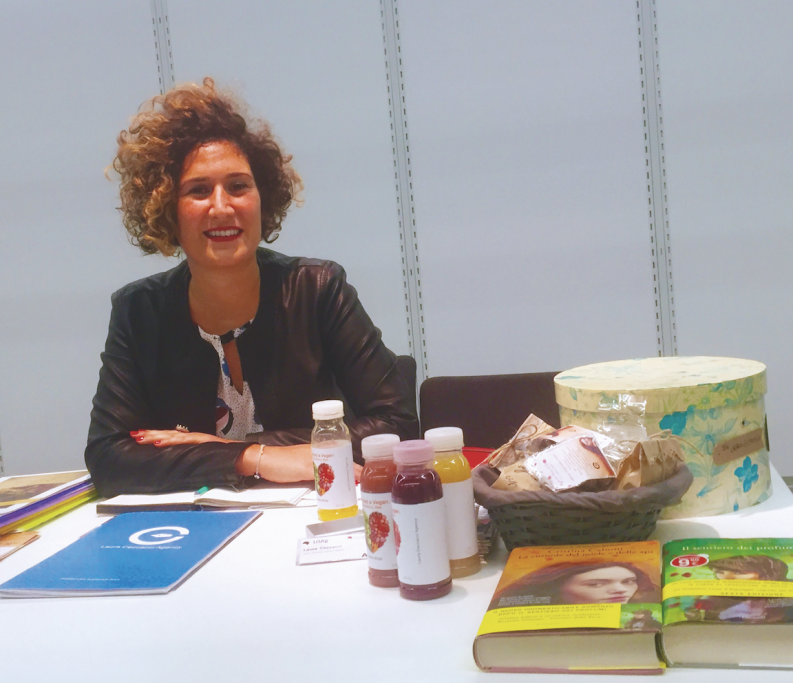 For Italian agent Laura Ceccacci, marketing her authors is a creative endeavor.

Laura Ceccacci’s table in the Literary Agent’s Center is more colorful than most.

Books with bright orange and green covers are displayed next to many-flavored juice bottles and a basket of homemade sweets and biscuits. The bottles read: I Married a Vegan: A True Story, Alas. It’s the title of author Fausto Brizzi’s new book, to be published by Einaudi in 2016.

Thirty-four-year old Ceccacci opened her literary agency in Rome in 2014. After completing a Masters program in publishing and editing in Barcelona, she went on to find a job with Random House Mondadori. She then worked as an editor for Fazi and Fanucci Editore before learning the agent’s trade with the Kylee Doust Agency.

When she left Kylee Doust, several of her authors came with her, including Cristina Caboni, whose bestselling novel The Secret Ways of Perfume has sold 100,000 copies in Germany since publication in June.
Caboni’s book was Ceccacci’s first big auction, with six publishers involved, and she sold it to 25 countries including the US and the UK. It was with Caboni, said Ceccacci, that “I felt strong enough to launch my own agency.”

“I really have fun with commercial literature, and I really love the marketing aspect,” said Ceccacci, who enjoys putting together marketing accessories to go along with her books. For Caboni’s manuscript, The Secret Ways of Perfume, Ceccacci hooked up with perfume shops and handed out small perfume-infused handkerchiefs to editors. For Caboni’s next novel, The Secret Way ways of Honey, Ceccacci is distributing small packets of homemade honey candies made by the author, who is a beekeeper.

Neopolitan scriptwriter and director Salvatore Basile, whose novel The Unpredictable Journey of a Lost Thing will be published in 2016 by Garzanti has been Ceccacci’s big Frankfurt success so far. In a seven-way auction, Ceccacci sold the manuscript to Blanvalet Verlag for nearly 200,000 euros.

Besides marketing, Ceccacci works very hard on the manuscripts. “I really love to get into the books with the author, and I work hard on them. Sometimes, I only receive an idea and I work with the author on it. I never send books out until I’m sure they are powerful. I’ll often make a cover with a designer and go to the publisher with a clear pitch and clear marketing ideas. The important thing right now, when the market is so hard, is to be really convinced and get straight onto the path of readers.”

One book she spent time working on recently was a psychological literary thriller by Mirko Zilahy, the translator of Donna Tartt’s The Goldfinch. To be published by Longanesi, the thriller is set in Rome and shows the city’s underbelly. Ceccacci had maps made to show where certain scenes take place; she grins when the comparison is made to Zafón’s Barcelona novels and the spin-off products derived from his books.

“I really would love to find strong literary voices in Italy,” said Ceccacci, who is presenting Lorenza Pieri’s first novel, Lesser Isles at Frankfurt, already sold to E/O in Italy and to publishers in Israel and Germany. She would also like to represent Spanish or Latin American authors.

“I really think literature has a lot to learn from TV series, I’m curious to know where this will go … You have these great screenwriters in the US; what they write are novels. I dream of something like Breaking Bad. I was addicted to it. I couldn’t read a single page of a book until I finished the series.”