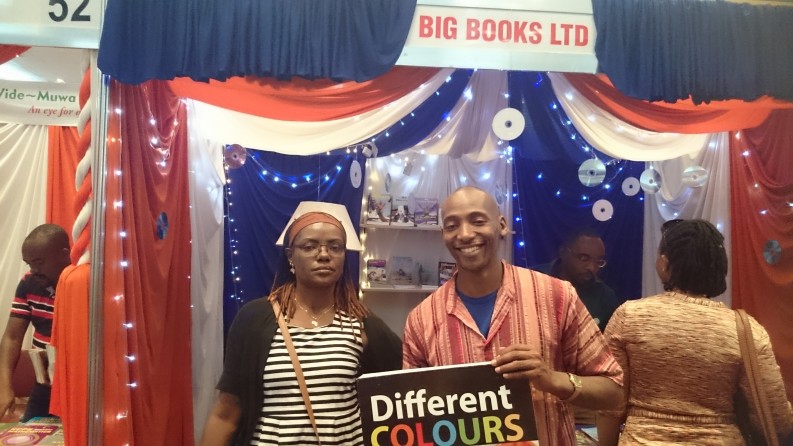 Kenyan publishing is in a perpetual fight for survival, but sees potential in the digital revolution to open new means of distribution and production. David Waweru, CEO of Word Alive Publishers and current Chair of the Kenya Publishers Association, was a school-teacher before he ventured into publishing. But before that, he was a boxer of some repute. Becoming a champion boxer was one of the dreams he held as a child. In his youth, he and his brother hired a coach, bought training equipment and went on to win several boxing matches. Waweru credits books for his pursuit of dreams. Narrating this story to school kids at the 18th Nairobi International Book Fair last month, he said, “When you read many books, you stretch your imaginations and ‘go places.’”

The school children and their teachers, who had travelled to the venue from all over Kenya, had gathered in the Seminar Room for the unveiling of the 2015 eKitabu National Digital Essay Contest winners. Founded in 2012 by American Will Clurman, eKitabu distributes e-books in Kenya on behalf of publishers. One of the sponsors of the Digital Essay Contest this year was SwahiliHub, an online division of Nation Media Group that promotes all aspects of the Swahili language. A representative from the portal said that Swahili now has an estimated 150 million speakers worldwide.

The Nairobi International Book Fair (NIBF) is an annual event organized by the Kenya Publishers Association (KPA). Officials are drawn from the top-tier of Kenyan publishers. The theme for this year is “Twende Digital” (Let’s Go Digital) and is aligned with Vision 2030 — the government’s ambitious blueprint for transforming Kenya into a middle-income country. During the opening ceremony, Mary Maina, the Chair of the NIBF, said that the festival’s events would include book launches, digital marketing and sales training, discounted sales, children’s activities, seminars, sales of book rights and a digital essay contest. In addition, she said that the event had a record attendance by foreign exhibitors, led by India which had nine. Others represented nations were China, the UK, the USA, Nigeria, Ethiopia, Tanzania, Uganda and Senegal.

The Chief Guest at the opening ceremony was Eng. Victor Kyalo, CEO of ICT Authority. His speech was preceded by that of David Waweru who gave a brief overview of publishing history: A winner of the eKitabu Essay contest receives her prize.

“When Johannes Gutenberg invented the moveable type in Mainz, Germany, around 1440, it inspired booksellers to organize the first Frankfurt Book Fair … Before (Gutenberg), ideas were captive, hoarded by those with knowledge. The printing press enabled the spread of ideas. Revolutions have been caused by the printed word…The next few years will be a game-changing moment for Kenya, thanks to technology…The spirit of the new technology is not to consolidate ideas (as in the past). It is to bring out new talent, ideas, authors … It is to open up the space to everyone with an idea to write.”

To prove his point, he requested a small girl sitting in the front row to stand up. He pointed out that she was just ten years old and had already authored her first ebook. However, he was quick to dispel the fear that ebooks will in future cannibalize their print counterparts: “The digital book will co-exist with print books,” he asserted. “In the US, print books are still contributing 75% of revenue despite a 1,000% rise in ebook sales.”

Government Offers Little or No Support

Kenyan publishing has never had it easy — from recent a 16% Value Added Tax slapped on educational material to rampant piracy and lukewarm support from the state — and as KPA Chair, Waweru is experiencing the frustrations first-hand. He said: “Recently, the Ministry of ICT (MOICT) hosted a key stakeholder meeting to assess the readiness in providing digital content and to explore possible business models for delivery. The President’s Delivery Unit was part of the consultation.” Naturally, the publishers gave their input. After some time, Waweru received the following message from the PDU: “I am of the opinion that the pressure should be on you as content innovators to develop relevant digital content.”

In his speech, ICT Authority chief Victor Kyalo reiterated the government position: “The government only needs to be involved in regulation and quality assurance. KPA should come up with the business model because they (publishers) are the ones in business.”

But these types of challenges are unlikely to dampen the spirits of the KPA Chair who remained upbeat throughout the festival. As in boxing, he appeared ready to go the whole ten rounds, if necessary: “Kenya is going through a significant shift in educational technology as we get into the era of DigiSchool — The Digital Learning Program for Schools … The MOICT is in the privileged role of midwife. DigiSchool is in the ‘prenatal’ period. It is to be launched in June 2016 … MOICT and the Ministry of Education are the midwives and should act in the best interests of the Kenyan people. Let’s think long-term.”

Referring to the young girl who had earlier been pointed out by Waweru, Victor Kyalo said: “Some years ago, it would have been impossible for a ten-year-old to publish a book. Today, if you have a smart idea, you can put it out there through publishing or putting it on a blog.”

The highlights of the 18th NIBF included two separate book awards: The lucrative Burt Award for Children’s Literature and the Text Book Centre Jomo Kenyatta Prize which is managed by KPA itself. The Kenyatta Prize honors both English and Swahili Books in three categories: Adult, Youth and Children. According to Mrs. Mary Maina, the NIBF Chair, the purpose of this award is to “To encourage and promote authors of the best literature in Kenya and promote high standards.” And indeed ‘high standards’ are something the affable David Waweru — a publisher and motivational author – would be eager to see in the Kenyan publishing space. Whether he is punching above his weight remains to be seen.