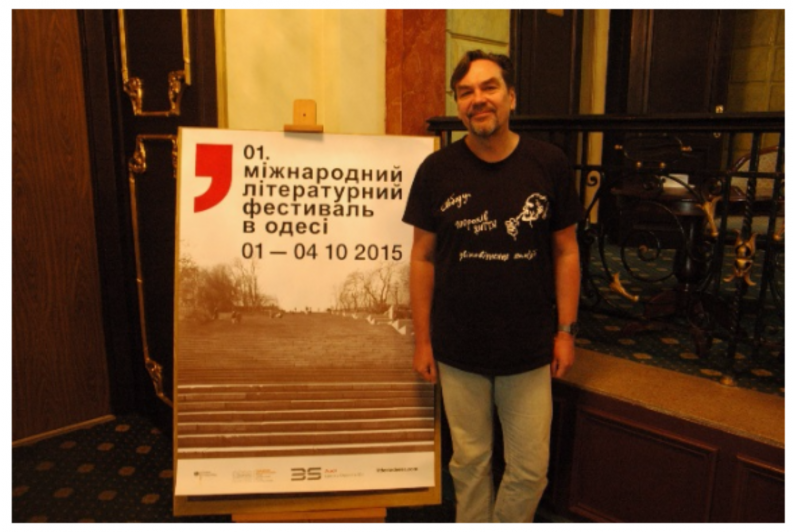 Press gather at the opening of the Odessa Literary Festival

A new literature festival in Odessa on the Black Sea, featuring Ukrainians and Russians together, underscored the role literature plays in civil discourse.

Co-directors Ulrich Schreiber (of the International Literature Festival Berlin) and Hans Ruprecht (Bern Literature Festival) – with support from the German Foreign Office, the Fondation Jan Michalski and others – brought together 24 writers from 17 countries for a series of readings and talks, many of which, of course, dealt with the war in the east of the country and the Russian-backed occupation of the Donbass region. Odessa is a predominantly Russian-speaking city with a small, but active, pro-Russian faction. As elsewhere in the country, tensions run high: just before we arrived, a bomb went off outside the offices of the Ukrainian Security Service in the town centre, allegedly placed by pro-Russian agitators. During the festival a pro-Russian march was held on the Kulikovo Pole square. In the interpretation and programming of the events, equal emphasis was given to the Ukrainian and Russian languages. Yuri Andrukhovych at the Hotel Londonskaya

John Ralston Saul, president of PEN International, and the Russian-language Ukrainian novelist Andrei Kurkov, vice president of Ukrainian PEN, gave addresses at the packed opening ceremony in the Hotel Londonskaya. Odessa has many literary associations: Isaac Babel and Anna Akhmatova were born in the city; Pushkin completed some of Eugene Onegin while in residence and Gogol a section of Dead Souls; Ivan Bunin wrote there; Chekhov and Tolstoy visited. Kurkov later told me he hopes, “a festival like this one can kick-start a revival of Odessa as a literary centre, a position it hasn’t held for a century. Maybe it’ll also invigorate the book market. There are few bookshops here. Kiev and Dnipropetrovsk remain the principal publishing centers, and arguably Lviv has the most vibrant cultural scene.”

On the situation in the east, Kurkov said, “We need to remind Ukrainians of the importance of words, of dialogue – in a militarized atmosphere the true meaning of words gets lost. Real dialogue, if that can happen in such times, could lead the way towards stability. But for stability we will also have to wait for the Kremlin to end support for separatist groups and militias.” Victor Erofeyev in the Literary Museum

Victor Erofeyev, the Russian novelist, told me, “This is a wonderful new festival. A good book is the antidote to propaganda – the writer upholds international values, culture and the idea of freedom.” The Ukrainian-language writer Yuri Andrukhovych added, “People need culture and a space for dialogue in moments of war, when political structures are so dysfunctional. When the shooting stops, culture remains.” There was, on the penultimate evening, a discussion between Mikhail Shishkin and the poet, rock singer and activist Serhiy Zhadan under the title “The Intellectual as an Enemy of the People” in which – in front of a large audience – they explored the possibilities (or otherwise) for the writer to fulfill a civic duty in times of war. The night finished with a poetry reading by Zhadan and a concert by his band. The following morning Shishkin and I met on the Potemkin Steps, made famous by Eisenstein’s silent film Battleship Potemkin. “Russia and Ukraine have a shared history,” he explained, “but Ukraine is trying its best to shake off the militarized patriarchy of our past by building a European-style civil society, from the bottom up. Civil society is weaker in today’s Russia than it was before the Revolution. I came to Odessa out of solidarity with the people of Ukraine. Literature isn’t an entertainment here, as it is in the West – in these times it’s hugely important for international writers to come and remind Ukraine it’s part of a world culture.” Mikhail Shishkin and son on the Potemkin Steps

James Tennant is the Literary Manager, PEN International. He edits PEN International magazine, runs the Publishers Circle imprint, and co-ordinates all publications and literature events, including the international Free the Word! series. James also manages the New Voices Award, the Publishers Circle and the Writers Circle. Outside of PEN he is a commissioning editor for magazines Asymptote and The White Review. He can be reached on Twitter at @js_tennant.