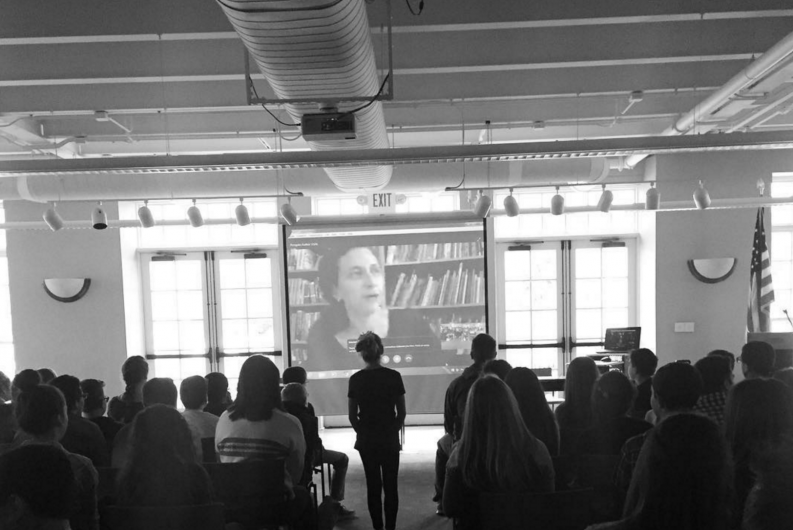 A panel of YA publishing pros discuss the latest trends — including a focus on realism — and the need to sustain direct relationships with readers.

On October 26, the Women’s Media Group gathered for their monthly luncheon, this time at the Upper Story restaurant inside the storied D&D Building (which features floor after floor of home interior design showrooms). WMG, founded in 1973, is comprised of women across different fields of media, from television to film to magazines to digital media to newspapers. Their aim is to be a supportive network for women in the industry. There were a lot of agents in the room, as the theme was “Panel with YA Superstars.”

Moderated by the New York Times’ children’s book editor Maria Russo, the panel included several women who wear different hats in the YA world. There was Mollie Glick, a literary agent who represents Jonathan Evison and Ali Benjamin (her book The Thing About Jellyfish has been shortlisted for a National Book Award); Alyssa Sheinmel, author of several YA titles including Faceless and Second Star; and Julie Strauss-Gabel, an editor at Penguin who’s honed many breakout talents, from John Green and Kat Rosenfield to the children’s debut novels written by bestselling writers John Grisham and Meg Wolitzer.

Maria Russo opened with a question that isn’t terribly unique for the YA publishing set, but it sure gets the party started. “Can we open up with the topic of adult readers of YA?”

“The line between adults and YA lit continues to be fuzzy,” offered Strauss-Gabel, “but editorially, I don’t think about adults at all.”  Agent Glick wasn’t as dismissive of adults, but had this to say: “Adults are picking up the popular YA titles… but they’re not the ones discovering the new books,” she said.

This conversational thread was followed by another familiar head-scratcher. “What’s the new exciting direction in YA?”

In a nutshell, there will always be vampire books for those readers who are committed to vampires. Just as there will continue to be post-apocalyptic and “terminal disease” books.

But the new trend is a style of books that Julie Strauss-Gabel is championing now, and always has been, is contemporary realistic fiction. “There are also a lot of readers interested in a new genre that could be called ‘heightened contemporary,’” she said. Call edgy, call it weird, or call it culled from the adult horror market, these titles are somewhat grotesque in nature. Maybe they’re true stories with a twist, for example, of a girl receiving a new face from a plastic surgery treatment that is still cutting edge. “Also, sci-fi is gaining ground again.”

The other big news floating around the YA planet was when the New York Times decided to drop paperback books from one of their YA lists to create a YA Hardcover list. Seriously, it had become the John Green list, and it begged the question, what motivates people to look at the lists in the first place? Is it to find something new to read? That wasn’t happening. Once the paperback books were dropped, new hardbacks began to gain some curious second glances and illuminate for the industry those titles, other than the Green catalog, that were flying off of the bookstore shelves.

Finally, the conversation veered to another evergreen topic: print vs. ebooks. Here’s the thing—teenagers are reading print. It’s really their book club member moms and grandmas who are reading all of the eBooks. There is a lot of speculation about why this is, from kids being unable to bring their devices to school to read with, to being a little bit fetishist about their favorite authors.  It’s super important, for example, to see which physical books your new college roommates are unpacking when they get there… It says a lot about who they are. Finally, when you have the physical book… you can Instagram the cover …

The upshot of the luncheon? Teenagers are reading! They want access to the writer, and one only need look as far as John Green and his Nerdfighters website to see what an authentic voice can do for building a community of loyal followers and readers. And then there’s Taylor Swift, who was mentioned on the panel. Even if it’s a contrived authentic voice, Swift is the pinnacle of what it means to authentically reach the braces-set. She pushes so far into her life to engage her fans on social media, from showing pictures of herself baking cookies with her BFFs to having fans over for sneak peeks of upcoming projects at slumber parties. Yes, even in her big New York City Tribeca loft.

“We have reached a saturation point, though. We need to reach Kid Zero,” said Strauss-Gabel. What is Kid Zero, I asked my neighbor. She shrugged her shoulders. I interpreted it as simply “Reach kids so that they can spread the word of their favorite books.” Strauss-Gabel herself is personally involved in the endeavor of Kid Zero, having recently conducted an hour-long Skype conversation with one hundred 9th graders (Instagram pic here: https://instagram.com/p/8y_tcxHtWi/). “Kids say they find books from friends.”