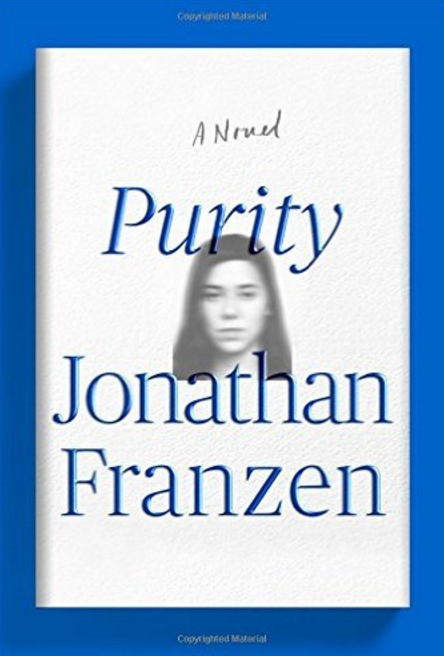 Dennis Abrams writes about how appreciation of the work of Jonathan Franzen has waned, changing over time from enthusiasm to indifference. Let me start with this. I don’t have it in for Jonathan Franzen. I’m a fan. I liked The Twenty-Seventh City a lot. I loved The Corrections.

Then there was Freedom. I enjoyed it a lot while I was reading it, but now…it’s forgettable. Wasn’t there something about birds? About population control?

And with Purity, I couldn’t finish it. Let me be clearer. I could have finished it, I just didn’t care enough about any of it – the plot, the characters, the writing —  to do so.

There. I said it.

And honestly, I hate putting books down.

It’s not that the book is bad per se. I wouldn’t go as far as Gawker, which headlined their review “Jonathan Franzen’s Purity is an Irrelevant Piece of Shit,” but on the other hand, it’s not all that far off the mark either.

Here’s how my reading went:

The first section looks at Pip (aka Purity) and her struggles. She’s in her early twenties, overburdened with student debt, working at a job she doesn’t like, sharing a house with a bunch of Occupy Wall Street types, in love with one of them, dealing with a batty mother, and “recruited” to work for a somewhat mysterious internet leaker (NOT Wikileaks and Julian Assange as we’re told several times). It was decent but not compelling, and Pip herself seems more of a study for a character than actual character.

Still, it was enough to keep me going

The second section though…moves to East Germany and the life story (and off-putting sex life) of the mysterious internet leaker Andreas Wolf up to the fall of the Soviet Union and the Berlin Wall. And here’s where Franzen nearly lost me.

Franzen is a talented writer. No question. But this entire section felt…forced. Fake and contrived. Territory that Franzen wasn’t necessarily comfortable with, and it showed.

And even though neither Pip nor Wolf were particularly interesting (Pip herself is annoying in ways that I find it difficult to believe that Franzen intended) but I persevered. Of course, the question of whether one should need to “persevere” while reading a piece of popular fiction is something else again…

In the next section, Pip, now interning for Wolf’s “Sunshine Project” is flown to Bolivia (with the promise of relief for her student loans and help in finding her long-lost father) where she meets the American journalist Leila and yes…Wolf, with whom she has a bantering/flirtatious/quasi sexual relationship that just made me uncomfortable (again, in ways I don’t think Franzen intended).

At this point I almost quit, but decided to go for one more section, which turned out to easily the best I’d read.

Back in America, it’s about the romantic triangle between Leila, her author-husband Charles, and her editor and soon-to-be lover, Tom. Finally, we as readers can breathe an internal sigh of relief as Franzen seems to be writing about something he actually knows and cares about.

But all too soon he’s back to Pip and a complicated story of a stolen (although not stolen) nuclear weapon, and drug deaths, and revelations about relationships between characters and…I just couldn’t go on.

And frankly, even with the lack of character interest (with the exception again of the Tom/Leila/Charles triangle, which, unfortunately, is far from the main focus of the book), and a plot that seems to be trying way too hard to be both timely and Dickensian (a nearly impossible feat), if the writing had been strong enough, I would have persevered.

The prose itself was just…there, forgotten as soon as it was read. Except for the more than occasional clunker that made one wonder just what Franzen was possibly thinking.

Example: The opening paragraph: “’Oh, pussycat, I’m so glad to hear your voice,” the girl’s mother said on the telephone. ‘My body is betraying me again. Sometimes I think my life is nothing but one long process of bodily betrayal.’”

Example: Pulitzer-Prize winning journalist is interviewing Phyllisha, who lives in the panhandle town of Pampa and works at a Sonic about her connection to that whole missing nuclear weapon thing, and asks why she stayed with the guy so long. “You stayed with him because you felt guilty?” Leila said. “Kind of! That and free rent and lack of immediate other options.” Given what we’d heard from Phyllisha, “lack of immediate other options” sounded completely off. Enough to throw me at least out of the narrative completely.

Enough. Neither the writing, the characters, the plot, or Franzen’s attempt to seize the zeitgeist (anarchists, student loan, internet journalism, etc.) was enough to keep me going. And I’m willing to admit that maybe it’s just me. Maybe it’s the wrong time for me to be reading it, maybe the voice is wrong for my mood…it could be a dozen or more reasons.

But for now, I’m not finishing it. And I feel good about that.