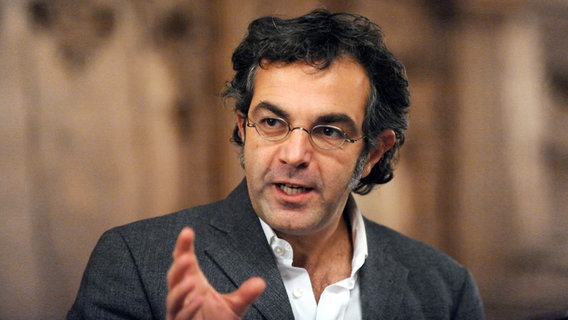 Navid Kermani, whose work explores Islam, the Middle East, and Christian-Muslim dialogue was awarded the 2015 Peace Prize of the German Book Trade.

This past Sunday at the Church of St. Paul in Frankfurt, author and essayist Navid Kermani received the 2015 Peace Prize of the German Book Trade.

The Prize has been awarded by the German Publishers and Booksellers Association on the final day of the Frankfurt Book Fair since 1950. Among the previous recipients of the Peace Prize are Amos Oz, Albert Schweitzer, Astrid Lindgren, Václav Havel, Siegfried Lenz, Susan Sontag, David Grossman, Boualem Sansal, and the recipient of this year’s Nobel Prize for Literature, Svetlana Alexievich. The Prize comes with an award of €25,000.

In his acceptance speech, Navid Kermani called for resolute behavior on the part of Europe with regard to the war in Syria:

“Can the winner of a peace prize call for war? I am not calling for war. I am simply pointing out that there is a war – and that we too, as its close neighbors, must respond to it, possibly by military means, yes, but above all with far more determination than has so far been shown either by diplomats or in civil society … And only when societies no longer accept the madness will our governments make a move. Whatever we do at this point, we will probably make mistakes. But our greatest mistake would be to do nothing or too little against the mass murder being carried out by Islamic State and the Assad regime at Europe’s doorstep …

“Rather, Islam is waging a war against itself, that is to say, the Islamic world is being shaken by an inner conflict whose effects on the political and ethnic cartography would seem to match the dislocations resulting from the First World War.”

Kermani went on to criticize the lack of debate and action among European governments regarding the ongoing crisis:

“Only three hours’ flight from Frankfurt, entire ethnic groups are being exterminated or expelled, girls are being enslaved, many of humanity’s most important cultural monuments are being blown up by barbarians … but we only assemble and stand up when one of the bombs of this war strikes us, as it did on 7 and 8 January in Paris, or when the people fleeing from this war come knocking at our gates.”

He added that while it was exhilarating to see so many people standing up in support of the refugees, that Europe itself remains oddly apolitical:

“We are not having a broad debate in our society about the causes of terror and refugee movement, about how our own policies may even be exacerbating the disaster taking place in front of our borders. We do not ask why our closest partner in the Middle East is Saudi Arabia of all countries. (…) We have not come up with any ways to prevent the murder being committed by the Syrian regime against its own people for the last four years.”

Kermani also spoke about the coexistence of Christianity and Islam, about the religious culture of Islam in history, its originality, its intellectual scope, its aesthetic power and also its great humanity.

Navid Kermani is a Muslim who says: “Any Muslim who does not struggle with it [Islam], does not doubt it and does not question it critically, does not love Islam.”

In his laudatory speech, Norbert Miller focused his attention on Kermani’s literary work, drawing an arc from novelist and Middle East expert to reporter and “beholder of images”. According to Miller’s key message, Kermani’s life itself is a novel: “This act of clinging to the process of writing as a concept of life embodied by the author Kermani – working against finiteness – also comprises in itself all future utterances. They are all, to this day, part of a roman à faire.”

Heinrich Riethmüller, President of the Börsenverein noted: “Our world needs role models; people who provide us with orientation, who show that it is worth it to get involved and stand up for each other. People who prove that peace and freedom can only succeed (…) if we become actively involved and if we are prepared to stand up for freedom against any of its internal and external enemies. For all of us on the Board of Trustees of the Peace Prize of the German Book Trade, Navid Kermani is such a man. He is an enlightened citizen, one who loves Hölderlin and poetry, and who draws from literature and his own religiosity the inspiration, insight and strength we all need in light of a world that has seemingly come apart at the seams.”