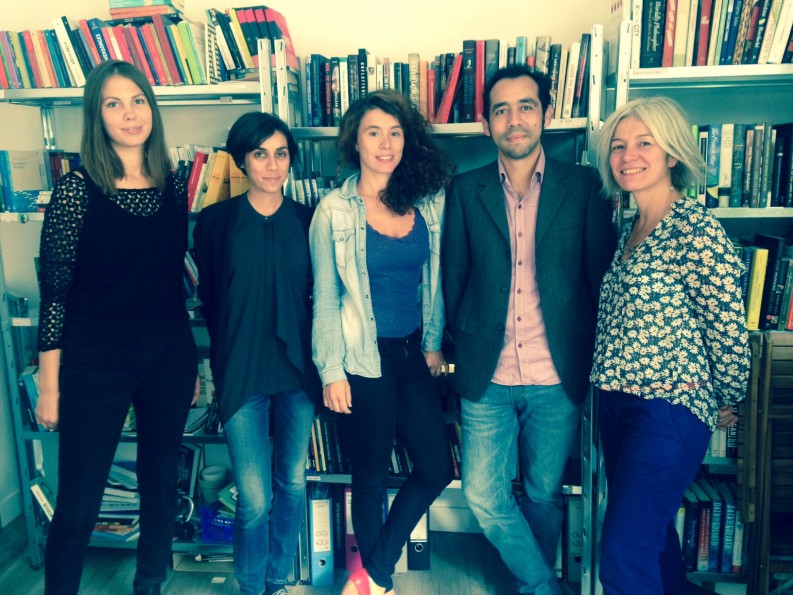 Marie Lannurien, standing in the middle, and Corinne Marotte, at the far right.

In France, agenting is considered a bit “dirty,” but through outreach to the industry and good, hard work, Paris-based L’Autre Agence hopes to see that change.

Following a serendipitous meeting between two women, both of whom worked as co-agents and in foreign rights at publishing companies, Corinne Marotte and Marie Lannurien founded l’Autre Agence (The Other Agency) in Paris in 2009.

It joined the ranks of a handful of traditional sub- or co-agents operating in France mostly representing U.S., British, and Canadian agents and publishers for the sale of French translation rights, such as the Michelle Lapautre agency, where Marotte cut her teeth working in non-fiction.

But the driving force behind L’Autre Agence (the name can lead to some comical misunderstandings when you’re talking about agencies) is far from traditional, and Marotte and Lannurien are intent on actively participating in the creeping evolution of agenting in France.

For the moment, the agency exists as a sub-agent, selling fiction and nonfiction foreign rights for small, high-quality, independent French and Québécois publishers such as Tallandier, Philippe Rey, Alma, or La Peuplade and as co-agents for foreign publishing companies and literary agencies. L’Autre Agence’s foreign roster is impressive, representing publishers in the US such as Farrar, Straus and Giroux, Little, Brown & Co, or Picador and university presses including Harvard, Princeton and the University of Chicago. It also represents publishers and agencies from Australia, Europe, Turkey and South America.

Marotte and Lannurien began their agency with high hopes and continue to believe that they are at the forefront of a movement: “We like to be on the cusp of something that is evolving,” said Marotte, “we are participating in the construction of something.”

But Marotte also admits that their dreams were not entirely aligned with reality.

“The métier as agent is not understood in France,” said Marotte. “In the short term, I don’t think things will change much. Publishers still aren’t open to agents, and you can’t really live from agenting unless you have a bestseller. You also have to educate authors. It’s the French relationship to service. We don’t like intermediaries.”

Lannurien added, “Here in France we are lagging behind Spain, Italy, Germany and many other countries. Being an agent is considered a bit dirty.”

At the same time, said Lannurien, the younger generation is more open to agents as are smaller, independent publishers. And since 2009 Marotte and Lannurien have had time to pick up on these subtle changes during an event held several times a year that they launched and named Carpe Diem. The well-attended Carpe Diem (now in its 23rd incarnation) is an open invitation to anyone in the publishing industry to meet informally, a Gallic Frankfurter Hof of sorts.

“We are very pleased Carpe Diem has become successful. Marie’s contacts were younger people and mine a slightly older crowd,” said Marotte. “It’s the first time something like this has been done, in France everyone usually stays in their corner.”

In the near future Marotte and Lannurien see L’Autre Agence as a flagship that can provide services à la carte, such as legal assistance, or PR and events. For the moment L’Autre Agence represents one author, but intends to develop this side of the business. Marotte also hopes to foster a more collective spirit among agents, holding discussions about common problems, for example.

L’Autre Agence is located in a co-working space called the Fontaine O Livres, financed by the city of Paris, with the goal of supporting and promoting book related activities. Marotte and Lannurien have taken on three additional agents, from Sweden, Italy and Columbia, all of whom will focus on promoting and selling rights for their French houses — including Thomas Piketty’s 2012 book, Peut-on sauver l’Europe (Can Europe be saved?) published by Les Liens qui Libèrent. Marotte and Lannurien will meet with their international clients and continue to develop their agency in a way that “reflects who we are,” said Marotte.