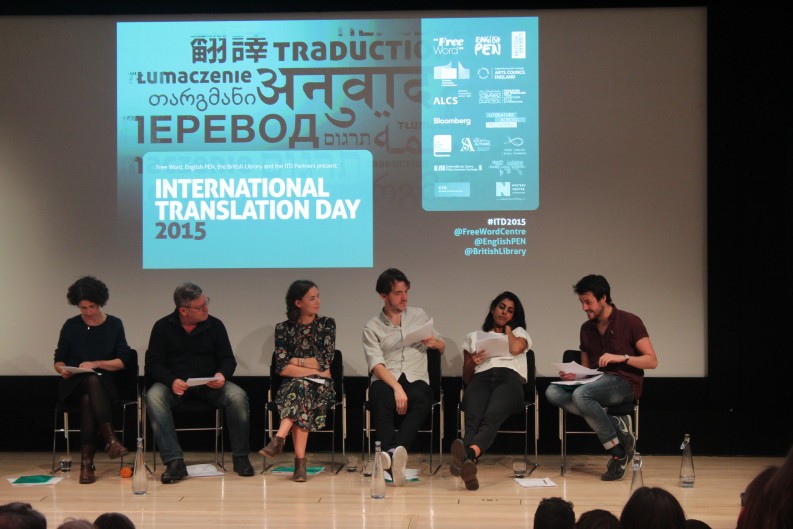 The “From Page to Stage” reading and theater translation panel at International Translation Day. From the left: Sasha Dugdale, translator, Chris Campbell, literary manager at the Royal Court, and actors.

International Translation Day, an annual conference in London, has become a lodestone for the translation community to gather, talk shop and get inspired.

Saint Jerome, the patron saint of translators, seems to have been smiling on the translation community of late. Every where you turn, there seems to be a translated book making headlines or peppering social media feeds. On October 2, Publishing Perspectives headed down to International Translation Day (ITD), an annual conference held at the British Library in London, two days after the saint’s feast day, to get a sense of the behind the scenes work that has helped make translated literature more visible and buzz-worthy in the UK.

This year’s sold-out event, presented by the Free Word, English PEN and the British Library in association with the British Centre for Literary Translation, Literature Across Frontiers, the Translators’ Association, Wales Literature Exchange and Words Without Borders, drew guests from the UK and beyond for panel discussion and seminars, as well as ample social time. Rose Fenton, director of the Free Word Centre, says the event, founded in 2010, sprung from “an idea to bring the community together—translators, booksellers, publishers—in a way, to dismantle the barriers to reading literature in translation.” During conversations with Fenton and Samantha Schnee (founding editor and chairman of the board of Word Without Borders, who also sits on the board of trustees at PEN) it became clear just how inter-connected the swell of activity around translation in the UK has been to initiatives supported by the consortium presenting ITD. Take for example the Free Word’s Translator in Residence Program (which began in 2011), during which 2012 translator-in-residence Rosalind Harvey created the Emerging Translator’s Network, a forum for emerging translators to share knowledge about the art and business of translation.

Jonathan Ruppin, Foyles’ web editor and a member of English PEN’s Writers in Translation committee, launched the English PEN Translated Literature Book Club in July 2015. There is currently a waiting list to join their monthly meetings at The Free Word Centre, but anyone can join the Facebook group, which Ruppin hopes to become a community hub for world literature in general.

Not to forget the Harvill Secker Young Translators’ Prize, now in its sixth year. The prize was awarded at the Free Word Center on October 3 to Tuesday Bhambry. Along with the British Center for Literary Translation’s Summer School and Emerging Translator Mentorship Program, the prize is yet another example of the the work that has been going into nurturing the next generation of translators and stoking general interest in literature from around the world.

The success of these programs seems to hinge on a community of cooperation. Fenton describes a constant process of assessment of the community’s activities, with each organization bringing their expertise to the table. Fenton says that after ITD, they ask, “How should we be thinking about the next gathering? […] The next gathering is usually at the Literary Translation Center at the London Book Fair, which has often has a lot of the same people on the advisory group. And then we debrief after London Book Fair. It’s an iterative process: We have our ears to the ground about what’s going on across literary translation, and the topics people wish to excavate further. [ITD’s] opening panel usually addresses challenges and successes of the year before.”

This includes examining reports such as English PEN’s Taking Flight: New Thinking on World Writing, which was launched at the 2011 ITD event, and Literature Across Frontiers’ Three Percent? Publishing Data and Statistics on Translated Literature in the United Kingdom and Ireland (2013) in order to look at strategies needed for funders, educators, and beyond to continue building momentum around translated literature.

“Last year we were looking at education initiatives: training and professional development. Since the first ITD, there has been a huge number of initiatives, such as training translators to work in schools,” Fenton said. “The idea [behind the Translator in Residence program] is that you are a translator, but you need other skills to survive. You come to the Free Word as an ambassador for translation and the culture from which you’re translating. You get training to work in schools.” He also mentioned the Stephen Spender Trust’s Translators in Schools program. The question at the core of these programs seems to be “Beyond spreading the word about great stories and the people who bring them to us, what value can we add to society?”

This approach seems to be working. Sarah Hesketh, the project manager for ITD observed that in the UK “translated literature does feel far more visible now than when we first started the event. I think the sector as a whole has worked very hard to raise the profile of translators and their work, and I think it is paying dividends […] I think ITD has been one of the crucial events to facilitate that. We think of ITD and the Literary Translation Centre at London Book Fair as sister events. An idea that begins at one, can often find fruition or more detailed discussion at the other. It has allowed for some long term strategies and consistent planning to develop.”