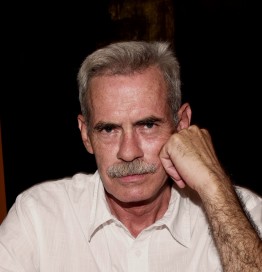 John McGlynn of the Lontar Foundation discusses the decade-long journey Indonesia took to becoming the 2015 Guest of Honor at the Frankfurt Book Fair. At Inside Indonesia, Petia Dimitrova spoke with John H. McGlynn, an American whose name has become synonymous with Indonesian literature and publishing.

McGlynn, who went traveled to Indonesia in 1976 to “learn the art of shadow puppetry,” went a different route after learning the language – first as translator and then as a publisher of Indonesian literature in translation.

He is the co-founder and current chairman of the Lontar Foundation, “the only organization in the world whose primary focus is the promotion of Indonesia through literary translations.”

Among other topics, McGlynn spoke with Dimitrova about this year’s Frankfurt Book Fair.

How was Indonesia chosen to be a Guest of Honour at the Frankfurt Book Fair?

“The process was a long one. More than a decade ago the Indonesian Publishers Association (IKAPI) discussed the idea of proposing the countries of ASEAN as Guest of Honour (GoH) but this idea came to nought. (The GoH is sometimes not just one country; in 2016, for instance, the GoH will be the Netherlands and Flanders, the Dutch-speaking region of Belgium.) A number of years later, IKAPI proposed the “Malay World” – Indonesia, Singapore, Malaysia and other areas where Malay is spoken – but the Frankfurt Book Fair (FBF) declined. Finally, in 2011, Claudia Kaiser, Vice President of the Fair made a visit to Indonesia. She met with people from IKAPI and, because of my work in the field of Indonesian literature, contacted me as well. Thereafter, having decided for various reasons that Indonesia would be good choice as GoH, she asked IKAPI to submit a formal proposal in Indonesia’s name alone.

“Following this step, Juergen Boos, president of FBF, made a visit to Indonesia. IKAPI, as the point contact, arranged several meetings at prominent publishing houses but Lontar arranged another event, this one specifically for authors, at the Salihara Cultural Centre, which was founded by Goenawan Mohamad, one of the country’s most influential writers (and, coincidentally, one of Lontar’s founders as well). About 25 Indonesian writers attended and, after interacting with these authors, Mr Boos became convinced that Indonesia had no shortage of talented authors. ‘Indonesia is a good choice as Guest of Honour,’ he confirmed. Goenawan, who had been somewhat skeptical of the idea before this time, also changed his mind when coming to realise the potential that a successful Indonesian program at FBF would have for enhancing international recognition of Indonesian literature.”

Has the process [of preparing for Frankfurt] been a smooth one? What has been achieved?

“Preparation for FBF-2015 has very much been a ‘learning process’ for almost all Indonesian parties concerned. Never before has Indonesia been involved in such a large-scale publishing-related event and, at the outset, too little authority was given by the Ministry to professionals in the book publishing industry. As a result, much valuable time was lost.

“As both a translator and a publisher, I am extremely pleased that the Ministry established a translation funding program – called I-LIT, which is short for Indonesian Literature in Translation – but this program was only announced in March 2014, 18 months before Indonesia’s ‘coming out’ party at Frankfurt. The program should have been started as soon as possible after the signing of the memorandum of understanding (MOU) between FBF and the Ministry. Unfortunately, there seems to be a commonly held assumption that translation, even literary translation, is easy, that anyone who can speak two languages can also translate.

“The Ministry set for itself a target of having 200 titles translated into German before October 2015, but with the limited time available and the dearth of professional Indonesian-to-German translators this is unlikely to be achieved. Even the number of Indonesian-to-English translators is small. Over the years, I have worked with more than 200 translators and I can truthfully say that I rely on less than a dozen to produce literary-quality translations.

“Because of this situation, the initial target is likely to be revised downward. But, in my opinion, that is not a bad thing. I believe it is far better to produce, for example, 50 well-translated books of high literary quality than 200 badly translated titles that no-one will ever read. The whole point of the GoH program is to attract favorable international attention to the Guest of Honour’s literature. Poor quality translations would nix this goal. Also, to make a true impact abroad, it is essential to engage the participation of foreign publishers, but this is something that cannot be easily done, not with the current lack of knowledge about Indonesia abroad.”