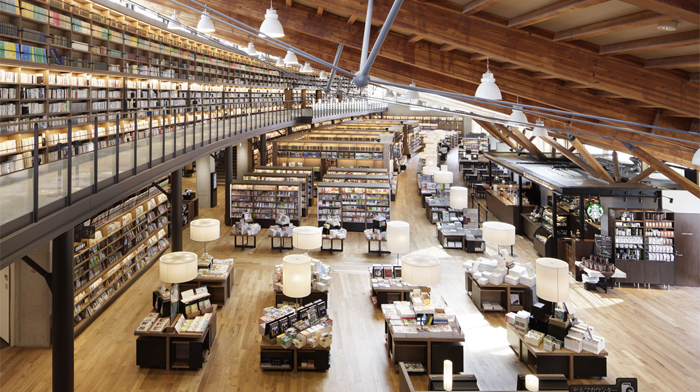 Takeo City Library is nothing if not stunning, but the books leave something to be desired.

When Tsutaya Bookstores partnered with the City of Takeo Library, the result was a stunning building that the librarians only enough money to stock it with cast off books.

TOKYO: A local public library in the southern island of Kyushu teamed up with a large bookstore chain to spruce up a branch, and it seems the efforts have backfired.

When the city of Takeo (population: 50,000) in Saga Prefecture announced three years ago that it nominated as a private sector partner Tsutaya Bookstores, known for its sleek, beautiful bookstore complex in the trendy neighborhood of Daikanyama, Tokyo, and video/DVD rental shops with 1,500 locations nationwide, people took notice.

The original plan was to expand the library’s collection to 200,000 titles, open 24/7, with a Tsutaya video/book store and a Starbucks cafe within the facility. When it reopened in April 2013, curious library goers and the press flocked to the new branch to the tune of 920,000 visitors and spent 2 billion yen in the inaugural year, the city boasted.

In a recession economy, Japanese libraries have seen their budgets and services slashed over the years, and it’s not rare that some of the institutions turned to private companies and non-profit organizations for support since the 2003 deregulation in which public libraries are allowed to nominate outside partners for renovation and maintenance. Takeo/Tsutaya case was groundbreaking because Tsutaya had no previous experience with libraries, but plenty of commercial data savvy and a customer reward program called T points.

When the new Takeo Library opened, it wowed the crowd with the ceiling-high bookshelves gleaming in plenty of natural light. Once the visitors looked at what’s on those shelves, however, the collection of supposedly newly purchased books contained some unlikely selections for a local library, such as a ramen shop guide in a faraway city of Saitama, or out-of-date CPA study guides.

After a relentless public demand for the detailed information on the title selection process, Takeo local government authorities revealed that the towering bookshelves required additional structural support to withstand possible future earthquakes (which, as you’ve heard, a common occurrence in this volcanic archipelago island nation), for which the budget for book purchase was cut, and evidently 10,000 titles were supplied by NetOff, an online used book service Tsutaya’s parent company once held a 30% stake.

With criticisms growing, Tsutaya’s parent company CCC (Cultural Convenience Club) released a statement admitting that some of the titles have never been in circulation at Takeo Library and CCC provided more titles at no additional cost.

Saga Shimbun, a local newspaper, reports that a group of concerned citizens have filed a lawsuit against the city seeking to recover 180,000,000 yen in taxpayer’s money spent on the project. Meanwhile, former Takeo mayor Keisuke Hiwatashi, who originally pushed for the Tsutaya alliance, quit mid-term last December to run for Saga gubernatorial election and lost. He is now CEO of another CCC entity.

Reporter for Huffington Post and author of an investigative non-fiction book titled, “Libraries Connect,” Chika Igaya points out that the ground floor was mostly occupied by a commercial bookstore and a Starbucks cafe, while the library space took the back seat. “It was criticized for being a publicly funded, commercially run splashy book cafe. I don’t necessarily think it’s bad that a library strives to attract as many customers as possible, but then the title selection was amiss and it didn’t bode well.”

Other local governments with a collaborative library project with CCC underway, such as Komaki in Aichi Prefecture, Ebina in Kanagawa, and Tagajo in Miyagi, are either reviewing the project or the residents will be asked vote on the go-ahead in upcoming weeks.

Takao’s mishap could have been avoided with more transparency and oversight, Igaya points out. “We shouldn’t deny the libraries ways to bring economic boost, as long as the libraries don’t lose sight of their mission as a public service provider. Perhaps it’s time that we reevaluate how a public library should operate, including searching new paths for fundraising.”