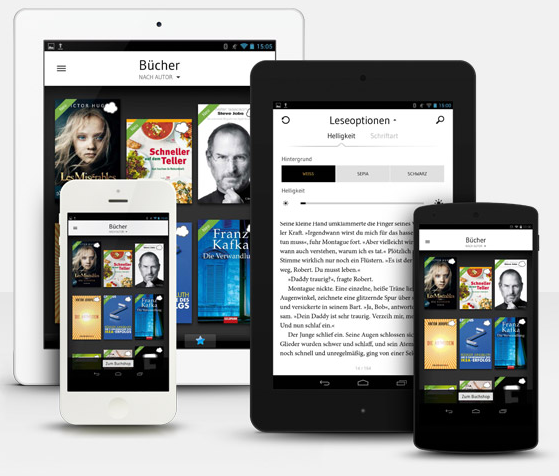 The Mayersche Buchhandlung consists of 40 stores, mostly in the western part of Germany and has an annual turnover of approximately 160 million euros. Osiander has 34 bookstores, mostly in the southern part of Germany, with 500 employees and an annual turnover of 68 million euros. With Osiander and the Mayersche, the Tolino alliance now encompasses around 1,800 brick-and-mortar bookstores in Germany. Bearing in mind that there are roughly 6,000 bookstores across the country, nearly every third bookseller is now part of the Tolino ecosystem. Tolino also has a significant market share of digital books, with nearly 50% of ebook buyers in Germany being Tolino customers, according to Nina Hugendubel, Managing Director of Hugendubel Buchhandlung. These strategically important partnerships help Tolino to gain ever more momentum against Amazon. In the third quarter of 2014, Tolino reportedly held a 44% market share of ebooks sold in Germany over Amazon’s 39%. With Osiander and the Mayersche now in the game, this year’s numbers might be even more in favor of the Tolino Alliance. With Tolino stronger than ever, the future seems bright: “We’re expecting a double-digit rise in ebook sales”, says Michael Busch, managing director of Thalia.

Christian Riethmüller, managing director of Osiander, says: “I’m looking forward to this partnership and to welcoming the Tolino ereader in our bookstores. I think the Tolino ecosystem is a definite advantage for our customers that will help them enjoy digital reading even more.”