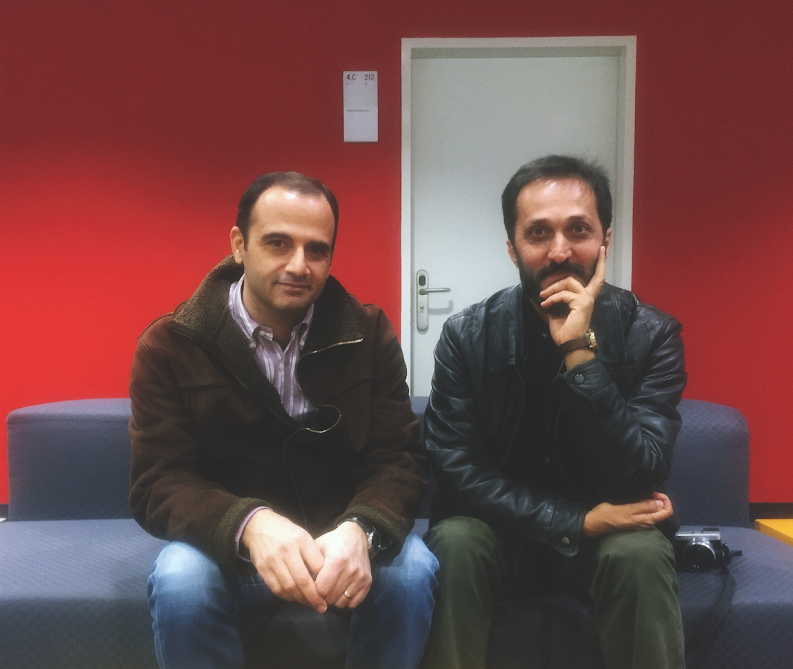 While Salman Rushdie was speaking at the opening press conference, Iranian publishers were making alternative arrangements to hold their meetings here in Frankfurt.

The press conference for the 2015 Book Fair opened Tuesday under high security as author Salman Rushdie arrived to speak about freedom of speech. His presence at the Fair coincides with the publication of his latest novel, Two Years, Eight Months and Twenty-Eight Nights. Last week, the Iranian Ministry of Culture decided to cancel its national stand in protest at Rushdie’s appearance.

“We very much regret the Iranian Ministry of Culture’s cancellation”, said Juergen Boos, Director of the Frankfurt Book Fair. “The Frankfurt Book Fair is a place of dialogue. At the same time, we hope that this year’s cancellation is just a brief interruption in the existing conversations and that we can continue to expand on the established relationships. Nevertheless, for us, freedom of expression is non-negotiable. We must not forget that Rushdie is still being threatened with death for his work.”

In 1989, Ayatollah Khomeini, then Iran’s supreme leader, issued a fatwa calling for Rushdie’s death following the publication of his book, The Satanic Verses, which was considered to be blasphemous. That same year, the Frankfurt Book Fair decided to ban Iran until the fatwa was lifted — the Book Fair’s boycott unfortunately did not alter Rushdie’s situation, and Khomeini died without lifting the edict. In 1991, the Book Fair decided to re-admit Iran, and last year, 282 Iranian publishers came to Frankfurt displaying more than 1,200 titles.
Rushdie began his talk by saying that he had always thought the battle for freedom of speech had been won several hundred years ago in the West, and that the fact that “we have to go on fighting this battle is the result of a more recent, regrettable phenomenon.”

Freedom of speech is not only under the threat of violence, he said, but political correctness can also be a danger. Rushdie cited as an example the idea of putting “trigger warnings” on books of literature for students in the U.S. in order to signal distressing material.

Freedom of expression is a universal right, he said. “You look into human nature to see what human beings have in common. Expression and speech is fundamental to all human beings. We express ourselves through language and speech. We are a storytelling animal. Some of these stories are true; some are made up. You can see human life, itself an uncompleted narrative, surrounded by concentric circles of narrative. All these narratives are things we live within, and through these stories we understand ourselves.”

Limiting freedom of expression is not just censorship, said Rushdie, but also an “assault on human nature. It seems to me that it is not specific to one culture.”

What has changed, said Rushdie, is that “the realist novel was built on the idea that writers and readers shared the same idea of the world.” Today this is no longer true. “There are competing narratives, incompatible narratives fighting for the same space. Writers can no longer assume that there is uncontested realism. Fiction is the narrative that contests the world — it may be a weak narrative, but it is the grandest narrative of all because we put ourselves into question, we challenge ourselves … what people fear about art is that nobody owns it. It doesn’t belong to a political or religious affiliation. It is a single voice saying, ‘I see it like this, what do you think?’ It becomes dangerous to people who want to control the narrative.”

Rushdie said that the reason he was at Frankfurt today was thanks to the writers during the Enlightenment in France during the 18th century. “The point about freedom of expression is that it is universal … this is the one thing we must defend because without this freedom all other freedoms fail.”

Rushdie did not take questions and immediately left the fair following his speech. Meanwhile, the several hundred publishers from Iran who had spent months preparing their trip to Frankfurt were left wondering “now what?”

On Wednesday, the Iranian national stand in Hall 4.0 was being set up as usual although no books were visible. Various Iranian publishers, both independent and government-affiliated, circled around the official from the Ministry of Culture, Mohsen Amoushahi, who declined to answer questions.

“I don’t agree with the Ministry of Culture’s decision,” said Mahmoud Reza Bahmanpour, Managing Director of the independent Nazar Art Publications, who arrived in Frankfurt on Monday with his distribution manager, Hadi Taghavi.

“They could have closed for just one day to protest Rushdie’s presence, for example.”

Frankfurt is very important to Bahmanpour, who buys rights and organizes distribution of his publications by Idea Books. He and Taghavi have re-organized their schedules at the last minute and will be meeting with publishers at their various stands but out of precaution will not set up their own stand.

“There was no official information so we are in a dilemma about what to do,” he added, suggesting that it was not worth the risk go against the official boycott.

Goreishi added, “We would like to say, as academic publishers, we have to attend the Book Fair and other international events and have a dialogue, without dialogue. We cannot have a good relationship between Iranian people and the world, as well as international publishers.”

According to an Iranian publisher who preferred to remain anonymous, the majority of Iranian publishers asked the Ministry of Culture not to cancel their presence at the Book Fair. “Certain radical elements put pressure on the Ministry of Culture. They felt they had to do something and made a hasty decision at the last minute because certain people had made a mountain out of molehill. We would just like to do our jobs. Now Rushdie is gone, and maybe something will change,” he said hopefully.