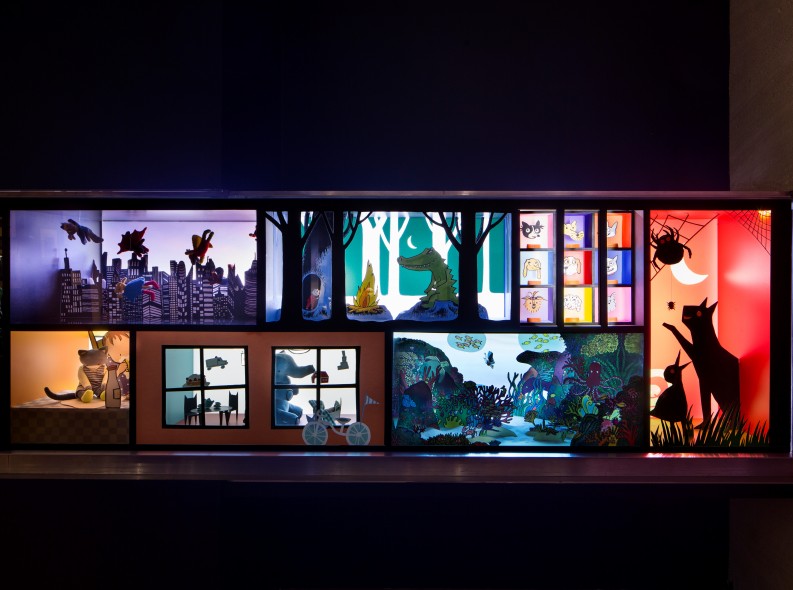 L’école des loisirs, the jewel in the crown of children’s publishing in France has been celebrating its 50th birthday over the past year. October 1st, an exhibition at the Musée des Arts Décoratifs opened (running until February 2016) which does a great job at showing the creative process involved in making illustrated books as well as introducing the public to some of the publisher’s iconic characters.

Hosted by the toy department of the museum, which in the past has exhibited modern to contemporary toys including a yoyo by Sonia Delaunay or a pull-along dog by Keith Haring, the show opens with series of display boxes by four l’école des loisirs author/illustrators, Jeanne Ashbé, Stephanie Blake, Kimiko, and Dorothée de Monfreid. Each box draws the viewer into an enchanted universe in which the characters are larger than life, even if they are no bigger than a couple of inches. L’école des loisirs’ first author, 84-year-old Tomi Ungerer—who recently participated in a ceremony in which the publisher’s co-founder, Jean Delas, received the Légion d’honneur—created an animated, moving installation for the exhibit on the subject of his classic The Three Robbers book. Other displays include a large, interactive machine invented by author Claude Ponti starring his character Blaise, a bright yellow chick who wears a slightly frightening red mask, drawings of children’s toys—a rocking horse, a black panther—by eight artists, and three carousels with characters from l’école des loisirs books. A reflection of the publishing company, the exhibit is small and concise and packed with creativity and big ideas.