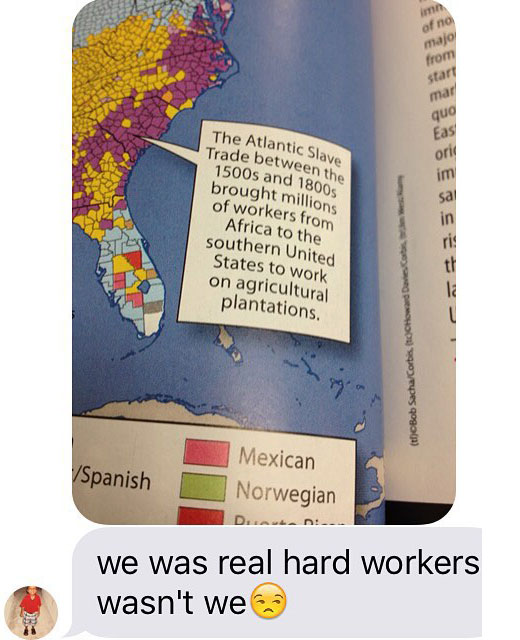 A Texas textbook published by McGraw-Hill described US slaves as “workers,” prompting massive protests on social media and promise of a change.

It’s a story that has made headlines.

As the New York Times reported, 15-year-old Coby Burren, a high school freshman at Texas’ Pearland High School, was reading his World Geography textbook when a map of the U.S. “caught his attention.” There, on page 126, a section about immigration contained a caption that described Africans “brought to American plantations between the 1500s and 1800s as ‘workers’ rather than slaves.”

He texted his mother, Roni Dean-Burren a photograph of the caption along with the message: “we was real hard workers, wasn’t we.” “Their outrage over the textbook’s handling of the nation’s history of African-American slavery — another page referred to Europeans coming to America as “indentured servants” but did not describe Africans the same way — touched off a social-media storm that led the book’s publisher, McGraw-Hill Education, to vow to change the wording and the school’s teachers to use other materials in the class.”

Ms. Dean-Burren told the Times, “It talked about the U.S.A. being a country of immigration, but mentioning the slave trade in terms of immigration was just off. It’s that nuance of language. This is what erasure looks like.”

Of course, Texas textbooks have long been a “source of controversy”: not only it is one of the nation’s largest buyer of textbooks, but it’s state Board of Education has long tried to put a conservative stamp on history and economic textbooks, “emphasizing Republican political achievements and political movements.

Kathy Miller, president of the Texas Freedom Network told the Times that it’s no accident that this incident took place in Texas. “We have a textbook adoption process that is so politicized and so flawed that it’s almost become a punch line for comedians.”

The Times reported that:

“In a section of the book describing America as a nation of immigrants and called “Patterns of Immigration,” the text with a map of the United States reads: “The Atlantic Slave Trade between the 1500s and 1800s brought millions of workers from Africa to the southern United States to work on agricultural plantations.” The authors, on the page next to the map, wrote of “an influx of English and other European peoples, many of whom came as indentured servants to work for little or no pay,” but made no mention of how Africans came to the country.”

Following the storm on social media, McGraw-Hill Education issued a statement on its Facebook page, announcing that it would change the caption in both the digital and print versions to “describe the arrival of African slaves in the U.S. as ‘a forced migration.’”

David Levin, president and chief executive of McGraw-Hill Education, issued an apology in a memo to its employees, calling the caption “a mistake.”

“We are deeply sorry that the caption was written this way,” Mr. Levin wrote to employees. “While the book was reviewed by many people inside and outside the company, and was made available for public review, no one raised concerns about the caption. Yet, clearly, something went wrong, and we must and will do better.”

As for now, with more than 100,000 copies of the textbooks being used in Texas schools, Mr. Levin said that McGraw-Hill Education was in communication with local districts, offering to either replace the textbook, provide “a sticker with the rewritten caption to cover up the old one,” or supply a free lesson plan to teachers on cultural sensitivity “to create an opportunity for a richer dialogue.”