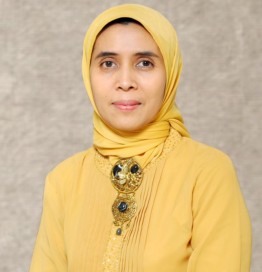 Sari Meutia is CEO of Mizan Publishing, one the largest publishing houses in Indonesia responsible for putting out some 600 titles per year. The company offers a range of fiction, health, business, children’s, reference, religious and general nonfiction books. It is the Indonesian publisher of such international bestsellers as J.K. Rowling’s The Casual Vacancy (2012), Dan Brown’s Inferno (2013), and Harper Lee’s Go Set A Watchman (2015), and the country’s dominant publisher of children’s books

Founded in 1983 — originally, to showcase the works of Muslim thinkers — Mizan didn’t begin trading internationally until 2005.” The content we sold predominantly were Muslim children’s and religious books, starting with our neighbor Malaysia,” says Meutia, “but we began to see the opportunities in 2012 when we saw the market grow to other regions, including Australia, Pakistan and Turkey.”

Sari Meutia is one of seven market “players” representing Indonesia at The Markets: Global Publishing Summit at the Frankfurt Book Fair on October 13, 2015.

Today, her ambition is to find new markets abroad for the company’s range of Muslim children’s books. “There are many areas where the population of Muslims is growing but where it is not easy to find high-quality, popular titles. This is an opportunity for us, and we are developing more elaborate children content that we would like to sell to European and American markets. China is also another country to which we would like to expand.”

Much like in Brazil, where the vast geography of the country and limited bookstore infrastructures makes sales and distribution difficult, Indonesia — which is spread over an archipelago of more than ten thousand islands — faces similar challenges. “While Mizan Publishing focuses on retail products sold through chain bookstores, Pelangi Mizan publishes reference and educational books in the form of multi-set packages and markets through direct selling,” says Meutia — and it is an area that is growing significantly. “In 2012, we had only 200 people working on direct selling. Now, surprisingly, we have almost 5,000, mostly mothers with young children who work from home and do online marketing. Sales has increased four times since 2012, and one individual can earn up to $5,000 a month if they are successful.”

She notes that for foreigners looking to trade with Indonesia, they should understand that Indonesians are price sensitive but also well-connected to the world and eager to follow the latest trends. For those looking to sell into Indonesia, the key is to be sure to introduce content that is truly relevant to the market and to “recognize the boundaries and local sensitivities of the culture.”