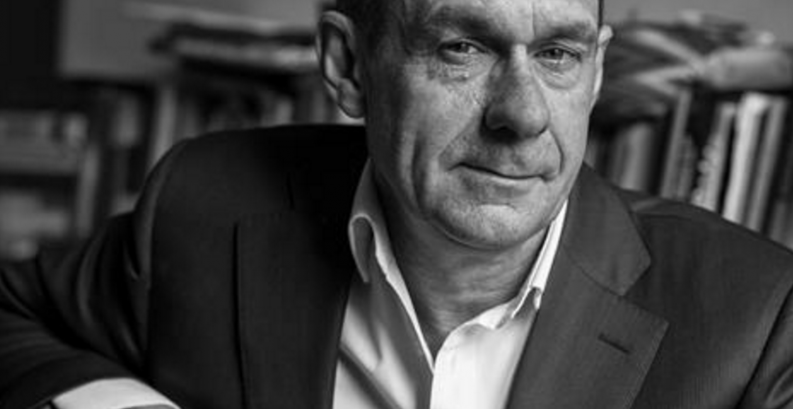 UK author and broadcaster Paul Mason sees the future as a place where the value of work is reduced to zero, but ideas — and their proliferation — still hold sway.

“I don’t think publishing has mastered digital,” laughs journalist — or prophet — Paul Mason, author of Postcapitalism: A Guide to our Future, responding to the thought that publishing has entered a post-digital age, as some at the fair will be claiming. “The digital world is in a permanent revolution and all they have mastered is how to produce digital files that approximate to what a book used to do.

“The reproduction cost of an information file — whether an ebook, the design of an airliner, or NASA’s model of the earth’s climate — is close to zero. And only the monopolization of information and aggressive imposition of IP law is now stopping the price of information falling to zero. When it does the relationship between information and ownership, work and wages that has underpinned capitalism will be over.

“We’re going through a 500-year change similar to what happened intellectually and economically during the 16th century [when the Frankfurt Book Fair was founded, after Gutenberg’s introduction of movable type in the 15th century]. And what Postcapitalism says is: bring it on.”

However, Mason is optimistic that such a redistribution of knowledge will not lead to over a century of years of conflict that Gutenburg’s printing press led to. “It was a very violent time. I don’t think ours has to be. I certainly think knowledge can redistribute itself without violence.” If you haven’t heard of him already, award winning journalist Paul Mason is the economics editor of Channel 4 News in the UK, a prestigious hour-long news program shown most nights of the week in the UK; a columnist for The Guardian; and author of several books including Meltdown: The End of the Age of Greed, the groundbreaking Why It’s Kicking Off Everywhere, and now Postcapitalism published by Allen Lane, part of Penguin Random House, which he wrote amidst getting hit in the head by a CS gas canister in Gezi Park, Istanbul, and reporting on the Gaza war and from the periphery of the Ukraine crisis. He has also published a novel and has another in the works.

Mason would have loved to shared some of Postcapitalism in an open source — collaborative style, but went for “a traditional book because all my previous books have been guerrilla-marketed by brilliant but ultimately small Verso. With something like this — a genre-defying ideas book — you need a major book publishing house, with all the penalties that imposes on versatile routes to the audience (people are flaying me on Twitter because the US publication date is later, and with a different publisher).”

“Postcapitalism” is a term that pre-dates Mason’s attempt at reinventing Marxism for the digital era, and usually refers to the proposed new economic systems that might follow the end of capitalism. And ever since the end of the dot com boom Mason has been grappling with the problem of what is going to happen to capitalism as the silicon chip and the Internet of Things lead to the rise of machines that can reproduce things more or less for free, and to the growing rejection of private ownership in favor of shared ownership models and the networked individual.

“Postcapitalism is the result,” he says. “It’s not a work of economics but of political economy, and it strays into autobiography and social history. It is angrier than most books on economics, as being a frontline reporter puts you at the ‘edge places’ of global order and it’s hard not to pick up people’s anger and frustration.”

While this anger and frustration might seem far away from the hustle and bustle of the trade halls and packed cafés of the Frankfurt Book Fair, Mason thinks this sense of prosperity and growth is a mirage — dig deeper and capitalism is dying, its golden age long gone.

“There’s about fifty years of global growth left, and it’s there in the OECD projections,” he says. “The problem is that we’re living through a technological revolution that is making very little impact on productivity because every revolution in productivity — DNA sequencing, for example, is falling in price faster than computing power — is being offset by the creation of thousands of bullshit jobs like in McDonalds, Starbucks or Gaps that don’t need to exist. There are better things for millions of educated people to be doing with their hands and brain.”

In a perhaps disturbing echo of past revolutionaries, Mason thinks the prize of this revolution is the postcapitalist human — the result of reducing the cost of things to zero, the shared economy and the networked individual (and perhaps even a universal basic income to break the link between work and wages). “Once you free people from economic necessity,” he claims, “their humanity throws off the shackles of what work, discipline and hierarchy imposed on them.”

And if you think he is arguing that Silicon Valley has inadvertently reinvented socialism — he is.

For Mason, this isn’t just wishful thinking: the revolution has already started but we might just have not noticed it. “Now the revolution against the system is already taking place mentally: large swathes of people are switched off, alienated by the pretend morality of the elite, and live a life as mentally rebellious as the vernacular printed Bible readers did in the 15th century.

Mason hopes that this revolution won’t be violent, but believes we have not taken on board how violent the spread of our current form of neoliberal capitalism has been over the last thirty years, with its dogmas of privatization, deregulation and the shrinking state. “This period which began in 1989 has seen nothing but wars and social conflict. For a model that heralded itself as friction-free, it has produced nothing but friction; for a model that proclaimed the end of history it has produced nothing but ‘history’ — genocides, torture, human rights violations, and an utterly cynical and detached elite.”

It’s no coincidence, he thinks, that we are all obsessed with fantasy, other-world dramas like Game of Thrones.

In the end while Mason sees the traditional media as being run by a selected cade of elite decision makers dedicated to making people even more deluded about the reality of capitalism then they already are, publishing  gets off lightly as “books are are the global library of ideas.”

As to whether the Frankfurt Book Fair will survive another 500 years — he is rather doubtful.

“The 500-year projection is that human beings will find new forms of storytelling that will so cut across genres and physical formats that new ‘fairs’ will be devoted to them — and of course, if it’s post-capitalism, we’ll be doing it for love, not money.”