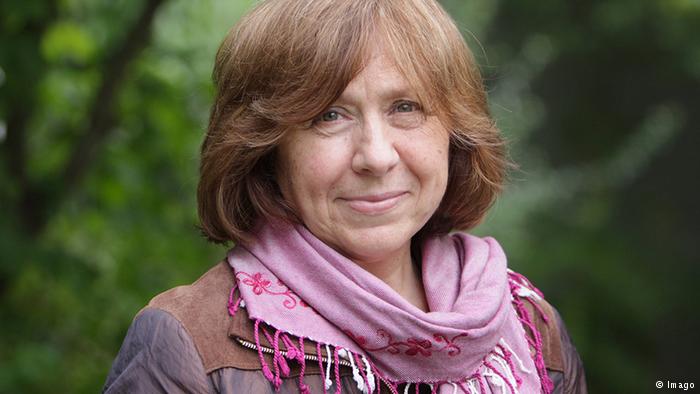 The 2015 Nobel Prize for Literature has been awarded to Belarusian journalist and author Svetlana Alexievich.

The 2015 Nobel Prize for Literature has been awarded to Belarusian journalist and author Svetlana Alexievich, cited by “for her polyphonic writings, a monument to suffering and courage in our time.”

She is the 14th woman to win the prize, and one of the first whose work is primarily nonfiction.

The New York Times quoted Sara Danius, permanent secretary of the Swedish Academy, who said that Ms. Alexievich had “created a history of emotions – a history of the soul, if you wish.”

“She’s devised a new kind of literary genre,” Ms. Danius said, adding, “It’s a true achievement not only in material but also in form.”

Her books “often blend literature and journalism,” and are most famous for “giving voice” to the men and women who “lived through major events” such as the Soviet occupation of Afghanistan in Zinky Boys, the 1986 Chernobyl nuclear disaster in Voices from Chernobyl, as well as World War II in what is perhaps her most critically acclaimed book, 1988’s War’s Unwomanly Face, based on interviews with hundreds of women who took part in the war.

CNN cited Alexiviech’s website, where she said she records conversations with 500 to 700 people for each of her books.

“Real people speak in my books about the main events of the age such as the war, the Chernobyl disaster, and the downfall of a great empire,” she said. “Together they record verbally the history of the country, their common history, while each person puts into words the story of his/her own life.”

What she does not do, she writes, is simply document a history of dry facts and events.

“I’m writing a history of human feelings,” she wrote. “What people thought, understood and remembered during the event. What they believed in or mistrusted, what illusions, hopes and fears they experienced. This is impossible to imagine or invent, at any rate in such multitude of real details.”

In her 2005 address to the PEN World Voices Festival in the United States, Alexievich described how she found her style:

“The point is not simply to exchange facts and information — the idea is that it’s important to speak of the essence of life and of its mystery.”

“As I was searching for the way to represent this, I began to understand that what I was hearing people say on the street and in the crowds was much more effectively capturing what was going on than what I was reading in print — and the way that people were trying to convey it using their pen,” she said.

Alexievich believes that in today’s world, it is impossible to write “the book” that included everything in the way that 19th century novelists sought to do.

“We need to have a book where lots of people can make a contribution — one person may speak half a page, someone else may have a paragraph or five pages that they can contribute and that this is a way of conveying what’s going on today.”

“And my genre, I refer to it as ‘the novel of voices’ and you might say that my work as just simply lying on the ground and I go and I gather it and I pick it up and I put it together. If Flaubert said ‘I am a man of the pen — or the plume,’ I could say of myself that I am a person of the ear.”

Writing for the Times, Alexandra Alter noted that Alexievich “often put herself at risk by taking on contentious elements of Soviet history and challenging the official narrative of how events had an impact on ordinary citizens.”

“She was seen as a traitor, as unpatriotic,” said Gerald Howard, the executive editor at Doubleday. He published Ms. Alexievich’s book “Zinky Boys: Soviet Voices From a Forgotten War,” about the occupation of Afghanistan, when he was a senior editor at W. W. Norton.

“She was vilified all over the place for this book,” he said, “and she didn’t back down for a second.”

Known for her courage as a journalist, she is equally as well known for the quality of her writing. The Times cited comments by John O’Brien, publisher of Dalkey Archive Press, which released Alexievich’s Voices of Chernobyl in 2005.

“She’s a masterful writer,” he said. “If this were purely for literature, rather than this mix of nonfiction and fiction that she works so well, she would deserve to get this prize because she’s so deeply rooted in a sense of humanity and suffering.”