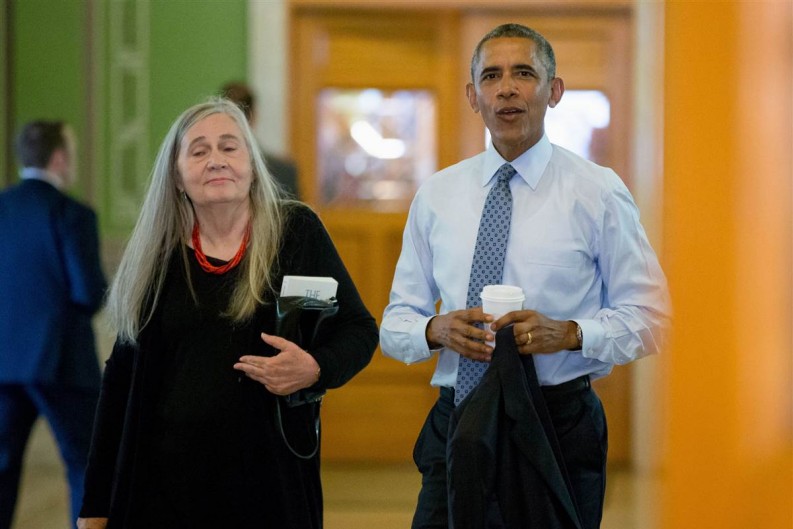 In an extraordinary event, President Barack Obama sat down for an in-depth conversation with author Marilynne Robinson for the New York Review of Books.

This is simply amazing.

In their conversation, the two talked about faith, politics, literature, politics, education, the economy, citizenship, and…America, in a way that is difficult to imagine any other President doing with any other author.

It is, as I said, simply amazing.

Their conversation, published in two parts by the New York Review of Books needs to be read (or listened to) in full — you can read part one here and part two here or listen to it here — but here’s a small sample:

The President: Well, as you know—I’ve told you this—I love your books. Some listeners may not have read your work before, which is good, because hopefully they’ll go out and buy your books after this conversation.

I first picked up Gilead, one of your most wonderful books, here in Iowa. Because I was campaigning at the time, and there’s a lot of downtime when you’re driving between towns and when you get home late from campaigning. And you and I, therefore, have an Iowa connection, because Gilead is actually set here in Iowa.

And I’ve told you this—one of my favorite characters in fiction is a pastor in Gilead, Iowa, named John Ames, who is gracious and courtly and a little bit confused about how to reconcile his faith with all the various travails that his family goes through. And I was just—I just fell in love with the character, fell in love with the book, and then you and I had a chance to meet when you got a fancy award at the White House. And then we had dinner and our conversations continued ever since.

So anyway, that’s enough context. You just have completed a series of essays that are not fiction, and I had a chance to read one of them about fear and the role that fear may be playing in our politics and our democracy and our culture.* And you looked at it through the prism of Christianity and sort of the Protestant traditions that helped shape us, so I thought maybe that would be a good place to start.

Why did you decide to write this book of essays? And why was fear an important topic, and how does it connect to some of the other work that you’ve been doing?

Robinson: Well, the essays are actually lectures. I give lectures at a fair rate, and then when I’ve given enough of them to make a book, I make a book.

The President: So you just kind of mash them all together?

Robinson: I do. That’s what I do. But it rationalizes my lecturing, too. But fear was very much—is on my mind, because I think that the basis of democracy is the willingness to assume well about other people.

You have to assume that basically people want to do the right thing. I think that you can look around society and see that basically people do the right thing. But when people begin to make these conspiracy theories and so on, that make it seem as if what is apparently good is in fact sinister, they never accept the argument that is made for a position that they don’t agree with—you know?

Robinson: Because [of] the idea of the “sinister other.” And I mean, that’s bad under all circumstances. But when it’s brought home, when it becomes part of our own political conversation about ourselves, I think that that really is about as dangerous a development as there could be in terms of whether we continue to be a democracy.

The President: Are you somebody who worries about people not reading novels anymore? And do you think that has an impact on the culture? When I think about how I understand my role as citizen, setting aside being President, and the most important set of understandings that I bring to that position of citizen, the most important stuff I’ve learned I think I’ve learned from novels. It has to do with empathy. It has to do with being comfortable with the notion that the world is complicated and full of grays, but there’s still truth there to be found, and that you have to strive for that and work for that. And the notion that it’s possible to connect with some[one] else even though they’re very different from you.

And so I wonder when you’re sitting there writing longhand in some—your messy longhand somewhere—so I wonder whether you feel as if that same shared culture is as prevalent and as important in the lives of people as it was, say, when you were that little girl in Idaho, coming up, or whether you feel as if those voices have been overwhelmed by flashier ways to pass the time.

The President: Right. You sort of have a self-selecting crew.

Robinson: And also teaching writers—I’m quite aware of the publication of new writers. I think—I mean, the literature at present is full to bursting. No book can sell in that way that Gone with the Wind sold, or something like that. But the thing that’s wonderful about it is that there’s an incredible variety of voices in contemporary writing. You know people say, is there an American tradition surviving in literature, and yes, our tradition is the incredible variety of voices….

And [now] you don’t get the conversation that would support the literary life. I think that’s one of the things that has made book clubs so popular.

The President: That’s interesting. Part of the challenge is—and I see this in our politics—is a common conversation. It’s not so much, I think, that people don’t read at all; it’s that everybody is reading [in] their niche, and so often, at least in the media, they’re reading stuff that reinforces their existing point of view. And so you don’t have that phenomenon of here’s a set of great books that everybody is familiar with and everybody is talking about.

At The Daily Beat, Robinson spoke with Tim Teeman about the President and the talk itself:

The Daily Beast: How long have you known each other? Who first got in touch with whom—and how?

Marilynne Robinson: While the president was campaigning for the nomination he read Gilead. He liked it and praised it very generously, and this was conveyed to me through newspaper articles about him. I met him when he presented a National Humanities Medal to me, then I was invited to a small dinner at the White House and we had some time to really talk. The conversation has gone on from there.

What were your first impressions of him, and how—if any—did they differ from the Obama you knew only as we know him, as president/figurehead/politician?

Of course my impression of him has become richer as I know him better, but it was never at odds with my expectations, really. I’ve never known anyone like him, at the same time so intense and so receptive. I could never have anticipated this. It is so distinctive in him. He is interested and curious, but never intrusive. He has a very generous imagination of other people’s lives, an actual fondness for them. He might make a fine novelist or historian for that reason.

Extraordinary on every level, the talk between Obama and Robinson is a must read.