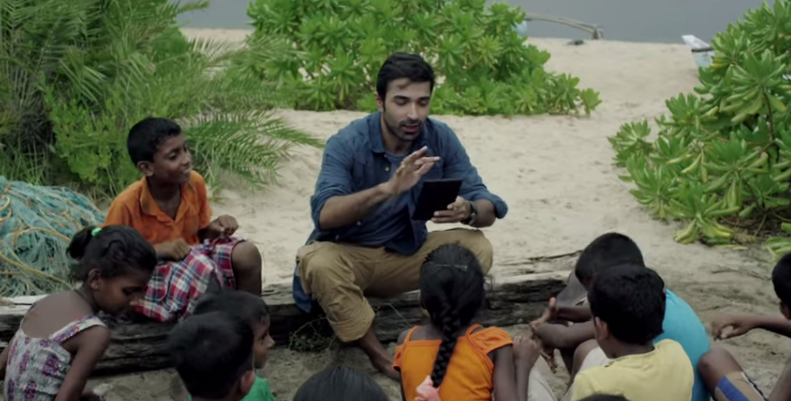 The Kindle has been heavily promoted in India, but it is priced too high for the average consumer.

A late arrival and a poor mix of products and pricing means Amazon has ceded ground in India to upstarts including Flipkart and Infinibeam. Back in 1994, Amazon set out to become “the world’s largest bookseller,” making books from all over the world available a mouse click away. And they did it, quickly expanding into additional product categories, selling everything from car parts to condoms. Jeff Bezos’ juggernaut soon galloped through U.S. and out into the world, setting up shop in as many promising markets as they could.

But they got stalled when it came to Asia, the fastest growing online market in the world. The first evidence of this was in China where Jack Ma’s Alibaba dominates e-commerce, holding onto its nearly 80% market share. Amazon entered China in 2011, but the company hasn’t flourished and some analysts estimate that Bezos’s company may have lost $600 million in China by now.

This experience gave the Seattle company pause, especially when looking at the opportunities inIndia. They looked and planned, but like Hamlet, couldn’t quite get themselves to commit. Their lack of early resolution resulted them losing ground to upstarts, especially when it comes to books.

When it opened up shop in India in 2013, it was a good six years too late. In 2007, facing policy issues and debates with the Indian government, Amazon had earlier lost two early employees who then went on to set up a clone of the company, naming it Flipkart. By the time Amazon could resolve its issues and launch, Flipkart was the market leader. Today, it’s valued at $15 billion. And in that six year period, others such as Infibeam got in on the game, too, taking bites out of the multi-billion dollar pie that was Amazon’s alone for the taking.

A Missed Opportunity with CreateSpace

Print-on-demand has a huge potential market in India, where the supply of manuscripts enormous and many remain unpublished forever, or fall into the hands of vanity presses — particularly in the professional market. A professional network of affordable, pay-as-you-go POD vendors is crucial for the self-publishing industry in India. But again Amazon, has lost their first-mover advantage by failing to yet launch CreateSpace in India. Penguin has already moved ahead by launching their self-publishing vertical, Partridge, which remains a bit steep in pricing. CreateSpace, by catering to individual authors but also to small-run publishers, could be a game-changer in India. But that opportunity won’t be there forever.

Kindles Are Priced Too High

Kindle is an important revenue stream for Amazon worldwide, and its success should translate to India as well. The marketing for Kindle is highly visible throughout the country; they have attracted most of the publishers to participate; they signed up the bestselling author Amish as Kindle brand ambassador. Yet despite all these efforts, the overall sales of Kindles and ebooks are dismal. Why? Prices are simply too high. A basic Kindle reader sells for 5,000 Indian rupees. But you can buy a new Android smartphone for less than 4,000. How does Amazon expect Indian readers to shell out more for a cheap looking basic e-ink reader? Surely they hoped that with rising smartphone penetration and increasing screen sizes, people might use their smartphone to read ebooks via the Kindle app, but that is not happening either.

With their “walled garden” approach, in order to move ebooks in India and dominate the segment, they must look to equip book readers with dedicated devices, be they e-ink readers, Kindle Fire tables (which also aren’t selling) or the Fire smartphone (which may never come). But without an effective Kindle devices strategy in India, Amazon will continue to lose ebook battle in an increasingly app-only, e-commerce market. Yes, Amazon Kindle Unlimited subscription ebooks launched last month, priced at a relatively modest 199 rupees per month, but without an existing user base (and underwhelming title selection), they are likely to continue to struggle. Perhaps, another elaborate promotion — something worthy of Bezos’ earliest entrepreneurial efforts — might make the difference. Buy a Kindle and get Rs 5,000 worth of book vouchers redeemable for 24 months? That might make a difference.

But you never know. The Indian reader and consumer is as savvy and slippery as any in the world. And it’s going to take more than Amazon’s American pedigree to make them appealing. What they need, is a proper strategy and the right mix of products and pricing. But that is going to take time — and time, at least for a company that appears to be as impatient as Amazon to grow — may be running out.

Hersh Bhardwaj is a publishing consultant based in New Delhi, with his first book due from HarperCollins India shortly. He is currently overseeing the expansion of a Canadian publishing company in the Indian subcontinent. You can find him on Twitter @HershBhardwaj.