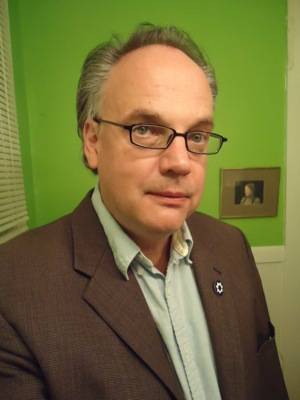 After Michael Derrick Hudson adopted an Asian pseudonym, he landed a poem in the “Best American Poetry” anthology, prompting anger, recrimination and debate. At The Independent, Justin Carissimo reports that “a white author is under fire after using an Asian pen name in order to avoid rejection letters.”

The newly published The Best American Poetry 2015 includes a poem from one “Yi-Fen Chou” the pen name of Michael Derrick Hudson.

The volume includes what Hudson calls a “very short answer” for why he did what he did. Since getting rejected a “multitude of times” when writing under his real name, using an Asian identity was a “successful” way for him to get published.

“The poem in question, ‘The Bees, the Flowers, Jesus, Ancient Tigers, Poseidon, Adam and Eve,’ was rejected under my real name forty (40) times before I sent it out as Yi-Fen Chou (I keep detailed submission records). As Yi-Fen the poem was rejected nine (9) times before Prairie Schooner took it. If indeed this is one of the best American poems of 2015, it took quite a bit of effort to get it into print, but I’m nothing if not persistent” …

“I realize that this isn’t a very ‘artistic’ explanation of using a pseudonym. Years ago I did briefly consider trying to make Yi-Fen into a ‘persona’ or ‘heteronym’ a la Fernando Pessoa, but nothing ever came of it.”

After poet Saeed Jones posted the excerpt on his Facebook page, the negative reaction was not long in coming.

The Independent reports that the Angry Asian Man blog “accused Mr. Hudson of yellowface in poetry and predicted that the author wouldn’t be enjoying his newly discovered privilege much longer.”

Award-winning author Sherman Alexie was the anthology’s editor, and responded to critics in a lengthy blog post:

I chose a strange and funny and rueful poem written by Yi-Fen Chou, which turns out to be a Chinese pseudonym used by a white male poet named Michael Derrick Hudson as a means of subverting what he believes to be a politically correct poetry business.

I only learned that Yi-Fen Chou was a pseudonym used by a white man after I’d already picked the poem and Hudson promptly wrote to reveal himself.

Of course, I was angry at the subterfuge and at myself for being fooled by this guy. I silently cursed him and wondered how I would deal with this colonial theft.

“As part of my mission to pay more attention to underrepresented poets and to writers I’d never read, I gave this particular poem a close reading. And I found it to be a compelling work. In rereading the poem, I still found it to be compelling. And most important, it didn’t contain any overt or covert Chinese influences or identity. I hadn’t been fooled by its “Chinese-ness” because it contained nothing that I recognized as being inherently Chinese or Asian. There could very well be allusions to Chinese culture that I don’t see. But there was nothing in Yi-Fen Chou’s public biography about actually being Chinese. In fact, by referencing Adam and Eve, Poseidon, the Roman Coliseum, and Jesus, I’d argue that the poem is inherently obsessed with European culture. When I first read it, I’d briefly wondered about the life story of a Chinese American poet who would be compelled to write a poem with such overt and affectionate European classical and Christian imagery, and I marveled at how interesting many of us are in our cross-cultural lives, and then I tossed the poem on the “maybe” pile that eventually became a ‘yes’ pile.

“Do you see what happened?

“I did exactly what that pseudonym-user feared other editors had done to him in the past: I paid more initial attention to his poem because of my perception and misperception of the poet’s identity. Bluntly stated,
I was more amenable to the poem because I thought the author was Chinese American …

“But I had to keep that pseudonymous poem in the anthology because it would have been dishonest to do otherwise. If I’d pulled the poem then I would have been denying that I gave the poem special attention because of the poet’s Chinese pseudonym.

“If I’d pulled the poem then I would have been denying that I was consciously and deliberately seeking to address past racial, cultural, social, and aesthetic injustices in the poetry world.”