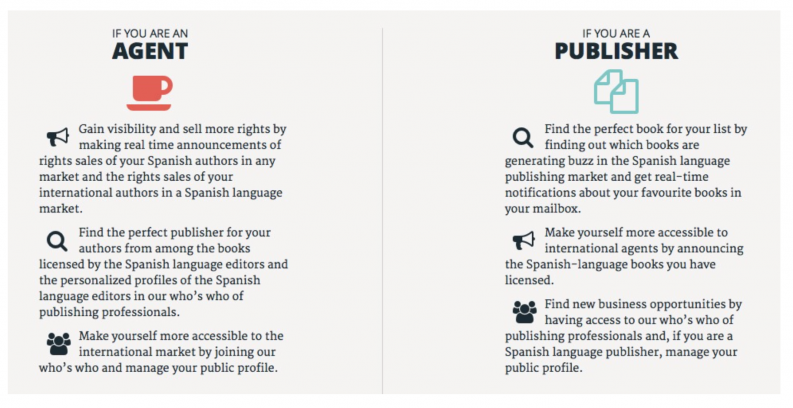 On Tuesday, two Spanish literary agents, Anna Ascolies and Martina Torrades, launched The Spanish Bookstage, an new platform that intends to the make the buying and selling of Spanish-language literary rights significantly easier. The new platform comes at a time when the Spanish publishing industry (both in Spain and Latin America) is gaining stronger visibility in the global marketplace. In 2014, some 79,000 new titles were published in Spain, with a further 194,000 in Latin America the previous year — meaning there is no shortage of books from which foreign language editors can plunder new talent.

According to the Instituto Cervantes report, El español: una lengua viva (Spanish, a live language), over 500 million people speak Spanish across the globe and it is the third most spoken mother tongue in the world following English and Mandarin Chinese. In all, the Spanish-language publishing market is valued at around 6 billion euros ($6.76 billion) per year. And overall, according to advance information from the Panorama of Spanish Book Publishing, which offers data about Spain’s book publishing sector, the number of Spanish books translated into a foreign language has increased in recent years. In 2014 over 1,560 titles were translated, representing 8.1% of translations and 1.7% of total published books. These figures are augmented by translations of Latin American works in Spanish into other languages, which are also on the rise.

Ascolies and Torrades realized a market this significant needed a platform that would help speed up rights searches and facilitate business, especially for English-speakers who sometimes find it difficult to discover just the right book. “The Spanish Bookstage is the first online platform that provides real-time information about the Spanish-language book rights trade, offering its subscribers a comprehensive account of all the professional activity in the sector as well as access to an important database of the principal figures involved (publishers, literary agents and translators) in the Spanish-language publishing world,” says the press release. The Spanish Bookstage is set up to enable anyone search for books, identify the rights owner, to learn if the rights are available, and more. Spanish-speaking publishers and agents will be able to upload all the information for rights purposes, and their contacts, to the platform for free. Access is based on a freemium model, with fees for enhanced features. At present, non-Spanish publishers will be limited to “searching,” but more features of the site will be available in translation shortly.

Services similar to The Spanish Bookstage are available in other international markets, including Publishers Marketplace, LiteraryMarketPlace, Orights, IPR License, Inbooker, and PubMatch.