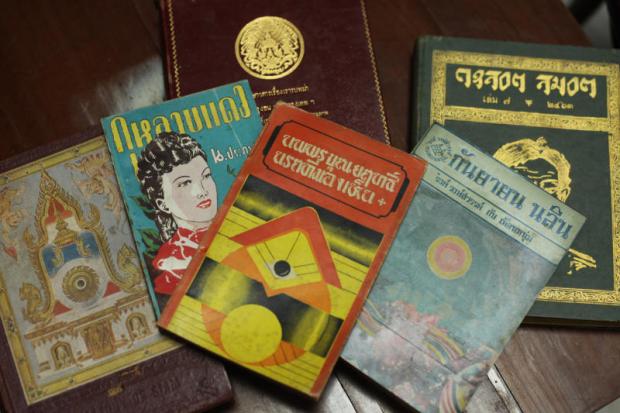 A selection of the rare Thai books mistakenly sold to a used bookstore in Bangkok as “recycling materials.” (Photo: Bangkok Post)

After tons of rare books from Silpakorn University Central Library were mistakenly sold to a Bangkok used book shop for “recycling,” collectors swarmed.

A surprise delivery of rare and antique books has overjoyed book lovers in the Bang Bon district of Bankgok. The Bangkok Post reports that three-metric-tons of books and magazines from Silpakorn University Central Library were “mistakenly” sold to a used book shop. Collectors are flocking to the store to pick up the titles, some of which that date”back to the reign of King Rama VI,” while others are “old sociological and anthropological journals that can no longer be found anywhere.”

The age of e-books and blogs has done nothing to thwart antique book collectors’ passion. In fact, technology is being used to further their hobby. People are purchasing the rare books and posting them on Facebook, which, of course, furthers the trade.

According to Thongboon Korkitsunthornsarn, founder of the online bookstore Loong Thong, book collecting is so popular because books “have become rarer and consequently the price for them has gone up considerably as well.”

Thongchai Likitpornsawan, owner of Tonchabab Library and an expert in antiquarian books, says the passion for collecting can be understood “quite easily,” as the price for books from the periods of King Rama IV to VII — annals or national literature which was mostly printed in cremation books of royal figures or noblemen — has already gone up [in price] too far. Collectors of later generations turned to books from later periods, like during the reigns of King Rama VIII and the present monarch. And books from these periods are getting more and more expensive.”

And the price for rare editions appears to be no obstacle, as collectors continue snatching up as many rare books as possible from the accidental delivery. And as for the Silpakorn University Central Library, who made the mistake in selling the rare books to the bookstore, their error appears to be irredeemable: the books had been sold as recycling materials and only realized their mistake days later. Once they did, the administration and staff began frantically rushing to purchase back their antiques, but many pieces had already been ruined by rain or bought up by collectors for their own book libraries.