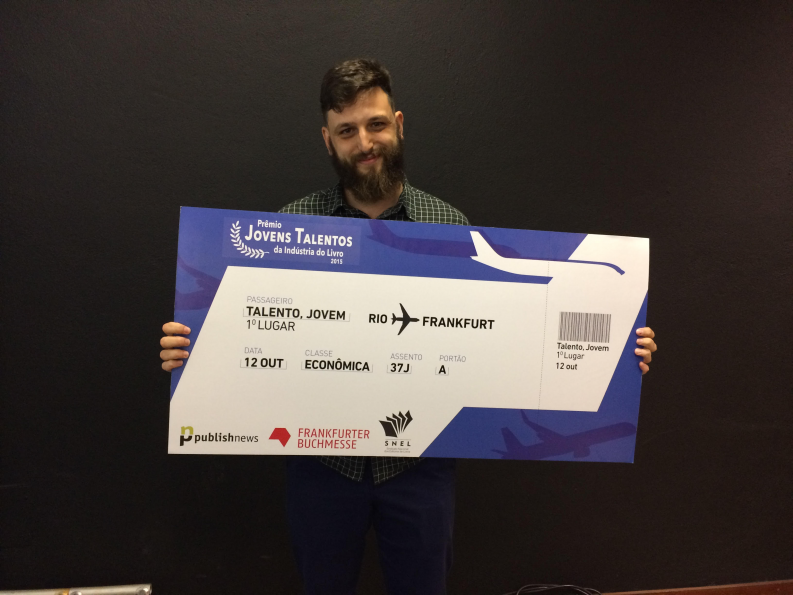 When I e-mailed my colleagues at the Frankfurt Book Fair suggesting we create an award in Brazil similar to The Bookseller Rising Stars and the Publishers Weekly Star Watch, I knew it was a very long shot. I simply did not have any budget to make it happen, and even if I got the funding, we would only have three months to launch the prize, get nominations and choose the winner in time to announce it at the Rio de Janeiro’s Book Fair, the Bienal do Livro. The clock, as I mentioned, was ticking and I had nothing prepared.

Ricardo Costa, Frankfurt’s director for Latin America, met with me and said they loved the idea, which included selecting one Brazilian talented young professional to go to the Frankfurt Book Fair with all the expenses paid and also VIP Business Club tickets for the other winners. But the problem remained, we needed a sponsor, and we could only think of one: SNEL. This is the Portuguese acronym for the Brazilian Publishers Trade Union. We reached Marcos Pereira, SNEL’s president and Sextante’s publisher, and he loved the idea. We got the money! But this was already July and I was drowning in the launch of PublishNews’s new website. And the clock was ticking.

Somehow, I managed to launch the “Prêmio Jovens Talentos da Indústria do Livro” [The Book Industry’s Young Talented Award] on August 10th. Over the previous weeks, while discussing with Ricardo all the award details, I had the privilege to have coffee with Philip Jones, The Bookseller’s editor-in-chief, at a Rio de Janeiro bookstore. Philip was vacationing in town. His tips were precious and we realized that simplicity was key.

So we decided that candidates for the award had to be born in 1980 or later – the age of 35 was the limit — and the award would be open to any publishing professional who had achieved something special in their careers. We launched the award accepting nominations from anyone, including self-nominations, asking for a 500-word testimonial and supporting documents. We also opted for a very small jury: myself, Ricardo Costa, and a prominent and respected publishing personality, Mr. Alfredo Weiszflog, president of Melhoramentos’. We decided to announce the five winners on August 28 and scheduled the award ceremony for September 3rd, at Bienal do Livro, when the first place would be revealed. Again, the clock was ticking.

During the following three weeks, I had some of the most rewarding moments in my publishing life. Nothing less than 73 people were nominated for the award, and the quality of the candidates made the jury’s job particularly hard. It was pleasant to see how the award was helping our young talents being recognized by their colleagues, peers and bosses. When evaluating the candidates, I found myself reading letters such as one from a #1 New York Times author recommending the work of a Rio de Janeiro-based marketing assistant or another one from the CEO of a top five Brazilian publisher recommending his junior editor. If nothing else, the award had already accomplished something: the recognition of the fantastic work being done by the young Brazilian publishing professionals.

But we had to pick the winners, and after struggling with the high level of the candidates, we selected six names, — one extra since two candidates had applied as two-woman team to the prize. The winners are the following:

A sci-fi editor, São Paulo-born Daniel is only 28 years old, but has been in the book industry since he was 18. He started as a bookseller at independent Livraria da Vila, then was a vendor manager at FNAC. After FNAC, Lameira crossed over to the publishing side, working at the Brazilian branch of Portuguese publisher LeYa and then at mid-size Novo Século. In 2014, he went to Aleph publishing house, where he runs the editorial department and, according to Aleph’s CEO Adriano Frommer, “he helped to consolidate the company’s growth, continuing the sci-fi program with a more inclusive and commercial approach.” The truth is that Lameira revolutionized Aleph’s catalogue and raised public awareness. It was his idea to pursue and publish Star Wars books in Brazil, something that has changed Aleph’s history. One of his most interesting achievements was the launch of the “Intergalactic Meetings,” events that draw thousands of sci-fi fans in theaters and auditoriums around Brazil in the same way that Brazilian YA authors draw thousands of teen-aged girls to their events. A trained lawyer and law books editor, Henderson Fürst was born in 1988 with a rare neurological degenerative disease which prevented him from playing like the other kids during his childhood, so books became his main entertainment. When he was 23, he was commissioned with a challenging task at law books publisher Editora dos Tribunais to update and republish a 60-volume law collection called Tratado de Direito Privado by Pontes Miranda. He not only succeeded, but finished the job in only 10 months. From that moment on, his career took off. Henderson also created the course ”How (not) to write a term paper” that he offers pro-bono in law schools. His idea is to use the course as an incubator to develop and discover young authors, a strategy that is paying off. After majoring in Publishing at the University of São Paulo, Lilia Zambon obtained her master degree in Books and Knowledge at the École Nationale Supérieure des Sciences de L’Information e des Bibliothèques, in Lyon, France. Today, Lilia is the marketing manager of Grupo Companhia das Letras, which is 45% owned by Penguin Random House, the world’s largest trade publisher. Despite her young age – she is 30 years old – her career has ranged across many disciplines: she has worked in sales, in marketing and in editorial, as a proofreader and editor. She worked as an acquisition editor at the Brazilian launch of Planeta before joining PRH’s Brazilian partner, where she helped, also as an editor, to launch the imprints Paralela, Portfolio and Panelinha.

Journalist, publisher, writer and entrepreneur, 30-year old João Varella introduces himself as gremista, gaucho and Brazilian, in this order. This shows both his fanatic devotion to the Gremio football team and his desire to keep the tradition of those born in the southernmost state of Brazil, the gauchos, to love their province more than their country. Now based in São Paulo, Varella and two partners founded a small and alternative publishing house called Lote 42 in 2012. Their business model is focused on direct sales from their own website. “We see bookstore sales as a marketing tool and not a revenue source,” says Varella. And in a country where most sales are done through consignments, and logistics are poor, he has a point. Trying to get some extra traction to Lote 42’s e-commerce during FIFA’s World Cup last year, Varella saw his company’s brand skyrocket on the social media platforms after a campaign that promised a cumulative 10%-discount for each goal scored against Brazil on the day of the game. Everything was going great until Brazil suffered the historical defeat of 7 -1 against Germany in the semi finals. Lote 42 honored its promise and sold books at a 70% discount – and it paid off. The story became a meme on the Internet and on Facebook alone, 3.5 million people read about the discount. On the way to the awards ceremony this year in Rio, Varella confessed that “If Germany had scored an 8th goal, we wouldn’t have be able to honor the promise.” And a 50 or 60% discount would never have the same effect, so the 7 German goals seemed actually tailored for Lote 42. In addition to being a publisher, Varella is also a very unique bookseller. He bought a newsstand kiosk in São Paulo downtown – the Banca Tatuí – and made it into a mini-bookstore that sells some than 300 titles from 70 independent publishes in a 55-square-meter space. Not satisfied, he uses the kiosk’s roof as a stage for music concerts to promote the bookshop and signings. João Varella, therefore is a very unique gremista, gaucho and Brazilian book professional.

When I received the nomination of Jéssica and Veronica, my first reaction was to get mad that they had nominated themselves as a team. The rules were absolutely flexible, but one simple rule was clear: the prize was an individual one. However, I only had to start reading their achievements to fall in love with their story and understand that there was no way they could be nominated individually. Jéssica and Veronica were interns at Globo Livros, the publishing arm of Organizações Globo, a giant media group that owns the main TV station in Brazil. As Globo interns, they were required to develop an innovative and profitable project for the publishing house. As 22-year-olds, Jéssica and Veronica embraced the mission in the most serious way and proposed the launch of an imprint focused on Young Adult and New Adult titles called GloboAlt. They executed the entire project, from the selection of titles from Globo’s catalogue that could migrate to the new imprint and the acquisition of other titles, to the logo design and brand strategy. More importantly, to support the project, they conducted research among booksellers and readers, while monitoring the bestselling charts and the competitors’ performance. Using an online form, they were able to conduct a survey with 2,500 young Brazilian readers that was included in their project assessment to their bosses. When they presented their project to the management of Globo Livros, the executives were probably expecting something closer to a boring term paper, but were so mesmerized that the only reaction was to decide to launch GloboAlt for real. “Jéssica brought Veronica brought not only their enthusiasm to Globo Livros but also a different market view – the view of youngsters that love reading and that saw in their friends and in themselves the need to change,” said Mauro Palermo, Globo Livros’ managing director.

And the winner is…

On September 3rd, in a ceremony at the Bienal do Livro, the winners received their trophies and Daniel Lameira was announced as the first place winner. He will travel to Frankfurt with all expenses paid by the award’s sponsor, SNEL. He will also be granted a Business Club VIP ticket by the Frankfurt Book Fair, and the same offer will be made to the other five winners. Lameira has also been invited to give a lecture at the collective Brazilian booth at the Frankfurt Book Fair by the Brazilian Book Chamber.

As an individual experience, working on this project has been extremely fun and gratifying. With the launch of the Brazilian Book Industry’s Young Talent Award, the positive impact on our young professionals were so overwhelming that I suggest that every market in the world starts a similar award to recognize young talent. Perhaps in a few years, we might even have a little international convention of young talents at the Frankfurt Book Fair’s Business Club.