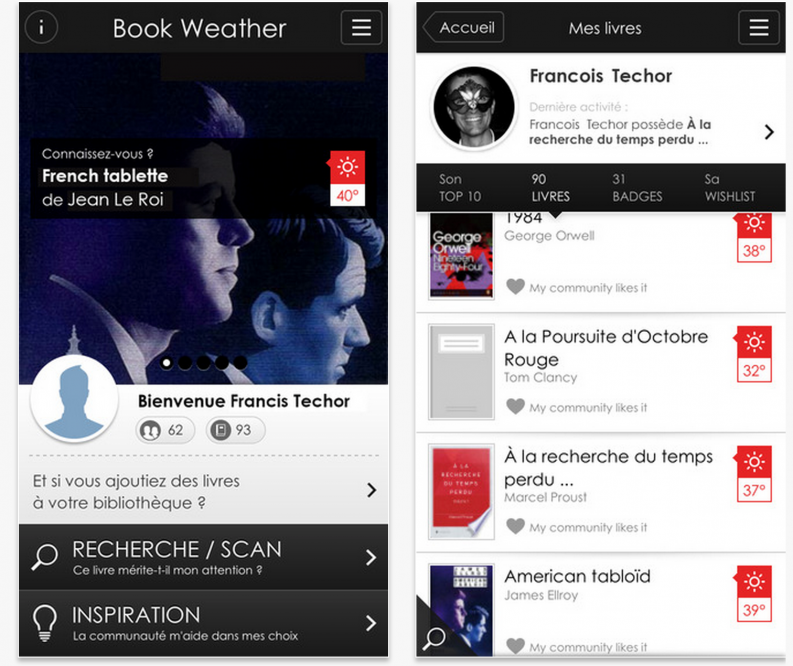 French app BookWeather is a social network that rates books as you might describe the weather, that also offers a bespoke physical book subscription service.

BookWeather is a French social media book recommendation engine for readers that uses calculations based on your friends, wish lists, and a variety of other user data to send you book recommendations. You can register your own titles (much like Goodreads) or scan books via barcode, which will reveal the “weather” — the social media ‘temperature’ or rating, what is trending, etc. — for that particular title. It’s a unique take on online ratings for books.

The service is also extended by their Books Box program, which will deliver actual, physical books to your door. Screenshots of the BookWeather app in action.

The first version of Books Box, which was released in 2013, originally sent books based on what was registered as read or not read on the app. As noted by Actualitte.com, the updated version, released earlier this year at the Salon du Livre in Paris, analyzes the user’s activity to refine the selection based on the user’s “literary friendships.” The algorithms now base the book selections on “people followed, titles present in the wish lists, and the various actions of users.”

Once the algorithm has found an appropriate title for the user, the app will “send them a new work, that is not already part of the wish list.” And, if the selection is unsatisfactory, you can get the user can get their next Books Box free.

The app’s service will be available for around 13 euros for one shipment, with various options for having books sent at regular intervals. Francois Rochet, a designer for Weather Book, says, “Most of our users have requested a monthly basis, but we will probably vary the frequency to adapt to reader’s rhythms.”

The idea for this type subscription service is not new. Competitors include The Kube and Book Me, as well as similar services offered by various booksellers. It is the data collection from the app itself that makes Books Box unique.

Version 3 of the app will be available for Android, iOS and the web and will be release in October. A Spanish-language version of the app is also in the works.