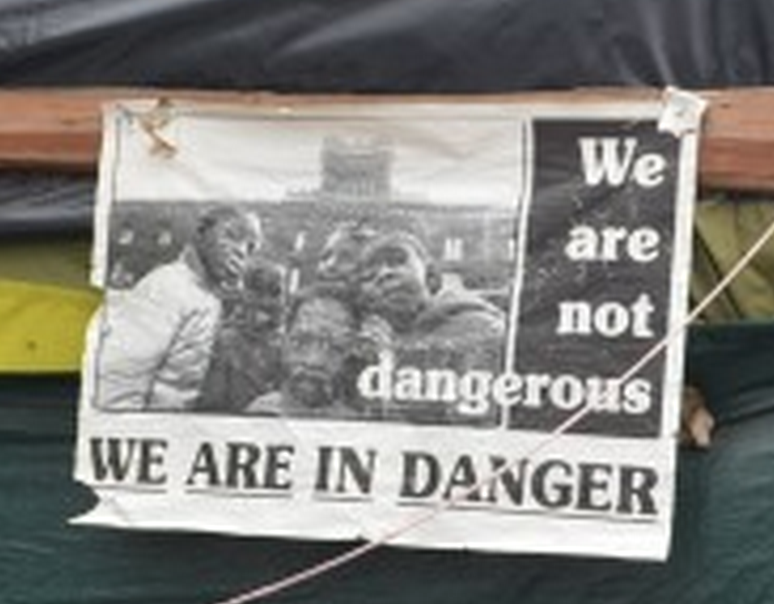 A view across Calais’ sprawling migrant camp, called the ‘Jungle’ (1)

More than 1,000 people, publishers and booksellers have donated to the “Jungle Library” at the Calais migrant camp, which is now raising money for supplies.

Donations and offers of help have poured into “Jungle Books,” the makeshift library set up by British teacher Mary Jones in the migrant camp in Calais, northern France, following the article that appeared in Publishing Perspectives on 24 August. A sign directed at some parts of the media.

The establishment of Jungle Books was broken exclusively on this site and was picked up by the Guardian online in the UK, and the French magazines Livres Hebdo, ActuaLittée, with more coverage forthcoming in the International New York Times. There was – and continues to be – a big response on Facebook and Twitter, and Jones has spent the last three weeks feeling by turns overwhelmed and extremely grateful.

“As soon as the article went out my mail box was full of offers of help,” she said. “It has been brilliant. I want to thank everyone so much. Almost immediately an organization got in touch that publishes children’s books in Arabic and English, and they also do workshops for parents and children in refugee camps. I have had so many offers of books and help – books for kids in native languages, someone who has worked in Eritrea/Ethiopia and speaks the local languages who will come and help out, an organization which works with refugees which is going to do a workshop with parents and children on the importance of education, links to libraries in other European migrant camps like Lampedusa…” A migrant watches the lorries – and police.

British publishers Verso Books and And Other Stories are sending titles to the library, and a number of independents are involved in collecting money and donations, among them the Big Green Bookshop in north London, the Yellow-Lighted Bookshop in Nailsworth and Tetbury in Gloucesteshire, and Berkeley Books in Paris.

A business man in Poland has offered €1,000 to fund a “school in the cloud” giving online access to lessons for kids, but Jones says “I have to inform him that as yet the school has no electricity, no wi-fi, no computers and the door has swollen with the wet weather so there is no lock on the door.” Hence her establishment of the crowdfunding site which will help buy these essentials.

The site has already raised nearly £2,000. Jones says: “By spending a lot of time in the Jungle I am aware of the migrants needs and what might make their lives easier, especially as colder days and longer nights approach. Ideally, I would like to supply generators (€150 each) to as many ‘neighborhoods’ as possible so they can share electricity. I have also started supplying cooking kits comprised of gas stove and gas bottle (€80) and LED inspection lamps which can be hung in tents and recharged by generator (€20). I also buy second hand shoes and jackets, groundsheets and agricultural plastic (€100 a roll). For the school I would love to have four or five laptops to access online resources, but also to help migrants to Skype with family.”

Her initiative coincides with a Europe-wide outpouring of help for refugees in which the book industry can hold its head high. The campaign led by author Patrick Ness – and supported by many fellow authors, among them Philip Pullman, David Nicholls, Marian Keyes and Jojo Moyes – has already raised more than £500,000, while the ‘Books say Welcome’ initiative by the German Publishers & Booksellers Association, the Frankfurt Book Fair and LitCam – the Frankfurt Book Fair Literacy Campaign – is admirable.

The latter is sponsored by the author and Middle East expert Navid Kermani, who is to receive this year’s Peace Prize from the German Publishers and Booksellers Association. The scheme aims to give refugees access to educational and reading material and will provide “reading and learning corners” near refugee housing. The Frankfurt Book Fair is also offering free tickets and events for refugees at the fair.