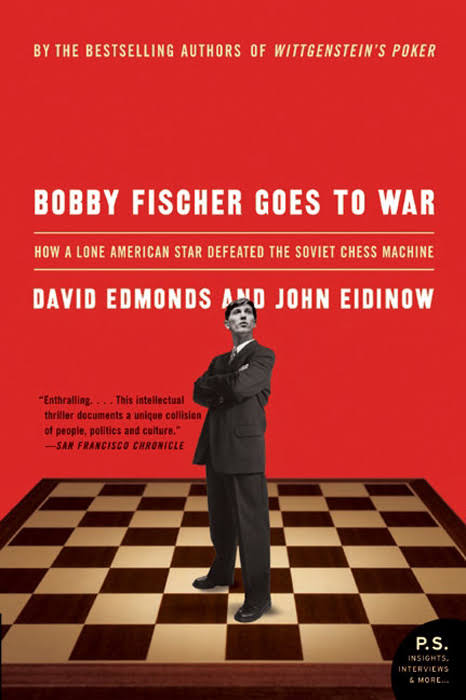 Perhaps no other sport has inspired more beguiling and philosophically challenging writing than than chess.

In the history of sport — and publishing — it’s not even close: one sport has had more books (and for that matter, magazines, tracts, pamphlets and handbills) published about it far more than any other: Chess.

Whenever chess players proudly make this assertion, there’s usually a groan and the obligatory reply: “But chess isn’t a sport; it’s a game.” I don’t know. Golf is considered a sport; even croquet, as in the Wimbledon All England Tennis and Croquet Club is professional sport; and for people who don’t “get” auto racing, driving around on a oval at 200 mph seems less a sport than a death wish (R.I.P. Justin Wilson). But in my mind, chess isn’t a game for one reason: there’s no chance involved in it. No rolling of the dice, no flipping of a coin (a practice which even makes its way into professional football), no “that’s-how-the-cards-were-dealt.” And if we are to judge what is and what isn’t a sport by what ESPN and it’s many sister networks program, Chess does make the occasional appearance on that network, as it once did on ABC’s Wide World Of Sports.

But not only is chess a sport, it is its own language, and perhaps because of that, has almost its own sinecure within the publishing industry. Books on chess are not only legion, but in many cases incredibly long and complex, rife with tables, graphs, symbols and that weird alpha-numeric notation that seems totally inscrutable to anyone who hasn’t played the game — and learned the notation of that game … I mean sport.

With the recently-released film, Pawn Sacrifice, in which Tobey Maguire stars as the wunderkind-turned-insane-anti-semite Bobby Fischer, the book Bobby Fischer Teaches Chess (Bantam, reissue 1982) which has always stayed in print, is surely going to have a new slew of followers. In truth, Fischer had very little to do with the writing of the text, but it is still one of the best introductions to the sport for any beginner, young or old. However, the strange thing about chess is that some of the writing about it approaches something like a theory of aesthetics, almost a philosophy. In the many, many texts on Chess none is more readable, or beautiful, than Laskers Manual of Chess by Dr. Emanual Lasker (1947; Dover Edition 1947). I don’t mean “beautiful” in some belles lettres manner, but in that the writing style is both eminently lucid and lovingly dated. As Lasker states: “The European career of Chess began a thousand years ago. At that time it was an admired favourite in Spain, the game of the noble and the learned. In feudal castles and at the courts of princes, it was cultivated; it was praised in artistic poems. For centuries it remained the aristocratic, noble, royal game, accessible only to a refined taste. Later, it penetrated through Italy and France, and at last found a home wherever the foot of the white man trod.” (p. 1)

However, what really makes this book work, and sing, is Fred Reinfeld’s “Emanual Lasker: An Appreciation,” an eleven-page, two-columned sort of “Foreword” that introduces us to Dr. Lasker himself who, at different points in this Prologue is called an “anarchist,” a “philosopher,” a “cheerful pessimistic” or a “moderate optimist,” a “fighter,” a “genius” and the “founder of a school” of Chess.

Further, Reinfeld reminds us that “No other chessmaster has insisted so strongly on the resemblance between chess and life. Most chess books deal very strictly with technical chess data; no other chess book treats non-chess material in the way that Manual does.” But as surely as Bobby Fischer cannot be understood without being placed across the table from Boris Spasky, Emanuel Lasker’s chess can only be understood vis-à-vis not only his competition, but his forebears. Hence there are multiple references and judgments of Steinitz, Staunton, Morphy, Tchigorin, Tarrasch, Janowski, and the man who finally beat and blanked the almost unbeatable Lasker, Raoul Capablanca.

One need not know much, or anything, about Chess to enjoy this survey by Reinfeld. In fact, it is its very alien-ness that makes it so strangely readable. A neophyte can surely not learn chess (or baseball or croquet or Monopoly) from reading a book about it, one can only start playing and then hope to begin understanding what the hell is going on in this crazy game which is, as Lasker tells us “has had the will, the intent, the meaning of picturing a war between two parties: a war of extinction, conducted according to rules, laws, in a cultivated manner, yet without clemency.”

And the word “crazy” is maybe the best word to describe Chess. By the end Bobby Fischer was clearly insane. But as the producers of HBO’s documentary on him Bobby Fischer Against The World point out, he was far from the first madman to excel at Chess: another champion, Louisiana’s Paul Morphy (1837-84) whose last name sounds like something from Samuel Beckett, famously died at age 47 in a bathtub surrounded by women’s shoes — or at least the urban legend goes.

Regardless, the film Pawn Sacrifice is surely going to re-ignite interest not only in Bobby Fischer and his steady descent from chess-greatness into madness, but it will probably help continue the non-stop publication of Bobby Fischer Teaches Chess, which is indeed a good primer. But for a great work of art, both on Chess and life, I’d bet my money on Lasker’s Manual of Chess over Fischer any day.

On Thompson Street in New York, there’s a wonderful store called Chess Forum. On the wall behind the counter are long quotes from T.S. Eliot, one of which is from Eliot’s “farewell to poetry”, the Four Quartets. The other is, of course, from Part II of The Waste Land: “A Game Of Chess.” I can’t think of too many other sports-stores where perhaps the greatest poet in English of the 20th century is on display.