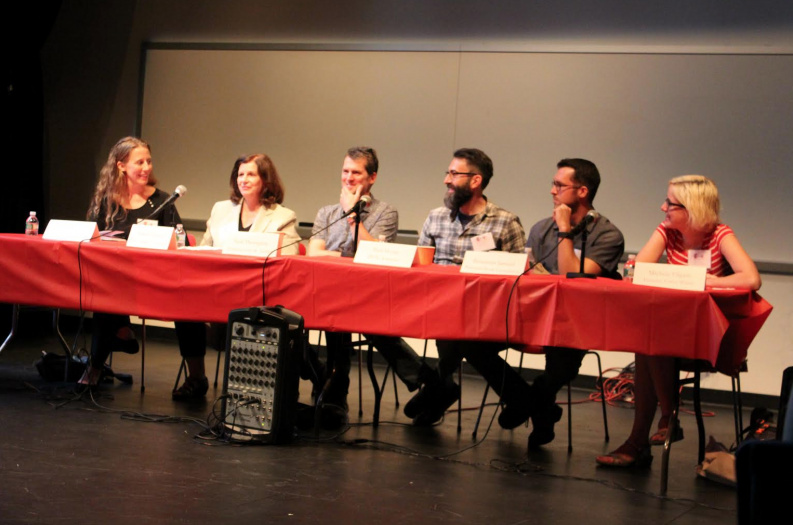 At the annual Slice Magazine Jeopardy benefit, part of the Slice Literary Conference held this past weekend at the Powerhouse Arena bookstore in Brooklyn’s DUMBO neighborhood, four teams ran the gamut of those represented at a two-day conference held at St. Francis College in Brooklyn Heights: Authors, Editors, Agents, and Big Mouths (as they were affectionately named). For a while, it looked like the Agents would take the three trophies, but the Authors prevailed and won handily in the final round with the answer Vita Sackville-West. Indeed, it is the authors who need to prevail, and a takeaway could be that their resourcefulness and curiosity were the theme of the conference. A game of Literary Jeopardy pitted authors, agents, “big mouths,” and publishers against each other … with the authors winning.

The first day’s lunch promised a fabulous conversation between novelist Nicole Krauss and essayist Leslie Jamison, but the truth is that the acoustics were bloody terrible and it was exacerbated by a lunch cart guy wheeling a squeaky rolling cart back and forth from the gym’s entrance filled with dirty dishes and sodas. Shoulders around the room shrugged at one another across the gym, the universal sign language for, “Can’t hear a thing.”

But that was just a false start. Over both days of the Slice Literary Writers conference, writers were able to have one-on-one conversations with agents to discuss their projects, perfect their pitches and learn from some of the best practitioners and professionals in the business. The Art of Nonfiction panel at the Slice conference.

Unraveling the Art of Nonfiction

On Day 1, a session called “Art of Nonfiction” was moderated by Kate Napolitano, editor of Penguin/Plume, who oversaw a dynamic all-female panel of authors including Dani Shapiro, Heidi Julavits, Mira Ptacin, and Kristen Radke. The discussion leaned heavily on two question: “what is memoir?” and “how the narrative nonfiction genre is changing?”

“Memoir is storytelling,” offered Shapiro, the first to also mention Joan Didion as a major inspiration who really broke open the genre. The panel focused also on the idea that narrative is more than just “Oh, this crazy thing happened.” You have to progress ideas; not just a plot. Shapiro suggested that we switch the name of the niche from memoir to inquiry, a more accurate description of what it can mean to twist and turn one’s experience into a readable and relevant book.

This metaphor also emerged from the panel: Think of fiction as your ability to build a dream house from scratch. A memoir is more like buying a fixer upper and working within the predetermined space. You can tear stuff down and build new rooms, but there’s already a footprint to work with. “You’re just talking about being human, and your readers are also human,” said Radke. Across the two days I appreciated these epiphanies and let them settle, but they also left me with a kind of mental fatigue that comes from two days of doing anything, let alone listening to writers talk about craft. The literary community panel at the Slice conference.

The Outer Forces of the Literary Community

Day 2 moved into another direction, from writer process and decision making to the outer community at large who supports the literary community—or rather, the Big Mouths. This panel, moderated by Katie Freeman, a publicist at Riverhead, featured a range of panelists across different niches. Michele Filgate, an essayist and critic; Paul Morris, Director of Literary Programs for PEN; Benjamin Samuel, Program Director for the National Book Foundation; Neal Thompson, of Amazon.com, and Noreen Tomassi, Director of the The Center for Fiction. These panelists offered up ways to engage in the community at large, no matter where one lives (be it an international super culture city or the middle of nowhere). Guests were encouraged to investigate creating local chapters spun off from some national organizations; readings and workshops often following.