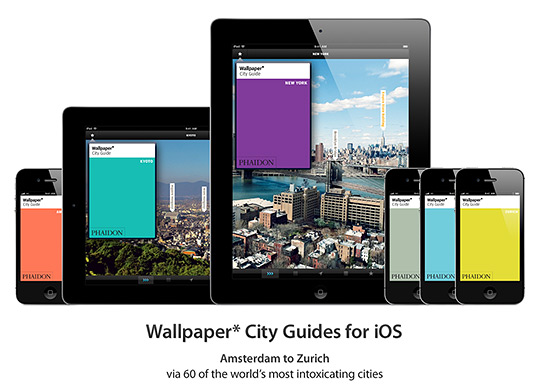 Phaidon has had particular success with their series of Wallpaper City Guides Apps.

The continuation of our series on illustrated book publishing in the US looks at the digital market, where sales pale compared to print counterparts.

This is the fourth in our ongoing series looking at the increasingly competitive and innovative illustrated book publishing market in the United States. Part One outlined several of the challenges facing publishers and offered insight from a variety of publishers, including Ten Speed, Harvard Common Press, Clarkson Potter and Rodale. And Part Two, discussed the lists of Time Inc, Phaidon, Artisan, Phaidon, Black Dog and Leventhal, Abrams, Andrews McMeel and Chronicle Books. Yesterday, in Part Three, we looked at the various sales strategies employed by illustrated book publishers to find consumers.

Though not all of the publishers have provided specific data regarding ebook sales, most have confirmed this business represents less than 5% of their overall sales for illustrated books.  In general the publishers are currently investing fewer resources to the illustrated lifestyle categories and at least a couple of the publishers interviewed expressed that that we’re possilby not as concerned with the design integrity of their ebooks.

But there are exceptions. Aaron Wehner at Ten Speed/Potter/Harmony feels they can benefit from the considerable investment that PenguinRandomHouse has made in digital by continuing to tryout inventive enhanced e books and Apps. He points to particular successes with the App components added to Harmony’s prescriptive non-fiction fitness properties.

Phaidon has had considerable success with their database driven travel Apps – Wallpaper* City Guide and Where Chefs Eat.

At other houses there are a few titles that have gained some traction as iBooks. Rodale’s Thug Kitchen, AMU’s Nom Nom Paleo, and Artisan’s Back in the Day Bakery Cookbook – all recent iBook bestsellers, but the publishers admit to the sales being relatively low in comparison to their pring book counterparts.

In general other houses are somewhat less committed to further investment, more a case of waiting for the market and technology to evolve further.

Dan Rosenberg at Harvard Common Press plans to continue converting all of their cookbooks to digital but has found that video enhancements are not worth the investment. He will focus more investment on physical enhancements.

Michael Jacobs at Abrams, notes “The percentage of ebook revenue derived from 4 color titles is quite small—under 5 percent.  We have not seen a market develop—at the customer or vendor level—for illustrated titles or enhanced illustrated ebooks. When and if it does, we’ll be there as we have processes and people dedicated to our ebook business across our adult and kids publishing.”

Kirsty Melville at Andrews McMeel won’t commit beyond saying, “For the right author or property we are willing to experiment and explore enhanced e-book publishing.”

Christine Carswell at Chronicle Books believes that though sales are still low, there is much left to be learned from the process of working in digital and that it still has potential.

“While there’s clearly a market for our publishing in digital form — and we take great care to render our publishing in a way that will shine digitally — revenue from those sales pale in comparison with our print sales, and with the digital sales of text-driven publishers,” she says. “We’re always open to investigating creative opportunities in digital form as we are with our print publishing. That said, whatever forms we choose to explore have to represent value to our consumers, creatively and financially. And it obviously needs to balance the human and technological resources required on our part. Let’s just say we didn’t get an A in Arithmetic when we launched our apps a few years back. But we did get an A for Effort — and I do think it’s important to experiment. Even if you fail — perhaps especially if you fail — there’s a lot to learn. It’s exciting to think how technology might expand the reading experience now and in the future.”