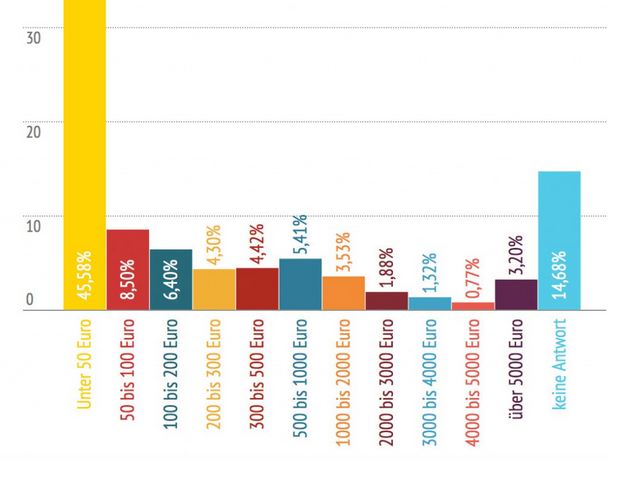 For the third year in a row, Matthias Matting (founder of selfpublishingbibel.de, Germany’s go-to source of information about self-publishing) and Hilke-Gesa Bußmann have conducted a poll among German indie authors to shed a light on the current state of self-publishing in Germany. Nearly 1,400 participants took part in the study and answered questions about the way they publish, how much they earn and what they hope for when collaborating with booksellers. Below are some key findings from the survey, as well as links to further results.

Indie authors are committing to long-term self-publishing. The study found that nearly two thirds (64.2%) of the authors surveyed have been publishing their books independently for over a year now. This number has steadily risen over the last two years: in 2013, 41.9% had been self-publishing for more than one year; in 2014, 54.6% answered that question with yes.

Self-publishing means having more control, and authors like that. When asked about their motivation to self-publish, authors answered unequivocally: having editorial and marketing freedom (65.9%) and staying in control of what happens when and where with their books (57.3%) are the main reasons for publishing independently, followed by “because it’s so easy”.

Distribution is becoming more varied. Self-publishing is becoming easier thanks to the recent growth of self-publishing platforms and service providers in Germany. Platforms like Bookrix, Epubli, Neobooks and Tredition will help authors create ebooks and distribute them. The other option for authors is to work directly with retailers like Amazon’s Kindle Direct Publishing or Germany’s homegrown Tolino (an alliance of Thalia, Weltbild, Hugendubel, Club Bertelsmann, Libri and the Deutsche Telekom) via Tolino Media. In 2014, the survey introduced a third option: selling directly to consumers. Just over 5% of authors said they sell direct, while working directly with retailers like Amazon and Tolino has increased by more than 8% from 2014 to 2015.

There are fewer hybrid authors. Although many (35%) have been publishing with a “traditional” publishing house before, more authors say they are sticking solely with self-publishing. In 2013, 51.6% of respondents reported publishing strictly as an indie author; that number rose by 3% in 2015. In 2015, 61% said they were self-published only, a 6% increase over 2014.

Further results of the study can be found here (in German):