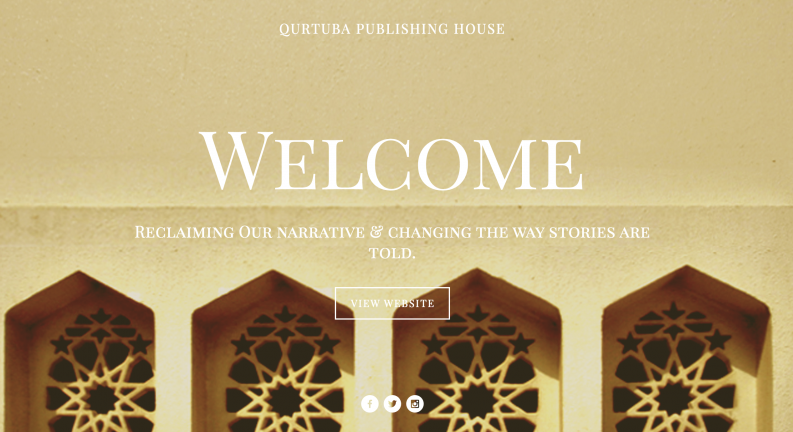 In Ottawa, three Somalian-Canadian sisters, 20-year-old Ilhan, 25-year-old Hodan, and 23-year-old Ayan Ibrahim, have launched Qurtuba Publishing House with one simple goal in mind: “We want to define our narrative, our stories, our perspectives and reclaim the voice of Muslims.”

A selection of Qurtuba’s first titles.

Ilhan, the company’s CEO, recently sat down with Muslim Link to talk about herself and Qurtuba. Some highlights from the interview are below.

It’s an interesting story. It was about a year before the idea for Qurtuba Publishing House arose, I attended an event run by two wonderful ladies called “Owning Our History”. This event was a panel discussion dedicated to inspire young Muslim woman to pursue positive changes in themselves and their communities. At the end of the event, they gave everyone a piece of paper, and asked us to write one goal that we promise to accomplish within one month’s time. I remember writing “Start changing our narrative”-and by ‘our’ I meant the Muslim narrative. The reason I mention this event is to acknowledge that such initiatives can have a lasting impact on its attendees, especially its younger audience. I cannot say what it was exactly that sparked a passion to work in media that night, however this goes to show that the power and influence of such events should not be underestimated.

My sisters and I have always had a passion to serve and support social growth and productivity in Muslim communities. As Muslims, we are facing challenging times. All over the globe, Muslims are suffering from social polarization, economic decline, and political turmoil. Mainstream media has immensely contributed to the negative portrayal of Muslims, creating a narrative that is neither factual nor representative of the global Muslim community. These challenges are increasing daily, and it is becoming exceedingly difficult for Muslims to reconcile what Islam teaches and the dynamic context of our world today. As any Muslim, we felt that we had a social and religious obligation to counter these growing challenges.

One night, we were discussing how awesome it would be to have an accessible resource for Muslims that focused on discussing relevant issues that Western Muslims are facing. Although there are many resources for Muslims out there, we felt there was a void between the acquisition of knowledge and implementation of knowledge in Muslim communities. We thought about creating a platform for Muslims that not only produced insightful publications, but to provide Muslims with practical tools to be able to develop solutions to the various issues Muslims are faced with. Ideas started blooming as we let our imagination run wild. We spent the rest of our night brainstorming and building upon this new idea, and by the end of the night, Qurtuba Publishing House was born.

What types of books Qurtuba publishers:

Qurtuba Publishing House wants to be more than a publishing house. We want to bring to the forefront knowledge-sharing platforms on issues that are pertinent to the needs of the contemporary Muslim. By producing accessible and cutting-edge publications on relevant issues to Muslims today, we want to tackle important issues that are often not represented or untapped by our communities. In order for us to be more than a publishing house, we need to do more than publish books. Qurtuba wants to have discussions and create spaces for Muslims to not just gain knowledge, but use that information in a constructive and productive way. Knowledge is rendered fruitless without practicality, feasibility, and most importantly, accessibility. When knowledge becomes accessible to Muslims, our communities become innovative, our youth become leaders, and we are able to contemporize Islamic perspectives into our current reality. That is the vision and spirit of Qurtuba Publishing House.