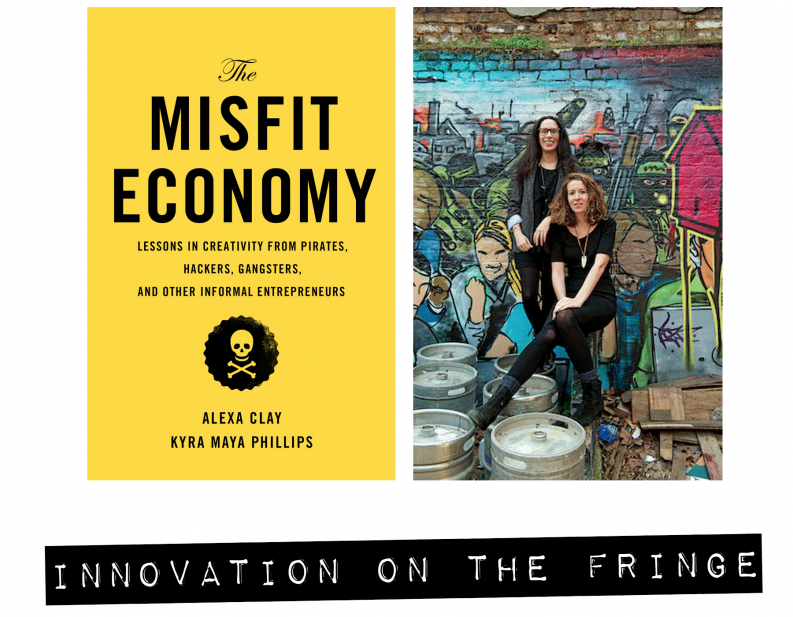 Misfits and outlaws know how to survive and there are lessons to be learned from  them in a time of change, argue the authors of the book “Misfit Economy.”

Perhaps we should stop trying to learn lessons from the likes of Elon Musk or Jeff Bezos and instead turn to figures such as the 18th-century English pirate Blackbeard or the late young hacker Aaron Swartz.

After all, Blackbeard “disrupted” the Royal Navy through innovations such as creating terror by his appearance rather than through violence and the egalitarian treatment of his crew. Writer, programmer and “hacktivist” Aaron Swartz created an early version the web feed format RSS at the age of 14, was a leader of the anarchic social news site Reddit (which became a focus for online activism), and his final act was to write a program whose alleged goal was to download 4.8 million tax payer funded documents from the subscription-based academic research database JSTOR that he believed should be shared with the public for free.

This is, in a nutshell, the argument made by Alexa Clay and Kyra Maya Phillips in their new book The Misfit Economy: Lessons In Creativity From Pirates, Hackers, Gangsters, and Other Informal Entrepreneurs.

“I wanted to bring attention to incredibly entrepreneurial individuals outside of the usual Silicon Valley suspects,” says Clay, “as there is a wellspring of ingenuity in the black markets and informal economy amongst hackers, pirates, gangsters and bootleggers that we hardly ever read about or study.”

“The book was conceived at a time when traditional economy was leaving a lot of people behind,” says Philips. “I grew up in Venezuela and it was the black market sector that gave people jobs and money.”

The misfit economy is an economy that is all around us but which we don’t always see. It is an economy that covers numerous different kinds of activity, from the informal and legal, such as the American camel farmers who worked together to sell unpasteurized camel milk, through to the clearly illegal — such as the Somali pirates who hijacked the Ukrainian freighter MV Faina in 2008 and collected a $3.5 million ransom. It is also an economy that is about hacking, hustling and pivoting when things don’t work out — and it is an economy about real-world issues that is born out of the need to survive.

For Clay, who sees herself as “a total misfit,” adept at disguising herself within traditional systems, it was a challenge to find pirates and hacktavists to talk to. “There is no LinkedIn for black market innovators; it was a tough process to find folks and one that took a lot of hustle and serendipity. It made me realize how much of a bubble I was in beforehand.”

Although the idea of the entrepreneur as some kind of an outlaw figure is a familiar idea, Clay and Phillips argue that while entrepreneurs and misfits may share similar traits, such as being natural risk-takers, they shouldn’t be confused as their traits are not identical. Misfits are also countercultural, self-questioning and vulnerable.

For Phillips, one of the key characteristics of being a misfit is the ability to “innovate creatively but frugally.” We are all used to stories of start-ups raising millions of dollars of funding, she says, but former prisoner Fabian Ruiz, who spent 21 years in jail for killing a man who he thought had killed his brother, “learned how to innovate in an environment that lacked resources by becoming perceptive. He could see 100 weapons in the room where we met him and this included the plastic chair he could melt down to make a razor.”

As to whether a victim of the Somali pirates, or the prisoners Clay and Phillips talked to, might feel somewhat differently about these misfits being held up as examples, Clay argues that “the premise of the book wasn’t to slip into traditional judgments of good and evil, but to create an invitation for people to empathize with incredible entrepreneurs who were often born into poverty or operating on the wrong side of the law.”

While pirates, hackers and entrepreneurial misfits may seem a long way away for those of us caught up in the grind of the nine-to-five, according to Clay and Phillips we all can embrace our inner misfit. “Everyone can be a misfit if they bring their full self into their work, as everyone is different,” says Clay. “However, it is not easy to do this as we are imprisoned by job descriptions and command and control systems that can cost us our values and ingenuity.”

Do Misfits Fit Into Organizations?

But do we actually want to be a misfit in an organization, since usually that is the moment to update our LinkedIn profile?

Clay says: “Certainly some misfits can be divisive — provocateurs and saboteurs within organizations; however, others can be incredibly collaborative and work to grow teams around their more disruptive ideas. While it is not ok for misfits to relish being the lonely misunderstood outsider, many do suffer at the hands of the institutional antibodies that want business as usual.” Giving an example not used in the book, Phillips describes how “the Occupy activists who tried to enact the lessons learned on the streets of New York back in their jobs quickly discovered that it was a struggle to make headway in large companies — and particularly in large companies that didn’t have the team at their heart.”

It is worth pointing out at this point that Blackbeard met his death in a savage fight with the Royal Navy and that Aaron Swartz tragically committed suicide after pleading not-guilty to a federal indictment for data theft and perceived victimization by the US Government who were threatening him with 35 years in jail and a $1m fine.

According to Clay, where the lessons of the misfit economy particularly can pay off is with those who are starting and managing organizations in industries like publishing. “There is a lot too that established companies can learn from misfits,” she says. “From 18th-century pirates to hacker collectives, misfit subcultures we studied were built on egalitarian principles. If you are starting and managing organizations, learning how to harness the entrepreneurial potential of employees and enabling greater self-governing behavior amongst employees is key.

“Hacker collectives for example are often a great example of decentralization and leaderless organization. More and more, mainstream companies are experimenting with these forms of informality.”

As to whether the rise of the misfit economy is an example of some kind of new post-capitalist collaborative economy, she isn’t so sure. “We are in a period of deep transition and in many ways we need misfits now more than ever who can help to mainstream economic alternatives. This doesn’t mean throwing out capitalism but perhaps rewiring it to further human well-being.”

Phillips agrees that the rise of the misfits is not about being post-capitalist, as she argues that even the so-called collaborative economy is still at its heart capitalism. It is about something much more basic than that.

“I think it is about survival.”