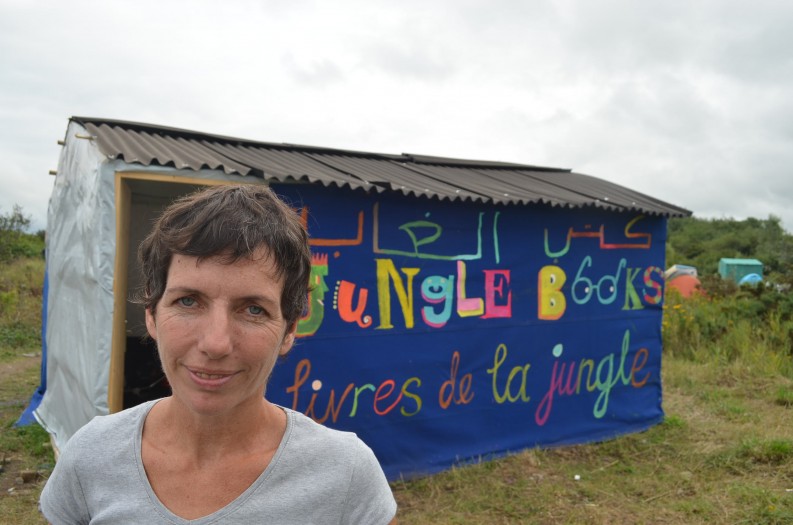 Roger Tagholm visits the “Jungle” migrant camp in Calais, France and reports a new library has been established, but still needs many books.

A makeshift library has just opened in the “Jungle” migrant camp in Calais, northern France. Called “Jungle Books” — well, what else? — it is supplied by voluntary donations and staffed by a stream of volunteers sympathetic to the plight of the refugees whose stories continue to dominate the news right across Europe. So far it stocks fiction and children’s books, dictionaries, reference books and business titles, and acts as a support to the camp’s school where a regular, daily timetable of classes is now underway.

It is the inspiration of British teacher Mary Jones — originally from Wales, now living in Amiens — who has been bringing items to the camp for years, but wanted to do something more. “Ever since the previous centre at Sangatte closed years ago, I’ve been keeping an eye on the situation here, bringing things when I could. I wanted to start something that offered real, practical help. Many people here are well-educated — they want to get on and they want books that will help them read and write English, apply for jobs, fill-in forms.

“We’ve only just set the library up and it’s been fascinating to see what people are asking for — short stories and poetry, for example — but we need Pashto-French dictionaries, Pashto-English dictionaries, Eritrean dictionaries, books in native languages. I’m planning to get in touch with the Open University to see if they have anything. Eventually, I would like the migrants to run it themselves, so that they don’t need me.” A view across Calais’ sprawling migrant camp, called the ‘Jungle’

The camp, nicknamed the “Jungle” by its floating population of refugees, asylum seekers and those simply seeking a better life, sprawls across low scrubland adjacent to the main road leading to the ferry terminal. It is here that migrants can be seen openly walking up the grass bank to the road when traffic slows and there is a chance of hiding in a UK-bound lorry. There is a more or less permanent presence of French police here, playing a continuous game of cat-and-mouse with the migrants.

The “Jungle” is so long established that it is beginning to be a microcosm of the outside world. Thus there are two churches, a mosque, numerous grocery stores, a handful of little restaurants, a bar, an outdoor barbers, a charging station for mobiles, a bike repair shop, a school and now, a library. It is divided up by nationality and language — Afghanistan, Syria, Sudan, Eritrea, Iraq — sometimes with each country’s flag fluttering high above the shacks. To wander its muddy lanes and snaking paths is to take a journey through some of the world’s trouble zones, though here the welcome is warm. “Bonjour,” “Hello,” “How are you?” people say as you pass. The Afghan flag gives a sense of home.

The place is hugely industrious, with all manner of construction, cooking and domestic cleaning taking place. One household had cut a plastic water container in half to make a plant pot and had nailed it to the wall and was growing flowers in it. Another was using an old sink as a boot-washing station. Little clusters of washed shoes suspended on tall sticks to dry are a frequent sight. Everywhere there are small fires and makeshift stoves and the smell of cooking.

Some of the houses are like the squat dwellings from the Hobbit. The shack belonging to the Sudanese men who invited me in for sweet (very sweet) tea was like a dark, carpeted cave. The only natural light came from the open doorway and the fire in the makeshift open stove at the far end. They were playing dominoes — very popular in the “Jungle” — and said they were happy to stay in France. They did not want to come to the UK. Their unofficial spokesman was cheerful. “You have to stay happy,” he said.“Because if you do not, you lose your soul.” Flowers growing outside of one home.

Having read so much in recent months about the society taking shape here, I wondered if books had any part to play — hence my decision to take an early morning ferry from Dover to find out. The allegation that this was “migrant tourism” is entirely fair. I won’t deny that I wasn’t extremely curious about the place. So, to ease my conscience, I decided to take as much with me as I could. The group Calais Migrant Solidarity is quite specific about what is needed — and it includes books.

Under “What people need on the ground” it says: “Books, dictionaries, texts, zines etc– in any and all languages. Especially, English, French, Italian, Arabic, Pashto, Farsi, Tigrinya, Amharic and Greek.” But also “pots, pans, utensils…bike repair stuff….card games, board games and any musical instruments.”

So, here’s what I took. First off, the books: By coincidence, I had just been reading Paul Harding’s Tinkers and with this lot in my backpack that’s what I felt like — a traveling tinker, out on the back roads, bumping and rattling along, hoping to spread the tiniest little bit of cheer. The trip was also a little nostalgic. The last time I had travelled to Calais as a foot passenger was in 1978 when I hitched to the Nice Jazz Festival. Cherished memories! Didn’t we all want to be Kerouac back then?

The hitching didn’t work this time and I had to walk the two miles to the camp, meeting a flow of migrants en route, many cycling, though one was hobbling on crutches having broken his leg three weeks previously trying to climb beneath a train. Abel was VERY pleased with his treats

I’d love to say that six-year-old Abel from Eritrea grabbed the books and showed them to his mum but, to be honest, it was the Rice Krispie bars that interested him more. He seized the lot and beamed, and then — and this was touching — proceeded, unbidden, to share them out with all the grown-ups he was with.

Meanwhile, inside the library, Kahasay from Ethiopia was browsing the books and had selected Stephen King’s The Green Mile. He has been in the “Jungle” for six weeks and, like so many, had had a grueling journey. “I came from Ethiopia to Sudan, then by Land Rover over the Sahara to Libya, by boat to Italy, and then on the trains to here. I want to go to the UK — I have tried so many times, to get on lorries, trains…”

The political arguments about the camp and the status of the migrants will continue for many months yet. In the meantime, “Jungle Books” will surely grow and one wishes it luck. It is an initiative that may interest Book Aid International, or any publisher who has titles in the languages spoken at the camp. Anyone wishing to offer support can contact Jones at maryjones@orange.fr