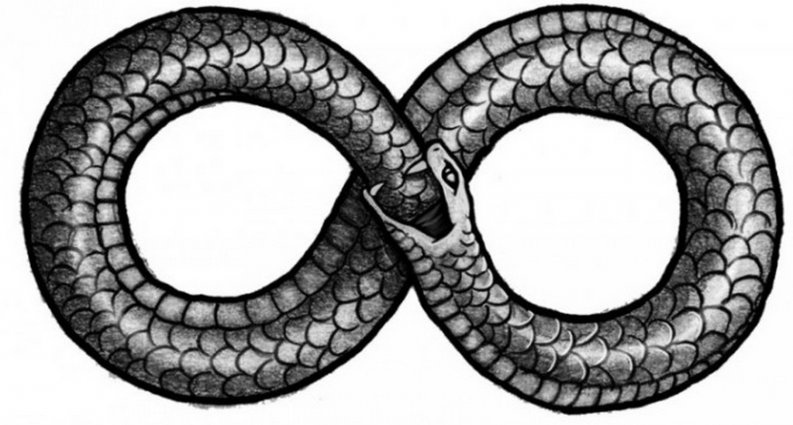 If Amazon continues this way, it is likely to resemble the mythical ouroboros…

The New York Times investigation of Amazon’s white collar workforce culture reveals that the company may be on the road to its own eventual demise.

I know several people who work at Amazon and a few are friends. They are smart people who want to do good work. But these friendships would likely end instantaneously if I ever repeated a single thing they said to me about working at Amazon. One even jokes that when he or she (see, I won’t even reveal their gender) wants to get fired, they’ll just give me a call and let me quote them on the record about the company.

So, the question on many people’s minds this week is whether or not the “callous” and “dystopian” workplace (Jeff Bezos’ own words) described in Sunday’s New York Times article about Amazon, “Inside Amazon: Wrestling Big Ideas in a Bruising Workplace“, is true to life.

I, for one, am inclined to believe it is true based on my own very limited, personal interactions with Amazon employees.

Way back in 2002 when I worked at Publishers Weekly, I called a friend at Amazon on the phone at his or her desk and when they answered, they nearly had a heart attack. “People here know who you are, they know we are friends, you can never call me here,” they told me in no uncertain terms. And whenever I visited Seattle, he or she was reluctant to meet me in person. They would eventually, but with reticence, and only at Elliott Bay Book Company during an author reading: something that would give them valid “cover” if they were seen to have been with me.

My friend, incidentally, never struck me as paranoid — at least they weren’t until they went to work for Amazon (and having since left the company, their disposition has changed entirely for the better).

It has been in the public record that Amazon squeezes its suppliers for as much “value” as it can get. There have been strong-arm tactics employed in contract negotiations for years. Yes, this is business — who can blame them for wanting to get the best terms possible? But you’d be hard-pressed to find a community in the book world beyond a certain subsection of self-publishers who genuinely enjoy doing business with Amazon.

And the question that popped into my head after reading the Amazon article is “to what end?” As the NYT points out, is it so you can get your order of cat treats or hard-to-find Frozen toy or coloring book incrementally faster?

As Bezos rightly noted in his personal response to the article, “I strongly believe that anyone working in a company that really is like the one described in the NYT would be crazy to stay. I know I would leave such a company.” And in a piece from Forbes, which further explicates an anecdote from the NYT piece, Bezos is depicted by a reporter who has covered him as someone who wrestles with his conscience more than he is often given credited for doing.

Perhaps Bezos does have a conscience and is appalled to learn what his subordinates may or may not have done in his name. But it is the subordinates that one has to worry about. They may not be required to take quizzes on the company’s values or, in the most extreme example from the article, take business trips in the days after they have miscarried a baby … all this is voluntary.

But we all know that getting people to volunteer to do something onerous and submit to outside control is the most indsidious form of manipulation.

But what is most worrisome of all is that you know there are over 1,000 other executives out there reading about Amazon’s culture, of its anonymous employee feedback system and relentlessness, and thinking to themselves, “what is a good idea … Hmmmm …” As media observer Jeff Jarvis notes in his own article, critical of the NYT article, “I sure as hell won’t want to see that trend spread to other workplaces.”

What also struck me in this entire conversation was a throwaway line in a post written by a current Amazon employee on LinkedIn, one referenced by Bezos himself in his response. It is written by Nick Ciubotariu, Head of Infrastructure Development, Amazon.com Search Experience (SX). In it, he notes that the subheadline of the article which reads, “The company is conducting an experiment in how far it can push white-collar workers to get them to achieve its ever-expanding ambitions,” is incorrect. Ciubotariu writes, “There is no ‘little-known experiment.’ That’s just silly. No one at Amazon has time for this, least of all Jeff Bezos.”

And, wait for it … “We’ve got our hands full with reinventing the world.”

That is the kind of rhetoric we have heard time and time again throughout history — be it in geopolitics or business — and sooner or later, those very same institutions or empires, corporations or militaries, self-destruct under the weight of their own ambition, with their leaders felled by their own hand or that of their subordinates.

If what is said about Amazon is true, it may very well be an ouroboros — the mythical snake that consumes its own tail.